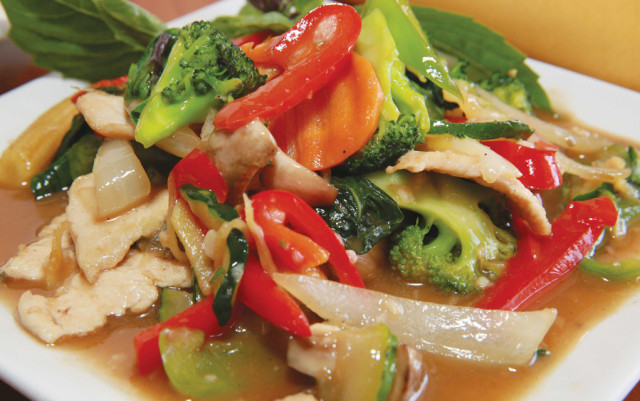 When I moved to Boulder several years ago, I asked the Comcast guy installing our cable for restaurant recommendations in town. Better to ask a local than rely on Yelp reviews and the like, I thought. So the cable guy gave us a list of about four or five restaurants, but he said none were more his favorite than Buddha Thai. And since then, Buddha Thai’s become a personal favorite of mine, too.

Buddha Thai is comfort food. You may find other Thai or Southeast Asian restaurants serve food with more flair or fuse in cuisines from other regions. But Buddha Thai has a steady stable of fresh, well-made favorites at an affordable price, all served in a low-key, relaxed shop.

Having worn into a Buddha Thai ordering groove, I branched out and ordered a whole bunch of menu items I’ve never gotten from them before: steamed dumplings, chicken satay, jungle curry, larb and garlic pepper dish.

Let’s start with the starters, which were the larb and the steamed dumplings. The larb was a salad with lettuce, tomatoes, onions and cucumbers, topped with protein (I chose ground pork) and chili powder. The whole plate was doused in lime juice. It’s a deceptively involved dish — you won’t think much of it when it comes on the plate, but it’s hard to keep from heaping forkfuls into your face. The pork was tender and seasoned lightly but well. The vegetables were fresh and cut into well-apportioned sizes. The lime juice and the chili powder, however, woke everything up on the plate, with the citrus not only brightening the lighter notes of the pork, but also serving as an adequate dressing for the salad under which the meat sat.

The dumplings were fantastic. They came in the shape of a giant bell, with an artful excess of ground meat and seasoning bubble out the top. Ground chicken was the house choice for the dumplings, and it was tender and so moist, indicating of course a well-constructed dumpling. The accompanying sauce was a ginger-soy viscous concoction that embellished the meat, which was so abundant in each dumpling the dip became a necessity.

The chicken satay was fine enough — lightly seasoned bookmark-sized rectangles of meat were skewered and then cooked to an almost glossy shell. They were a bit of time bomb, in that the longer they sat on the table, the harder the skin got. But piping hot and fresh, they peeled right off the stick, were close to tender and, most importantly, served as a good base for the peanut dipping sauce. The sauce was pretty close to opening a jar of natural peanut butter and throwing in a bit of spice — some may like it, some may not, but I did.

My favorite dish was the jungle curry. Like most, I imagine, I’m partial to creamy coconut milk curries, and Buddha Thai does them very well (particularly their yellow curry). But I was impressed with the depth of flavor and the pleasant consistency of the thinner jungle curry. I also used the jungle curry as an opportunity to get the hottest spicing Buddha Thai offers, and yes, it was super hot. Poured over steamed white rice, the curry dish included tofu chunks, roasted vegetables like green and red pepper, onion, broccoli, baby corn and mushrooms all in a thin chili, fish sauce and herb curry. It was a slow process to eat — stuffing a bunch in before the spice gets unbearable, then waiting, then going back in — but well worth it.

The garlic pepper dish was, by comparison, a little blander, but that may just be the context. Plump shrimp where mixed into a thin garlic sauce, and it was fine.

Buddha Thai was recommended to me, and it’s clear it wasn’t the first recommendation the restaurant has received. If you’re hearing about it for the first time now, I’m happy to pass along the good word.