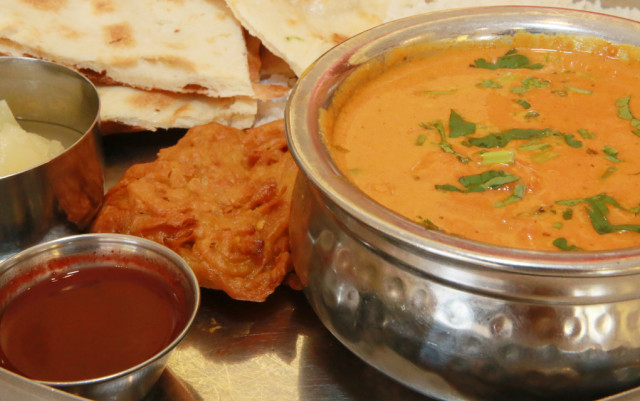 Curry-N-Kebob has to be one of Boulder’s most beloved hidden gems. It’s hidden because it’s scrunched between a Papa John’s and a Quizno’s, and despite how hard Peyton Manning tries, he’s not going to win me or many others over with that “Better Ingredients, Better Pizza” junk. Curry-N-Kebob is also a delightfully modest name — their food is good enough to call themselves “Vindaloo” or “Spice” or “Momo” or something, but they went simple and fun and endearing.

And that’s also an easy way to describe their food and their restaurant — it’s comfortable and lively but not loud; the food is inexpensive and simple but abundant and delicious with a lot going on beneath the veneer. It is comfort food to the max, yet there are opportunities to branch out into something unique. I reached for those unique dishes on a recent trip, having had (and resoundingly endorse) the standard curry and Northern Indian and Bangladeshi dishes they have lunch and dinner specials on every day.

So, I ordered the tandoori duck, the goat vindaloo and the baingan bharta. I also had a side of naan and a samosa.

The tandoori duck was exciting. A large half duck was slathered in a thick tomato sauce. The sauce had very deep flavors, almost like chocolate, and so it came off like mole. The meat underneath the sauce had a thin shell from the tandoor, and the meat inside was dark and tender. There were also thick slices of lightly sautéed peppers and onion, and with a selection of three-out-of-four heat, the dish had a ton of elements to love: spice, savory meat, crunchy vegetables and smoky cocoa sauce.

The baingan bharta was a free-for-all of comfort. Thick tomato and onion sauce was mixed in with evanescent eggplant and cream. The sauce brought out the fruity flavor of the eggplant, and the sauce tasted slightly sweet. There were also big green peas that provided a nice crunch and a beautiful aesthetic, and the general “OK, I’ll settle for this” flavor of pea. With naan and billowy rice, it was hard to stop the gorging.

The goat vindaloo was a lot less exotic than it seems, and certainly less exotic than the “Exotic dishes” whiteboard on which the dish was listed indicated. That said, it’s easy to mess up goat meat, and it’s hard to make it taste exceptional. At best, the goat is going to be passable, and surrounded by other stars, it might even be something you reach for. Goat’s main appeal is that it’s a cheap protein. In all these ways and more, goat meat is a lot like Mark Ruffalo.

The vindaloo curry had a deep, brown, earthy flavor, while the goat meat was generally mild. It was extremely well prepared without a trace of the grease that drips off goat meat in the cooking process. In fact, the goat was so mild that the best bits were the chunks that still had a little fat remaining — those were salty, fatty, moist and downright fantastic. I’m not sure if I’d go out of my way to order it again, nor is that really the implication at Curry-N-Kebob, but it was a good detour, and a demonstration of the sort of home cooking the restaurant is capable of.

So whether you want goat, duck, lamb, curry or whatever, you’re basically assured of a simple, cheap and excellent meal at Curry-N-Kebob. That’s why it’s such a local favorite.