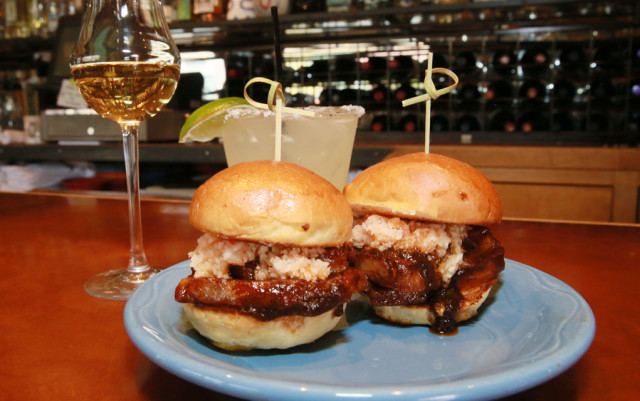 One of the first restaurants at which I ate when I moved to Boulder four years ago was Zolo Southwestern Grill. And that meal was stunning. I remember a big, fat slab of pork belly seared on one side sitting atop a bowl of mussels, which were simmering in a spicy tomato and onion broth. Beside that I had an extra anejo tequila that was smooth and fruity with just a hint of salt. It was a great meal, and I anticipated my return to Zolo shortly thereafter.

But as things go, I didn’t make it back to Zolo. And as time wore on, the romance of a great meal made it increasingly difficult to go back. How could Zolo live up to what I’d built it up to be?

And so four years later, this week, I finally returned having eaten pretty much everywhere else in Boulder County. It was a longer hiatus, obviously, than I had planned, but my return trip proved I had set no expectation high enough. I had nothing to fear this whole time.

On a recent early evening, we ordered the entire happy hour menu. It was epic and awesome.

We started with the basics: chips with guacamole and salsa. The chips were notable because they were warm and perfectly thick — not too crunchy, not too thin. The salsa was slightly chunky with good heat and some kind of fruity sweetness, either from peach or mango. The guacamole was simply and expertly prepared, with small, sparse bits of red onion mixed into the creamy avocado with cilantro, tomato and lime.

Now the good stuff. The pork belly sliders were excellent. The pork belly literally melted onto the soft bun, and the sensation was a lot like eating a roll that had been buttered with the finest butter in all of the Land of Lakes. There was slight heat from a chile spread, and a minor crunch from some pickled veggies, but that slider was all about the thick, evanescent piece of pork belly.

The pork ribs were also exceptional. Two meaty hunks of half ribs were lathered in rich, smoky barbecue sauce. The succulent meat fell right off the bone. The light char on the topside of the meat added a nice texture and better smoke. The herb rub on the ribs was excellent as well, though I devoured my rib too fast to parse anything particular out even if I could.

The chorizo stuffed dates were my favorite. The dates were wrapped in bacon and bathed in a “ranchero” sauce, which was close to the chocolate, spice and herb in mole. The dates had excellent consistency and the chorizo on the inside was bright, salty and spicy. The overall texture was all mush once it got into my mouth, but the flavors were so spot-on that I made a mental note that if the tonsillectomy ever comes back in fashion, I’ll needlessly get one, go onto a soft foods-only diet, and then eschew the traditional ice cream for the Zolo chorizo stuffed date.

The jalapeño relleno was about as good as a jalapeño popper gets. A large, long jalapeño was lightly fried after being stuffed with Haystack goat cheese. It wasn’t too spicy nor too greasy, and the goat cheese popped and brought out the fruit in the jalapeño.

The chicken wings were also well done. They weren’t battered, which is a good thing, and they were baked and lightly charred. The buffalo-ish sauce wasn’t spicy at all, but there was a fiery tomatillo salsa that came with it, which completed the wing experience.

We also had a serviceable fried oyster — oysters, once you fry them, sort of lose their point, in my opinion. They could be anything for all I know. But the slaw and cream sauce on the oyster was well prepared.

Lastly, the house favorite dessert of banana cream pie was a full indulgence and is definitely recommended. It was massive, with bananas, peanut butter, chocolate and whipped cream. Just like Zolo, it’s worth having much more often than every four years.