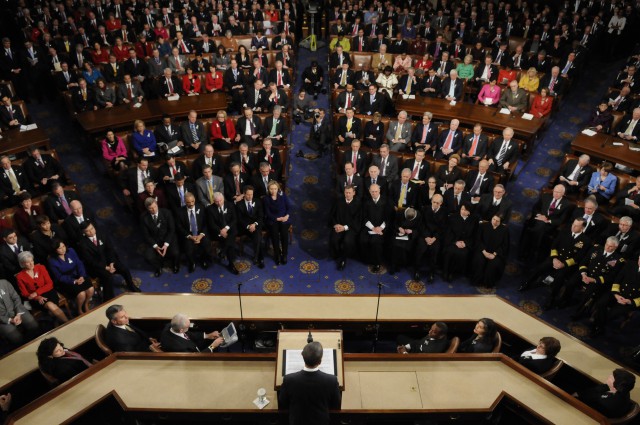 How many times do We the People have to tell you something before you get it through your big, fat heads?

Well, it can’t be helped. Being civil with you guys doesn’t seem to get us very far.

Thirty-eight years of empty promises, dissembling excuses and pious bullshit, and nothing changes. Who the hell do you guys think you are? Hosni Mubarak?

Last year we imported 4.25 billion barrels of crude oil and refined products, at a cost of $337 billion, an average of about $79.29 a barrel. In case you haven’t noticed, the price of crude oil is back up to more than $100 a barrel, and it’s heading north fast. And it will head north even faster, maybe past the record $147.30 a barrel set in July 2008, if the nascent revolutions in Egypt and elsewhere in the Middle East end badly — and unfortunately the scenarios in which they end badly are more plausible and more numerous than the ones in which they end well.

The upshot may well be gasoline selling at $4 or $5 a gallon or more by this summer and a double-dip recession next year. And a windfall of petrodollars for jihadists from Gibraltar to Mindanao.

So why don’t you guys get off your sorry butts and do something meaningful this time about getting the country free of oil imports?

Something besides throwing boatloads of money at wind and solar alternative energy projects that produce electricity, not gasoline, or at alternative transportation projects like high-speed rail that have a barely measureable impact on America’s automobile use.

Why not do something that will drastically cut U.S. crude imports, or short of that, will permanently destroy OPEC’s ability to fix oil prices?

For openers, you could start by passing the Pickens Plan, T. Boone Pickens’ proposal for substituting domestically produced natural gas for diesel and gasoline as the fuel for the country’s 18-wheel trucks and fleet vehicles (like buses, taxis and medium-duty delivery vehicles). Pickens reckons that doing this could cut crude imports by a third. Just as important, it would mean that the country’s commercial vehicles, the ones directly involved in the production of goods and services, would no longer be held hostage to imported energy price-fixing.

Legislation to implement the Pickens Plan has been sitting on your desks for the past two years (during which time we have spent more than $600 billion on oil imports). Passing it would be a good start.

But there’s a way you could permanently get the country off imported crude.

The
technology for turning both coal and natural gas into gasoline and
diesel fuel has been available for decades. The technology is mature,
and as a result of nearly a century of incremental advances in chemical
and petroleum engineering, it is financially competitive with
conventionally produced gasoline and diesel at today’s prices.

If
you want to break OPEC and its co-conspirators, build a couple dozen
synthetic fuels plants using these technologies, each with a capacity
of, say, 500,000 barrels a day. Figure that each would cost about $10
billion to $15 billion to build, about the same as a state-of-the-art
nuclear power plant or aircraft carrier. Funding two of them a year
would cost $20 billion to $30 billion annually, not exactly chump
change, but not a budget-buster either. At that rate, all 24 could be
funded in a decade.

That
would give the United States the capacity to produce 12 million barrels
a day of synthetic fuels from domestic coal and natural gas, or 4.38
billion barrels a year, an amount slightly greater than the total amount
of oil and petroleum products the U.S. imported in 2010.

What
might the fuel coming out of these plants cost? Judging by the
experience of Sasol, the South African company that pioneered modern gas
to diesel production processes and which has operated a
25,000-barrel-a-day plant in Qatar since 2006, it would be about $25 a
barrel — if the cost of building the plant isn’t rolled in. Of course,
Sasol has to sell its product at a price that covers the cost of
building the plant. A government-funded plant built for national
security purposes wouldn’t have to.

Building
those plants means that the United States could cut its fuel bill by 75
percent or more, which would do wonders for the economy. And reducing
demand in the international oil markets by 12 million barrels a day
would drive the price of Middle Eastern crude into the ground (so to
speak), which would effectively defund the global jihad and force
Islam’s excitable boys to get to heaven the hard way, by getting jobs
and being decent human beings instead of human bombs. It would also
defund several petro-pests; Hugo Chavez comes to mind.

And
just having the plants would probably be enough to keep oil prices
reasonable (and jihadists defunded) without ever having to fire them up.

Just
having the ability to produce 12 million barrels of oil a day at the
flick of a switch would make it possible for us to make our extortionist
pals in the Middle East an offer they couldn’t refuse: Set the price of
oil at a point where both you and us and everyone else in the world
will prosper, and we’ll continue to buy from you and not destroy the
value of your resource (provided you quit sponsoring jihadists and bring
us the head of Osama bin Laden, of course).

But
wouldn’t having the government deploy a fleet of synthetic fuel plants
be socialist? Sure — in the same way as maintaining a navy to defend the
country instead of relying on privateers is socialist.

Granted,
there may be other ways of getting the country off imported oil. If you
have any, instead of sending me the usual form letter response, why
don’t you tell me, with precision and candor, exactly what you would do
to replace 12 million barrels a day of imported crude.

I
don’t mean to be unkind, but after watching your performance for the
past 38 years, I’ve come to doubt whether you folks know how to go about
solving big problems anymore, including this one.

Go ahead, surprise me.