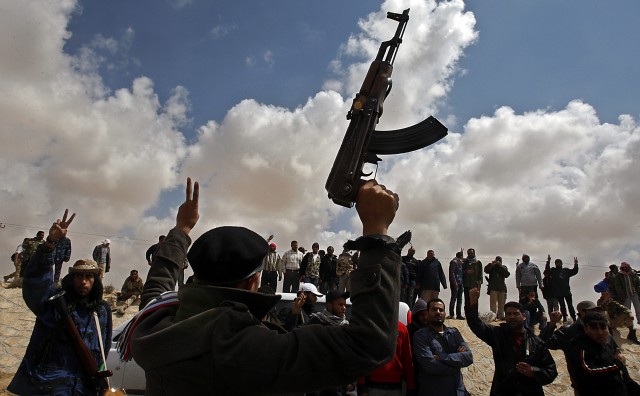 There seems to be a big debate going on in the Obama administration over whether we should arm and train the Libyan rebels.

That’s strange, because arming and training the Libyan rebels should be a no-brainer — for at least eight reasons:

1. They are doing the Lord’s work — assuming you believe the Lord (aka Yahweh, aka Allah) endowed men with certain inalienable rights, including life, liberty, the pursuit of happiness and the right to take down deranged tyrants who have become abusive of those rights.

2. They are fighting to take down Gaddafi, who apart from being an enemy of liberty, democracy and term limits, is a vicious enemy of the United States who will be an orders-of-magnitude worse enemy if he survives.

3. If they are not armed and, more importantly, trained, they will lose.

4. If they lose, the United States loses. NATO loses. The pro-democracy movement sweeping the Arab world loses. The Arab world’s tyrants will win. They will know they can put down mass protests with mass murder and that the world will let them get away with it.

5. Everyone who said “never again” after Srebrenica, after Darfur, after Rwanda, after the Holocaust, will lose. The world’s dictators will have one more reason to believe — as if they don’t have enough already — that the people who say “never again” never mean it.

7. Arming and training the Libyan rebels can be done without sending American ground troops into Libya. If the folks in Washington are so set against having the U.S. Army’s boots on the ground, they should give the company formerly known as Blackwater, or some of its many competitors, a call.

8. Arming and training the Libyan rebels is the best way to ensure that Libya won’t go Islamist. It’s all but certain that there are Muslim Brothers, al- Qaida members and assorted other Salafists and jihadists hanging around the Libyan revolution, just as there were Bolsheviks hanging around the Russian revolution in 1917, and there is no guarantee that, like the Bolsheviks, they won’t take over. But there is a lot less chance of that happening if the U.S. is actively siding with the revolution and helping it succeed by providing it with the tools it needs to do so.

It might drive the folks at the Rocky Mountain Peace and Justice Center wild to say it, but the principal way that nations that have arms industries gain influence and clout in nations that don’t is by selling them arms.

Supplying arms and help to a revolution can lead to enduring alliances.

Consider our relationship with the French, who sold us guns during the revolution and showed up with a fleet off Yorktown in 1782 to enforce a no-sail zone. It was the start of a beautiful friendship.

The surest way to ensure that we will have some influence in Libya after Gaddafi is out is to become the revolution’s armorer before he goes. And a sure-fire way to ensure we have no influence in Libya after Gaddafi goes, and to open the door to the Islamists, is to turn our backs on the democratic forces in the country while the fate of their revolution — and it is currently their revolution, not the Islamists’ — hangs in the balance.

But aren’t the Libyan rebels no more than a stunningly incompetent rabble in arms? Maybe, but chances are good that properly arming them and teaching them some rudimentary military skills can accomplish wonders.

If you doubt this, consider our own revolution. In 1775, America’s rebels were about as ragtag as they come. (How ragtag? Consult the lyrics to Yankee Doodle.) The first couple years of the American Revolution saw more panicked retreats and humiliating routs than American victories, and the American army that went into winter quarters (such as they were) at Valley Forge in 1778 was still a little better than a rabble in arms.

Fortunately, a foreign trainer and advisor showed up in the person of Friedrich von Steuben and taught the continental army some basic military skills. After that, things began to turn around.

The Libyan rebels are the product of a popular uprising. They don’t have to be convinced of the value of regime change and democracy. Their revolution is explicitly calling for those things, and they volunteered to fight for them. Those are the sort of revolutionaries that most deserve our help and can most benefit from it.