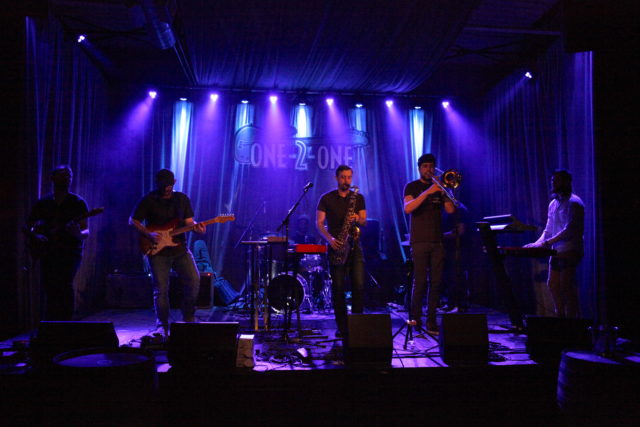 Progger isn’t the kind of band you might assume it is just from hearing the name.

Then again, it’s not exactly not what you might assume either.

Collins Dictionary defines “progger” as a “fan of progressive rock music.” The petulant sarcasm machines who fuel Urban Dictionary define a progger similarly, adding that prog is “a music style which is pretentious as fuck in which solos go on for like two weeks.”

Jokes and bad taste in music aside, it’s true: Prog has always taken hits for its grandeur, for its esoteric lyrics, for its theatrical fusion of classical music with the raw power and accessibility of rock ‘n’ roll.

But Progger isn’t prog. Not exactly.

These musically demanding subgenres share more values than not: Both developed in the late 1960s as part of the building counterculture rebellion happening stateside and in the U.K., and both require a Clapton-like mastery of an instrument and a deep understanding of music theory (learned or innate). Prog rock masters Emerson, Lake and Palmer regularly incorporated jazz improvisation sessions into their shows. (Check out the 1974 California jam on YouTube for a taste.)

More to the point, great progressive music — be it rock, be it jazz fusion — always achieves that paramount characteristic of rock ‘n’ roll: mass appeal.

Progger front man Brian Donohoe says the band’s name was a joke (the product of playing Frogger and listening to a bit of prog), but the moniker — and their winding, multifaceted sound — has prompted the question more than once: how does Donohoe define prog?

Progger explores the erudite edges of jazz without taking listeners on the kind of raucous and formless journey that can characterize the more avant-garde examples of the genre. The band sweetens the pot by dropping those smooth chords over dirty funk beats with just a hint of the building, swirling psychedelic sounds of prog rock.

Or, as one fan commented on Progger’s Bandcamp page, “some days you just need a soundtrack you can pilot a spaceship in a high-speed chase through a funky asteroid field to.”

“There is a prog element to it,” Donohoe concedes. “I mean, we have Iron Maiden-ish duel guitar harmonies and that’s super prog rock-y.” (Steve Harris of Iron Maiden was a progger, leading the metal band to cover Jethro Tull’s “Cross-Eyed Mary” and Beckett’s “Rainbow’s Gold” before offering up their own prog-tinged concept album Seventh Son of a Seventh Son in 1988.)

“If it doesn’t sound good it’s not good, no matter how sophisticated it is,” Donohoe says. “You’ve got a composer like (French impressionist) Maurice Ravel who had the most sophisticated harmonic palate of anyone who’s ever lived, but everything he made sounds beautiful because aesthetic was first priority. That’s the thing I’ve always tried to emphasize for Progger.”

Since its inception in 2011, the band has morphed from an Austin-based project to a multi time zone collection of in-demand touring and session musicians who have played alongside Grammy-award winners like Erykah Badu, Snarky Puppy and Chrisette Michele.

The band is finding some traction after releasing their third studio album, Scattering, last year.

Scattering marks the band’s expansion into a bicoastal project, featuring band members based in Austin, where Donohoe studied jazz at the University of North Texas, and members in New York, most notably percussionist Nate Werth and keyboardist Justin Stanton, both of contemporary jazz darlings Snarky Puppy.

With some help from Ropeadope, the band’s record label, Progger is even getting some international attention without ever having toured outside of the U.S. and Canada. The band’s stats on Spotify show that behind Manhattan and Brooklyn, folks in Buenos Aires, Argentina, are jamming to Progger the most. Next up on the list: Austin and Denver.

“I would love for Progger to get to the point where it’s really got its own two feet, [and] at least in the niche industry [become] a household name,” Donohoe says. “I think we’re actually approaching a tipping point for that. I think it’ll be self-sustaining in the next couple of years.”

Since the group is comprised of full-time freelance musicians moving in different scenes across the country, Donohoe says Progger rarely hits the road for more than two weeks at a time. All the more reason to catch them this time around.