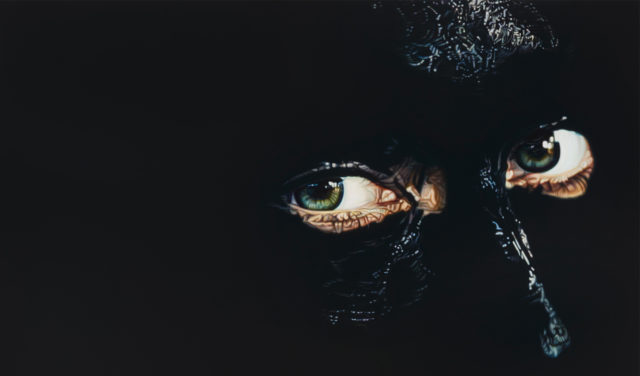 When the Denver Art Museum invited artist Ramiro Gomez to contribute to an exhibit featuring Latino artists, he knew right away he wanted to make his work site-relevant. When he met Lupita, a member of the museum’s custodial staff, he found his inspiration.

“I didn’t know what it would turn into when I met her,” Gomez says. “The more I talked to her, the more I connected to her and the more I found comfort within her.”

In many ways, Lupita reminded Gomez of his mother, who also works as a custodian, and their immediate connection allowed the work to become a collaboration. Gomez shadowed Lupita at work for a day, where he learned about her family and the tiring tasks of her job. He wanted his art to portray the hidden labor behind the country’s most prestigious institutions.

But by the time he began working on his installation for Mi Tierra: Contemporary Artists Explore Place, the museum had switched janitorial contractors and Lupita no longer worked there. Gomez knew he needed to reflect the turmoil the switch created in Lupita’s life, even after receiving pushback.

“It’s uncomfortable to be an artist painting about this work in spaces that treat the workers themselves as disposable,” Gomez says. “There’s an irony with it, the fact that my work is now displayed inside this museum where Lupita was my focus.”

Gomez’s final installation in the exhibit became a series of paintings and sculptures. The paintings displayed inside the museum explore Lupita’s identity primarily as a mother, daughter and sister, as well as a domestic worker. Gomez also set up two bronze figures of Lupita’s image outside the museum in an effort to shatter her previous invisibility, using bronze to symbolize the eternity of Lupita’s presence at the Denver Art Museum.

“It might seem like a simple figure, but there is nothing simple about an immigrant person’s existence, especially in these times,” Gomez wrote in a Facebook post reflecting on his installation. “This is for those little moments that won’t be recorded in history otherwise, the simple acts of labor that contribute whether we recognize them or not. She no longer works there but I choose to recognize that Lupita was here, that the custodian is present.”

Although Lupita and her story are at the forefront of Gomez’s work, she is representative of the millions of people who work physically demanding jobs to help aid the success of institutions like the Denver Art Museum. Throughout the installation, Gomez decided to leave Lupita faceless. It’s a technique he likes to employ so that his pieces become doorways into the life of an entire community, instead of being representative of a single story.

“Facelessness allows someone to dig a little deeper and explore within themselves,” Gomez says. “I’m trying my best to create empathy, create a moment of reflection and contemplation for the viewers… ‘Lupita’ for me is a symbol of something greater that is happening.”

“Mi tierra” is Spanish for “my land,” and the Mi Tierra exhibit demonstrates how 13 different artists explore space in the American West. There is no common theme between the 13 installations other than they represent how Latinos in the United States experience space and displacement differently. The installations also reflect how Latino individuals have adopted a land that may or may not accept their presence, and have called it home.

Artist Jaime Carrejo grew up in El Paso prior to the strengthening of the border in 2008, which allowed him to experience the land between the United States and Mexico as continuous. While Carrejo was away at graduate school and teaching at the College of Wooster in Ohio, he always looked forward to visiting home and looking out over the Rio Grande, a landscape that bridged the flamboyant colors of the houses in Juarez with the suburbs in El Paso. But when he came home in 2009, the once-uninterrupted landscape was now divided by a corrugated-metal wall. After spending several years reflecting on the significance of this new physical division, Carrejo began working “One-Way Mirror.”

The installation is made up of two videos filmed by the artist, one broadcasting a sunrise in Mexico and the other a sunset in the United States. The videos are separated by a 10-foot-tall divider made of one-way surveillance glass, which at times appears translucent and at other times opaque. Standing next to the 10-foot wall at the art exhibit feels intimidating, but after realizing the border fence between El Paso and Juarez ranges from about 18- to 21-feet tall, one can’t help but feel overwhelmed.

“It’s really monstrous architecture, it really goes through a lot of the South West,” Carrejo says. “The main overarching theme is what does that type of architecture say about us as a people? When that architecture is a reflection of us, I think there’s some really tough questions we have to ask about ourselves.”

Carrejo worked on the project from 2015 into the summer of 2016, at a time of growing hostility toward Mexican immigrants in the U.S. Although the intention of “One-Way Mirror” remained unchanged, the impact of the work heightened. Carrejo wants spectators to contextualize the dimensions of the fence at the exhibit, contrasting it to the 40-foot border wall the Trump administration wants to build.

Man-made constructions like the border wall also inspired artist Daniela Edburg’s piece in Mi Tierra. She explores how artificiality breaks our relationship with the natural world; By focusing on nationality, we forget about the natural process of change. In “Uprooted,” Edburg widens the scope of the immigration discussion by placing it in a larger scale of time.

Edburg spent five weeks as Denver University’s Hamilton Visiting Artist, familiarizing herself with the people and geographical makeup of Colorado. She visited different regions, interacting with both the people and landscape across the state. This inspired her to contrast the history of seven natural elements — cheat grass, lichen, river rock, red rock, tornadoes, grassland and alpaca — with people living in Colorado.

“The way we perceive time is completely relative,” said Edburg during the Hamilton Visiting Artist lecture at DU. “In ‘Uprooted,’ one story is told from the perspective of a rock, from the perspective of a plant, an animal and then human time. Even within animal, human, botanical or geological time — it’s still different whether you’re taking the long view and looking at it as a species, or if you’re looking at individual stories and individual life spans.”

“Uprooted” is set up to resemble an old Victorian home; hanging on a wall are nine portraits of individuals Edburg met in Colorado but who have roots in other parts of the world. Each individual is holding one of the seven natural elements as a way to parallel the natural process of change and adaptation in both nature and people.

The artwork of Gomez, Carrejo, Edburg and others in Mi Tierra is meant to illicit an understanding of the Latino experience, and since it opened to the public in February, the exhibit has received a lot of positive feedback.

However, art can also draw backlash and shortly after the opening, Gomez’s bronze figure, “Lupita,” located outside of the entrance of the museum was vandalized with chalk. Then recently, the same bronze figure was tackled and ripped off the ground, influencing the museum to remove it completely until a safer spot is found.

Gomez has taken both of these occurrences of vandalism as a developing part of the artwork; as a way to highlight the strong sentiments against a group of people or culture, in this case the working-class Latino community.

Regardless of the political and cultural backlash, Mi Tierra strives to show the diversity of the Latino experience. Thirteen different artists share 13 different representations of life in the Western United States. By inviting its audience to analyze the narratives often absent in portrayals of Latino life, Mi Tierra is threading the agency of Mexican immigrants and Mexican Americans back into the conversation, depicting the reality behind their experiences.