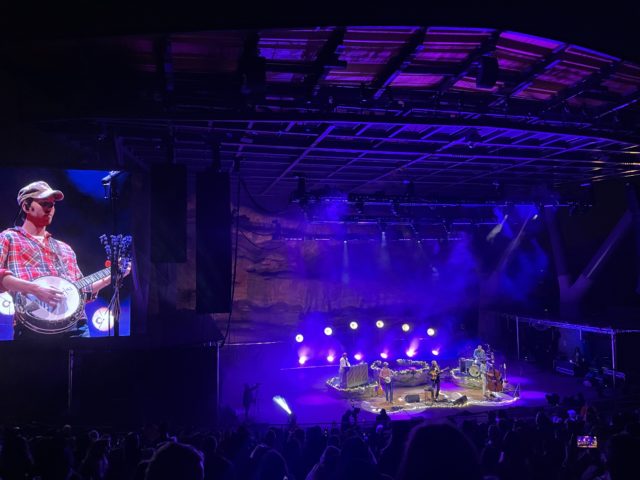 It wasn’t supposed to rain on the second night of Caamp’s two-night stint at Red Rocks Amphitheatre. But it’s Colorado, and droplets began to fall from the sky just as the Ohio folk quintet took the stage.

“We’re getting a little more moon water,” frontman Taylor Meier told the crowd, referencing the deluge the crowd experienced the night before. “But you don’t look like you’ll melt.”

The group took the double header as an opportunity to perform understated and less popular songs from their catalog, forsaking most of their radio hits in favor of rare live performances. Take “Mockingbird Song” for instance, a quick duet off their first project, 2016’s eponymous record. During the Oct. 4 show, Meier played the acoustic guitar while his childhood friend Evan Westfall accompanied on both the banjo and harmony, surrounded by twinkly lights, boughs of lavender and a spotlight. As the other members of the group re-emerged, bassist Matt Vinson took the opportunity to gush about his bandmates and the rarity of such a performance. Joseph Kavalec — whom Meier simply introduced as Joe — took the quick break to light another cigarette, which he let dangle from his mouth as he played the keys, ash accumulating until it fell, scattering into the wind. It was a continuous feature for the musician throughout the night.

Mid-set, Meier also lit one up as he grabbed a microphone and performed “On & On & On” while walking through the VIP section, hugging presumably his family and friends. It reminded me of the last time I smoked, bumming cigarettes off the banjo player of a bluegrass band in between sets years ago on a summer Friday night on the porch of the Gold Hill Inn. Despite the sold-out crowd, Caamp’s stage presence and friendly banter was reminiscent of the intimacy captured at that Gold Hill show — even with the grandeur of Red Rocks looming in the background.

The band took the Red Rocks opportunity to bring out special guests and friends, like Jesse Henry from Columbus, Ohio, whom Meier told the crowd taught Westfall and himself everything they know. They also showcased songs off of their latest album, Lavender Days, out June 24 and featuring backing vocals from Nathaniel Rateliff and Katie Crutchfield from Waxahatchee. Numbers like “Apple Tree Blues” and “Lavender Girl.”

Overall, the show was a combination of slow, rolling folk ballads and quick-tempo numbers, highlighting Westfall’s prowess on the banjo, which he plays like the guitar. The entire set, Meier’s giddy smile belied the musician’s awe at taking the iconic stage, as he as much admitted toward the end of the show. After a four-song encore, ending with 2020’s single “Officer of Love,” the guys grabbed some bundles of lavender to hand to the crowd, took a quick bow, snapped a few photos, and walked off stage to raucous applause.