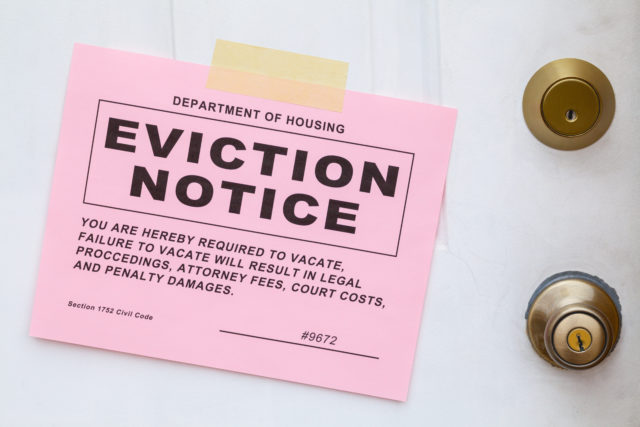 One of the worst housing crises — if not life crises — a tenant can face is eviction. The U.S. is in the throes of one of the worst rental housing crises in its history, with record high rents and a record number of evictions nationwide. Thousands of Boulder renters are “housing insecure,” paying well over the 30% of income that Housing and Urban Development (HUD) defines as the maximum amount Americans should pay for housing costs.

Colorado has some of the worst eviction laws in the country for tenants, and few know what rights they have to contest an eviction. Legally, evictions are called Forcible Entry Detainer (FED), a term originating in the late 1800s and still used today.

After a long lapse in tenant activism, a number of renters from the Boulder chapter of the Democratic Socialists of America (DSA) started doing some tenant union organizing. “There are other ways as a tenant you are in a precarious situation, and we were all worrying about eviction all the time,” said DSA member Ruy Arango, although none of the DSA members ultimately faced eviction. “Anyone who lives [in Boulder] and doesn’t own a home can attest [that] being a tenant is a difficult thing,” he added. They saw ballot initiatives called No Eviction Without Representation (NEWR) that won in New York City and San Francisco and were inspired to look more closely at the evictions in Boulder.

In 2019, DSA members went to eviction court for a year, where FEDs were heard every Friday, collecting evidence of what they witnessed (this was before Colorado’s pandemic-induced eviction moratorium). As DSA members suspected, most tenants didn’t appear in court, and of those who did, only 2% were represented by an attorney. Not surprisingly, the court ordered default judgments against the no-shows, and most others were evicted anyway. They also found that 88% of landlords had legal representation in court (most of the time, the larger landlords didn’t even appear). Predictably, landlords won the vast majority of eviction cases.

After data collection was complete, the DSA group decided to launch the No Eviction Without Representation Campaign for Boulder’s November 2020 ballot. They chose eviction support because it didn’t infringe on state laws, and could be legislated at the local level.

They consulted with the San Francisco NEWR campaign and a local housing attorney to develop language that would give all tenants, regardless of income, the right to legal representation in court and access to a fund for back rent, so as to avoid eviction. That fund and legal assistance would come from an annual $75-per-unit tax on landlords.

“We were all volunteers — we all put in a lot of time and not insignificant amount of our own money into the campaign,” Arango says.

The collection of initiative signatures and the campaign itself was all done against the background of the pandemic where millions were no longer collecting paychecks and often faced evictions. While there was a relatively quick mobilization of federal resources to help with supplementary income, and a state eviction moratorium was put into place, it was all temporary.

Despite predictable opposition from the landlord lobby, the measure passed by 58% and created the Eviction Prevention And Rental Assistance Service (EPRAS), run by the city of Boulder.

Arango is now a busy graduate student and hasn’t been very involved with EPRAS. He is under no illusions of the program’s limitations.

“The only thing that is going to stop the housing crisis is moving away from a market distribution model for housing,” he says. “Markets are unable to meet human needs.”

I’ll take a deeper look at the success of EPRAS and a Denver attempt to enact similar legislation in the next column.

This opinion does not necessarily reflect the view of Boulder Weekly.