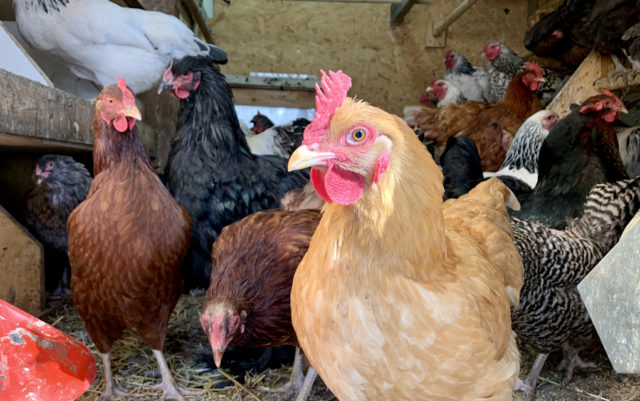 On the top of Flagstaff Mountain, 100 chickens are living their best lives.

A rooster, a handful of show chickens and dozens of egg-layers squawk and dawdle inside a large green coop with circulating humidity-controlled air, heat, running water, lights and a deck with heated coils, all of which overlook a breathtaking vista of mountain peaks and valleys.

“We had a smaller coop that we first built and a bear just came and tore the door off the hinges and killed all the chickens,” says the coop’s owner, Andreas, who culls eggs and delivers them to pick-up spots in Boulder under the business name Alpine Eggs. “After that I figured I was going to build myself the Versailles of chicken coops, which is metal-reinforced, so nothing can get in there, ever.”

The coop is fully insulated and kept at about 50 degrees, though the chickens are hardy enough to survive cold winters on top of the mountain. Ventilation fans were installed to prevent moisture from accumulating on the chickens, which would then freeze when the chickens walked outside. It’s atypical, but working, Andreas says.

“Online it recommends against all this. Don’t heat it, it’s unnatural, they don’t need it, but these are the happiest chickens. They are laying so well,” he says.

The chickens have five acres on which to roam. Andreas and his business partner and coop manager, Katie Woodmansee, planted herbs and cultivated soil out of compost in order to grow grass, necessary because much of the land on the property is rock. Letting the chickens roam is important for the quality of the eggs, Andreas says.

“The idea is the more natural forage they get, they get that really dark yellow yolk, especially with the more insects they eat,” he says. “They’ll eat anything, they’re omnivores. They’ll eat bugs, grass, seeds. If they catch mice they’ll eat mice.”

Woodmansee and Andreas are also sprouting and fermenting grains in a small shed in order to cut the sizable costs of purchasing feed,and to provide better nutrition for the chickens — fermentation helps the chickens digest grain. Also in that shed is the preliminary equipment for a breeding station.

The operation feels like a world away; it’s quiet, there’s a green dinosaur sculpture from an old Sinclair gas station, Sherman, the guard dog, bounds around the grounds, and some of the chickens (the cochins) have big furry feet. It took a little while for Andreas to get used to after moving from the East Coast, but he says it’s been a blessing to have the responsibility of managing a coop, forcing him away from his day job he works remotely from the house on property.

“I have my office upstairs, and if I don’t make a point of going outside, I could just be upstairs in my office all day. But now I have to get out in the morning, I have to do physical exercise, carry things, you know?” he says. “And it just engages you with the locality a little bit more.”

Coincidentally, Andreas has passed that lesson onto his chickens, building a heated “lounge” for them to hang out in so they can get out of the coop every once in a while, even in frigid temperatures.

“They can just go out in the middle of winter and go under there when it’s too cold or too windy for them because otherwise if they’re in [the coop] too long, they may beat up on each other or things like that. They get kind of mean to each other,” he says.

The eggs that come out of the operation are worth the extra effort. Rich, well-sized and herbal, they come in a variety of hues from blue to red. They’re available for $6 per dozen in a temperature-controlled cooler at the end of the property at 5541 Flagstaff Road or at off-mountain Boulder pickup locations at 1065 Orange Place and 698 Walden Circle. Go to facebook.com/AlpineEggsBoulder for more information.