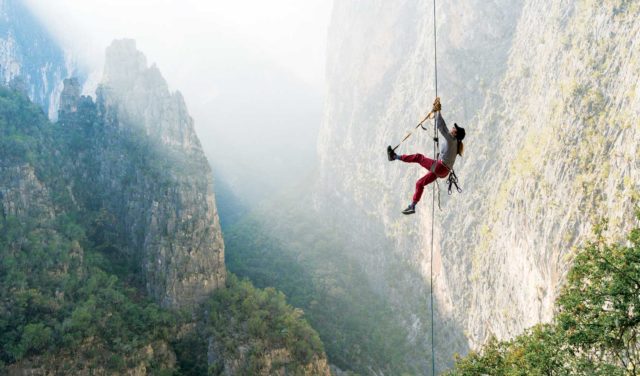 A few years ago, Julie Ellison stood at the base of a climb in Indian Creek. While waiting for the route to open, she’d gotten her gear ready, and yet she’d been overlooked not once, but three times by the others at the crag — all climbers, all men — as they repeatedly asked, despite her clear presence and intentions, who was next in line for the climb. It was as if they couldn’t believe it was her.

Ellison, Climbing magazine’s editor-in-chief at the time, revisited the experience in a fall 2016 Editor’s Note: pushing past the men to climb the route, she considers “printing out a copy of my climbing resume and handing it out at crags from here on out.”

It wasn’t the first time she had to justify her presence, strength and experience as a climber, and she’s never been alone in that affair. That same year, a Climbing poll showed 76% of female climbers reported being “treated as weaker or less experienced by a person of the opposite sex.” Around this time Ellison was deep in conversation with Shelma Jun, founder of the digital platform Flash Foxy and the wildly popular Women’s Climbing Festival. They both saw the truth of rock climbing’s ethos — that its framework, like most of the world, has been constructed by and built for men, despite the longtime participation and ambition of women.

For decades, climbing media has fortified this scaffolding of male design. Of the 91 main segments in high-production climbing films produced before 2017, only 11 even showed a woman climbing. Well aware of media’s dexterous power — its ability to simultaneously disassemble and rebuild status quos, and not only celebrate but also legitimize the presence of non-male, non-white participants — Ellison and Jun agreed on the need for a film about the abundance of badass female climbers. If no existing production company was going to take women as seriously as men, they themselves would have to create, as Ellison put it, “the lady’s REEL ROCK.”

The duo quickly onboarded two friends — Colette McInerney, a seasoned professional climber and photographer/videographer, and Leslie Hittmeier, a writer and editor. Together, despite zero feature-filmmaking experience between them, the four women founded Never Not Collective, raised nearly $80,000 on Kickstarter, then taught themselves how to make a movie.

It was a long road filled with mishaps and laughs, long days and expensive errors, team member changes and creative solutions. But now, three years later, their first project, Pretty Strong, will premiere to a near-sold-out crowd at Boulder Theater on Jan. 10. It’s the first-ever all-female climbing film to hit a big screen.

In the climbing world, film occupies its own particularly holy place. “Dosage-style” films have existed since the ’90s, serving stylistic and action-packed clips sewn together, illustrating the cutting-edge climbs and climbers of the given moment, not unlike the best-of highlight reel a high-school parent might send to a faraway college. These films move across the internet like a virus; when REEL ROCK debuts each year, climbers flock to Boulder Theater with religious fervor.

Nina Williams, who starred in a 2019 REEL ROCK segment, is one of 10 women featured in Pretty Strong. Others include Boulder’s Isabelle Faus, Hazel Findley, Jessa Goebel and Katie Lambert. Before filming with Never Not Collective, Williams had never before worked with an all-female production team: “Most production teams are mostly or entirely male,” she says.

Being a part of Pretty Strong is exciting: “It’s a film that’s long overdue, and yet very timely as climbing becomes more and more popular,” she says. “Pretty Strong contributes some of the first high-quality, female-centric storylines to a sport that could use some fresh perspective.”

Since 2012, Hilary Oliver, a writer and editor of outdoor media, has been contemplating the ways gender is (and isn’t) portrayed in outdoor industry films, blogs and stories. It’s not hard for her to see the treatment of women in media as an echo of society at large. “Climbing and the outdoor industry are small microcosms that reflect the gender roles, rights, expectations, fears and frustrations of the world in general,” she says.

In the last eight years, she’s recognized a slow shift toward more gender inclusivity. “Not enough to provide equal representation, but certainly more than I was seeing seven or eight years ago,” she says. “I still often see stories, films and ad campaigns that make me cringe. Women athletes are often asked questions men never would be asked.”

Pretty Strong, for one, won’t be asking questions catered directly toward gender — what’s it like having your period, being a mom, facing sexism, being the only woman, etc. while climbing? — an apolitical decision that’s resonated with some, and infuriated others. After a preview article and the trailer were published, Never Not Collective received more than 100 comments from women with concerns that gender-specific issues would not serve as a main focus of Pretty Strong.

Mélise Edwards, a Ph.D. student and longtime climber, explains that not addressing gender head-on in a female-centric climbing film “reinforces the idea that in order to be taken seriously, women need to abandon the notion that we struggle in unique ways due to our gender and intersecting identities.”

“It is necessary to recognize the historical context in which women, notably underrepresented women, were denied rights and opportunities to their white and male peers,” Edwards continues — such rights and opportunities can range from deeply sown access issues to the financial means climbing necessitates, to sponsorships and media coverage. She, as others have echoed, would like to see concepts like these tackled directly. “Recognizing the identities of the women who are flourishing means we recognize the importance of historical context and the incredibly oppressive forces they had to navigate in order to succeed. This is so important.”

Ignoring the differences in gender, simply subbing out men and filling in women, continues to uphold the male-centric, white-perpetuated scaffolding, she argues. “Who benefits when we ignore gender and refuse to acknowledge the difference gender may play in our lives?” she asks. “Whose comfort is prioritized and who benefits from this? Who does this serve?”

Ellison explains that, from the very beginning, Pretty Strong was intended as a classic dosage-style film, packed with try-hard moments in Rocky Mountain National Park, Yosemite Valley, Mexico, Appalachia and more. Never Not Collective’s July 2017 Kickstarter, which received $79,383 from 1,481 backers, stated outright: “This isn’t a film about gender imbalance or the sexualization of women or what it’s like to have your period at the crag.”

Ellison says they chose this style for a number of reasons. Namely, McInerney had 10 years of archival footage documenting the try-hard moments of lady climbers around the globe. And in journalistic form, they elected to “show not tell” different experiences women have at the crag, on big walls, bouldering and generally figuring themselves out while working through difficult moments. If a woman so happened to have her period or face sexist comments or work through past trauma, then they were going to document it, but they weren’t going to lengths to bring it up themselves.

And going back to 2016, the time the Pretty Strong idea formed, Ellison says, “We just needed more representation on the screen. We just needed more numbers. We needed more women out there doing cool stuff … In that time we’ve seen this evolution of more of the intersectional ideas.”

As Edwards continues to push for more representation in climbing media, she wonders how Pretty Strong can be turned into a wider dialogue. “I felt like this film valued the comfort of it’s largely white and male audience (the dominant [identity] in the climbing community) and that this prioritization came at the expense of women and underrepresented groups in the climbing community,” she says. “Claiming to ignore gender and race among many other things usually benefits the most privileged in our society who would rather not confront the ways in which other people struggle, because this would mean confronting the ways in which they have unfairly benefited throughout their entire lives.”

After receiving messages from Edwards and others, the women behind Never Not Collective publicly addressed concerns with a letter on their blog. Their original idea of “‘progress’ came from our privileged position as cisgender white women,” they wrote. “Many women have a vastly different experience.”

Ellison says, “What we’re really hoping is that this is the first of its kind, so that there are an infinite number of other films and types of content to follow. It can’t be everything to everyone, but it is one small step.”

To Oliver, the step feels significant: “For a whole generation of young people to see an entire feature film of women crushing, instead of seeing a token woman shoehorned into a film, will surely be impactful.”