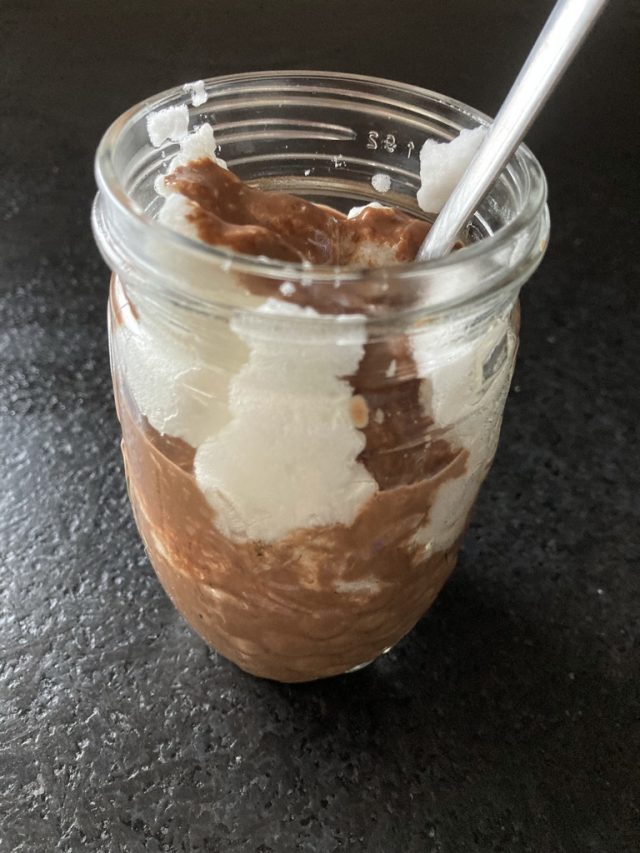 The hot cocoa in my life had never been acceptable. It was always too thin and runny. Too much like liquid, and I didn’t want liquid. I wanted a dense chocolate cloud in which to lose my sense of direction. To my great joy, I finally solved the mystery of how to manifest this vision into reality.

The body of this drinkable soufflé comes from whole eggs. I start by following the example of the Viennese, who famously add egg yolk to their cocoa to create a decadently smooth, glossy brown emulsion. But unlike the Austrians, I don’t neglect the whites. Rather, I beat them stiff, and then whisk them into my cocoa.

Unlike whipped cream and other culinary foams, stiff whites won’t dissolve in heat. Their enduring density comes from the egg white proteins, aligned by the action of the whisk into fiber-like structures that persist in the chocolate-y brew. The egg whites make the cocoa so thick and so puffy it’s like drinking a chocolate cloud as the chocolate cloud drinks you.

On New Year’s Eve, enhance the drinking chocolate with Kahlua. The following morning — New Year’s Day — add some of this puffy cocoa foam to a cup of coffee, where it will float like professionally steamed milk. Without mixing with the coffee, the cocoa will still manage to hitch a ride in each sip. As a pair of stimulants, coffee and chocolate act greater than the sum of the parts, because the theobromine in chocolate and caffeine in coffee are mutually enhancing as you stare piercingly into the blank canvas that is the year to come.

When hot cocoa can be simultaneously so thick and so silky, anything is possible. So be firm with your principles, flexible with your expectations, and perfect with your hot cocoa, and you will crush 2023.

Here is my recipe for the thickest, fluffiest and most satisfying hot cocoa on the planet. It’s your shield against the cold dark days to come. And you can make as much as you want, without a prescription.

On low heat, melt the butter. Add the vanilla and chocolate chips, and mix together without letting anything stick or burn. Add the cocoa powder and stir it in, quickly followed by about half of milk to dissolve any lumps and prevent burning. When it’s smooth, add the cream, nutmeg and the rest of the milk. Slowly bring the cocoa to a simmer, whisking constantly.

Separate the eggs, putting the yolks and whites into separate mixing bowls. As the cocoa heats, gently add a teaspoon of cocoa to the yolks, stirring vigorously. Do this again and again until the temperature rises. This tempers the yolks, making them heat resistant, so we don’t end up with  scrambled eggs in our cocoa. Add the hot, tempered yolks to the pot of hot cocoa. Stir it in well. Turn off the heat.

While the cocoa cools, use a whisk to beat the egg whites stiff.

If you aren’t immunocompromised or otherwise wary of undercooked eggs, you can scoop some of those stiff whites into a cup and pour the cocoa over them, stirring in as much or little as you wish. The bland flavor of the egg whites makes for a fun contrast with the cocoa, and you can eat it with a spoon.  Alternatively, let the cocoa cool to room temperature. Fold in the whites and gently reheat, whisking in the whites until perfectly smooth and thick as wet cement. However you serve it, you’ll need a spoon to finish the job.

To float some of this foam on coffee, spoon some into a cup and pour the coffee into it.  Then drink your coffee through the cocoa, as you would sip your brew with any nutritious breakfast.