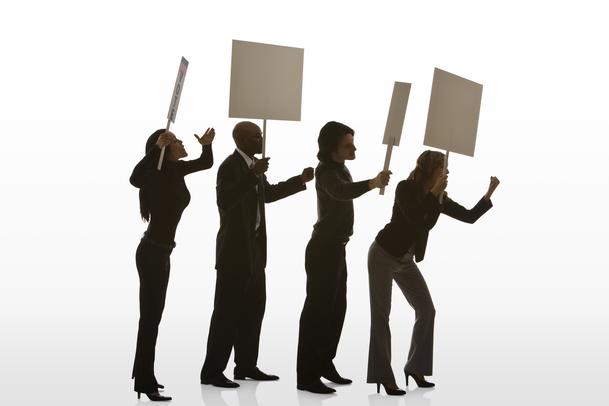 The call and response was loud.

On a chilly Saturday evening on Dec. 17, some 40 boisterous demonstrators outside Ash’Kara restaurant at 1043 Pearl St. in downtown Boulder were polite but angry. The event was hastily organized after three of the store’s employees had been fired. They had been scrooged over for the holidays.

They just happened to be on a union organizing committee. Their union, Communications Workers of America (CWA), doesn’t think that is a coincidence.

The workers say they are organizing because they’re upset over a phony “fair wage fee,” a lack of job security and overall poor working conditions. David McGuire, one of the employees who was fired, says, “I love working at Ash’Kara. My coworkers are kind, interesting, compassionate people. The food we sell is really wonderful, sensitively sourced, and much more interesting than most food to be found in Boulder.”

However, he wants the public to know that when they come to the restaurant, “They’re supporting a business that actually helps its employees and doesn’t misrepresent itself as more noble in intention than it is. That’s why our union is important. “
Restaurant workers who interact with the public get tips. But kitchen staff do not.

Many restaurants around the country have instituted a “fair wage fee” to help out “back-of-house” employees. Boulder Reporting Lab recently published an article about these fees at some Boulder
restaurants.

McGuire was the longest serving member of the staff at Ash’Kara in Boulder. He says, “Slowly, over the course of the time that I worked there, I watched as the amount of money each member of the team got began to dwindle, despite sales being steady or increasing, staffing cuts, and changes to the menu that increased our check average. The pay for back-of-house was always bad. Despite the claim that the 20% included on every check (the fair wage fee) went towards ‘making sure every member of our team’ was paid fairly, every back-of-house staff member took home about $13 an hour after taxes. Some of that money was coming out of the fair wage fee, but did they ever make extra on a busy week? No. The fee was subsidizing the payroll.”

He adds, “After a while, a few of us noticed that the fee wasn’t going to the front-of-house much either. A short time after that, I found out that some of the salaried managers were also being paid out of that pool. Not the tips servers earned on top. That would be illegal.”

The CWA has filed unfair labor practice charges with the National Labor Relations Board against Ash’Kara Boulder (and specifically owner Josh Dinar) for unlawful termination of pro-union employees and for refusing to recognize the union after a clear majority of employees vocalized support for it.

Their letter to Dinar said they had formed a union and requested that he “voluntarily recognize our Union and respect our rights to organize and collaborate without retaliation or interference as guaranteed by federal law. We aim to work together with Leadership to address problems and opportunities to create a healthy, honest, productive and profitable work environment we can all be proud of.”

The letter mentioned some changes they would like to see:

• Fair compensation for all employees — including Back-of-House employees — paid
not out of the Fair Wage Fee, but by the Restaurant Ownership, and more transparency around everyone’s pay and how it is calculated
• Appropriate cost of living increases commensurate with inflation and changes in our community
• Reasonable staffing levels
• Health Benefits for all employees (or the option to opt-in to such benefits)
• Sufficient training for new hires, coaching of existing employees and opportunities for learning and career development at
Ash’Kara.”

I reached out to Dinar by phone and email to get his perspective. He told me that he preferred to communicate by email rather than phone. I emailed him a list of pointed questions from the workers.

“Around 11 p.m. on Friday December 9 we received an unexpected email from the Union demanding recognition, and we learned that by the afternoon of Monday December 12 the Union had already filed a petition with the NLRB,” Dinar wrote in reply. “Because the Union already started the process with the NLRB, we believe each of our staff members should have the opportunity to vote in a secret ballot election regarding whether they want to be represented by the Union. This is the best way to ensure that each employee has a voice. If the Union wins the election, we will work with the Union in good faith. We cannot comment on personnel decisions, but we schedule our employees based on business needs, and, business has been slow in recent months.”

In the meantime, the three employees were suddenly told they have been re-hired.

CWA attorney Will Reinkin told me the union is glad the three employees have been re-hired, but the CWA isn’t withdrawing its unfair labor practice charge.

The struggle for workplace democracy goes on.

This column has been edited to include a quote from Josh Dinar that was provided after print deadline.