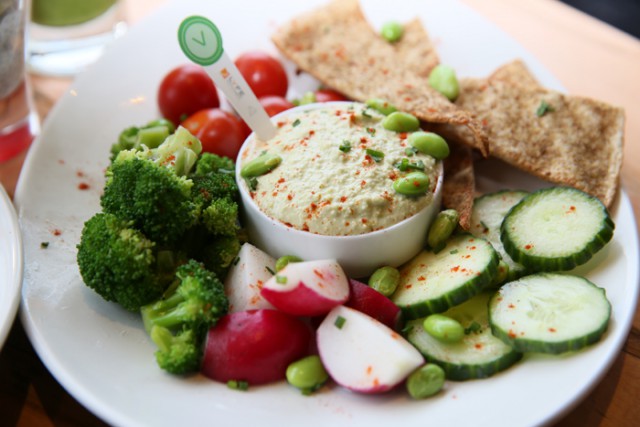 Regardless of whether you’re on Team Offal, Team Slow Food or Team Molecular Gastronomy, a consistent theme in modern culinary thought is the idea of rejecting an industrialized food system, either to maximize the variety of experience, source effectively, or have an intimate knowledge of what you are eating in order to better hack your metabolism.

That’s what makes Lyfe Kitchen, which opened at 1600 Pearl St. in Boulder in October, something of a question to food reformers about what the restaurant is really about.

The California-based chain specializes in meals that top out at 600 calories, with salads as the default side instead of fries and a definite health focus in everything from the kale on the menu to the greenery used to give the decor a soothing vibe. There are separate menus for various dietary restrictions. From the health standpoint, this sort of menu, especially as a chain, is a giant win.

But what sets Lyfe Kitchen apart from other members of the rapid-service-but-good-food movement is that Lyfe Kitchen founder Mike Roberts built the business model around what he learned in the more than 20 years he was a top executive at McDonald’s, a decidedly industrial food system (even with Roberts’ attempt at a vegan McNugget in his time there). And even with the upgrade in the quality of the chow, those McStrategies still show around the edges. The servers may be able to find your table to deliver the food you ordered at the counter through a fancy GPS platter, but their commitment and knowledge of what you ordered is fast-food lackie level, not the dedicated field of study one finds in a small farm-to-table restaurant — which probably has a lot to do with why the Hibiscus Beet Lyfe Water this reporter ordered never arrived. The burger may be from tasty grass-fed beef, but it is still fed through the same automated oven used by Burger King, and was most definitely not butchered in the back room, as artisan chefs are wont to do.

The end result is a restaurant that looks, tastes and costs very much like a foodie cafe, but maintains the sterile and disconnected feeling of fast food.

That’s not judge ment, however, just questions of personal value worth considering. There are a great many things to like about Lyfe Kitchen, especially on the menu.

The buffalo chicken wrap had a nice shot of spice that made up for the fairly blah flavor of the whole wheat tortilla, and it had a nice contrast of textures between the warm and tender chicken, and the cold and crisp vegetables. A bowl of sweet corn chowder with chunks of potato and pepper was just the thing to cut through Boulder’s sudden cold snap. And one of the best items on the menu, the roasted brussels and squash served with dried cranberries and a dijon vinaigrette, is a tangy and surprisingly filling delight.

But no matter what you order, if you’re the sort of person who seeks out a carefully-curated and health-focused restaurant like Lyfe Kitchen, it’s a bit tricky to eat there and not find yourself at least wondering about some of the issues above, and wondering how much difference it makes without addressing the single biggest issue people face in eating healthy: price. Lyfe Kitchen forces us to ask ourselves if the growing cultural consciousness of food issues is just about its health merits, or is it about something more?

Or perhaps Roberts has just found a way to profit off the back end of making people fat for the last two decades.