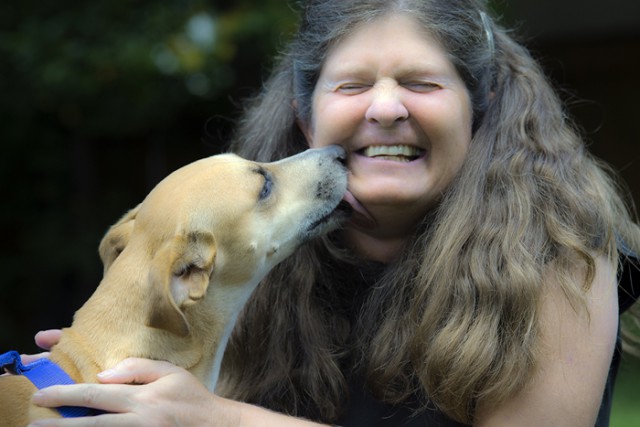 For two years, while Alex Masarie worked in the Peace Corps in San Juanito, Panama, developing clean water sources for the town of 220 people, he fed one of the many dogs running around the town. Carmensita was named for the nearly 90-year-old abuelo who owned her, Señor Carmen, but didn’t feed her.

“He barely had enough time and energy to feed himself, much less the dog, so Carmensita hung around with us because we had more scraps available,” Masarie says.

Masarie and his wife, Lauren Hayes, started to see more of her around the mud house in which they lived.

By the end of his two years in San Juanito, Carmensita was going everywhere with him, hiking for miles up into the mountains, through the jungle, every day to visit water sources and the homes they were supplying.

They watched her have two litters of puppies, and then to feed them, would run down the road for more than an hour to a restaurant where she’d be fed scraps, then run back to feed her puppies.

When the end of their time in the Peace Corps was reached, he says, they just couldn’t leave her behind.

“We fought the idea for a long time because it’s a different lifestyle out there, she was free to run around without a leash all day every day, but I think the bottom line was that the old abuelo who owned her, the grandpa, wouldn’t take care of her,” Masarie says. “It was either we take her, or she probably wouldn’t have made it.”

The town they lived in was a close-knit community, where they knew everyone by name and it was common to drop by someone’s house unannounced to talk about crops and community happenings — passear is the verb to mean just that. It was a hard-working Catholic community that took enormous pride in their church and their school.

While dogs in town seemed to piece enough food together scavenging, veterinary services for animals were tough to come by. So Hayes helped organize a spay and neuter clinic, facilitating food and lodging for veterinarians who came to Panama to treat the dogs there. In two days, those veterinarians spayed and neutered 83 dogs, Carmensita among them. The dogs were also given tick treatment and basic vitamin injections, and their teeth and ears were cleaned. Word had spread out into the area and people walked hours to come to the temporary vet clinic, many of them bringing multiple dogs — one brought four dogs, another six.

Once before, Masarie had gotten a dog rescued out of Panama, one that had tumors and was in need of serious help. He searched for months for a home for that dog in Panama, first, and then moved to relocating it to the U.S., working with charitable organizations to get the dog out of the country. Now, he says, that dog is happy and “fat as a pig.”

So he and Hayes decided to do the same for Carmensita. He bought her from the old man who owned her for $5. The man tried to sell him two dogs for that price, he says, but Masarie said because he was leaving the country, he could only take the one.

When it came to getting Carmensita out of Panama, the primary challenge was transportation, Masarie says.

“There’s really only one set of buses that’s available, and they are not overly excited about taking a dog on the bus, so we kind of paid some bribes, and said, ‘We’ll pay you twice a passenger and promise that she won’t throw up,’” Masarie says.

They got her vaccinated, then took her to a cargo building in Panama City where an airline ran a program to transport pets to and from international destinations. His mother was on the receiving end in Colorado, and Carmensita has been staying with her in Longmont since the summer.

Masariem who now lives in Fort Collins, comes to visit and takes her out on runs. She’s also gone on a four-day backpacking trip in Indian Peaks with him. She did great, he says, but she still gets cold adjusting from Panama’s tropical weather to Colorado’s snowy hillsides.

“Since coming back to the states, she’s been more and more like a pet instead of this wild, brave campo dog,” he says.

She did arrive with a tick-carried disease — ehrlichiosis — that was treated with antibiotics and she has since recovered. Masarie says she’s eating well and her energy level is high.

While she’s obviously well loved in the Masarie family, because Masarie has pet allergies that trigger asthma and his mother travels frequently, they’re still looking for a permanent home for her. Local dog rescue organization Summit Dog Rescue is helping with that search.

“The key with her is someone who is going to be very active. She’s a dog that can run every day and she can keep up with your average running pace,” Masarie says. “That would be the perfect situation for her, someone who runs daily.”

“There’s no laws to protect them and there’s no infrastructure like shelters,” says Emily Wolf, founder and director of Summit Dog Rescue. “They just run the streets and suffer until they die.”

Medical procedures, even ones considered as routine as spaying and neutering, can often cost a full day’s wages.

Carmensita is among the first international candidates the rescue has worked to re-home.

For her, and any other dog that lands in Boulder County, Wolf says, the future looks bright: “Boulder County is like the lottery win for any dog.”