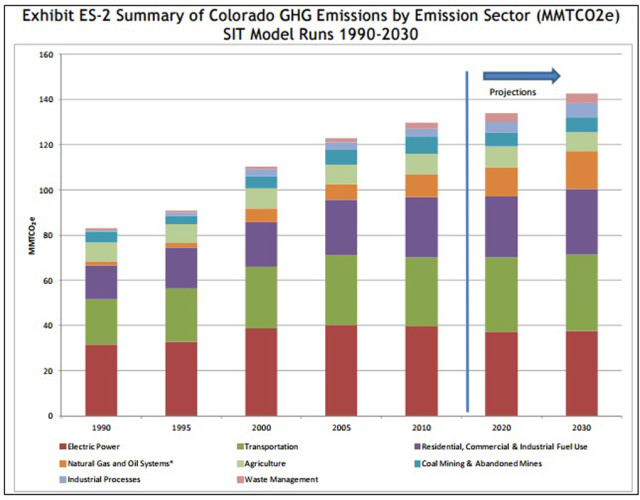 On Feb. 10, 2016, the Colorado House of Representatives narrowly passed a bill aimed at strengthening the state’s climate plan. Unveiled in September 2015, Gov. John Hickenlooper’s climate plan lays out strategies for helping Coloradans reduce their carbon footprints and prepare for the impacts of climate change.

What the current plan doesn’t do, however, is set specific goals for how much carbon pollution the state plans to reduce and by when. House Bill 16-1004 would force the governor’s office to make these commitments.

Critics of the climate plan, like the advocacy group Colorado Coalition for a Livable Climate (CCLC), argue that the lack of specific goals or new energy initiatives renders the plan meaningless. Kevin Cross, a spokesman for CCLC, told Boulder Weekly last year that the threat of climate change to Colorado requires specific and fiercely ambitious goals. The best path, he said, would be one that swiftly eliminated all carbon emissions in the state.

“What [the atmosphere] cares about is the concentration of carbon dioxide and other greenhouse gases in it,” he said. “That’s really the bottom line. We cannot be complacent saying that we’re doing all these great things if they’re not resulting in very significant greenhouse gas emission reductions.”

The current climate plan is the second time Colorado has tried to comprehensively address the causes and impacts of climate change. In 2007, Gov. Bill Ritter released the first such climate plan, which did set ambitious goals to ease Colorado’s carbon pollution. Based on 2005 levels, the plan called for a 20 percent cut by 2020 and an 80 percent cut by 2050. The current plan does not address these goals at all.

While the proposed bill also does not address these goals, it would compel the state to create specific goals and periodically evaluate them.

Since the first plan, Colorado has met some important climate objectives. For example, the proportion of renewable energy sources like wind and solar rose exponentially in the last decade, from less than 1 percent in 2005 to nearly 15 percent today.

But as CCLC points out, the Colorado Department of Public Health and Environment projects that the state’s carbon pollution is only going to get worse, not better.

Instead of a precipitous drop in carbon pollution, recommended by a majority of climate experts, emissions are projected to rise about 7 percent higher than 2005 levels by 2030. The largest increases are expected to come from processing natural gas and oil.

The Colorado Senate still has to vote on HB 16-1004 after which Gov. Hickenlooper would have to sign it. If the new bill becomes law, it may give Colorado another tool to make smarter decisions about climate change, which has become a serious threat to the ecology and economy of the state. A report published last year, commissioned by another bill in the Colorado legislature, showed that Colorado has already warmed significantly thanks to greenhouse gas emissions.

The report also argued that the state is vulnerable on many fronts to current and future climate change, including the impacts of new diseases, less predictable water supplies and reduced snowpack for water and recreation. It also projects that heat waves, droughts and wildfires will become both more frequent and more severe.