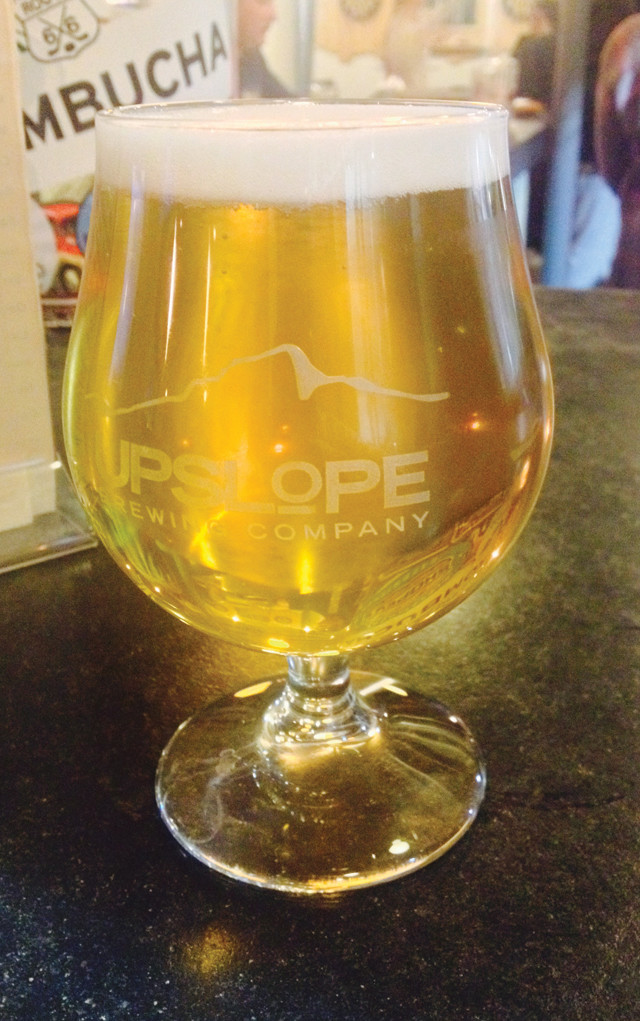 The grätzer, also known as the grodziskie, is a Polish-style, sweet and light beer with low alcohol content, low hops, high carbonation and a distinct smoky flavor. That smoke is derived from the grain, which undergoes a unique process.

In order for the beer to be a grätzer, wheat must be dried directly over a fire of burning oak logs. This imparts strong smoke aroma and flavor into the wheat, a process that doesn’t happen in more traditional drying methods where hot air is diverted and doesn’t directly hit the grains. The direct smoke also helps preserve the beer and ensures a long shelf life.

Grätzer has always typically been made with a low alcohol content — around 3 percent ABV — and Upslope’s variety comes in at 3.5 percent. What separates Upslope’s variety from traditional grätzers is, of course, the addition of bacon. Upslope brewers added 40 pounds of cooked bacon in the boiling process, along with noble hops. Adding the bacon at that stage, as opposed to fermentation or aging, ensures food safety while also extracting flavor from the meat.

What results at the end of the brewing process for Upslope is a goldenrod yellow beer with ultra-fizzy carbonation and a delicate, pure-white head. It’s served in snifters, which given the low alcohol content and the drinkability of the beer, are emptied very quickly.

The aroma is strongly bacony. Not like the smell of cooking bacon, but the smell of post-sizzle bacon that’s been hanging out on a communal breakfast table plate waiting for you to pick it up and eat it. There’s also a bit of grassiness and sweetness in the nose, but when you order a beer with bacon in the title, you’re basically just smelling for the nosegay of bacon.

The first sip is weird. The second sip is better. And then you’re fully adjusted to the components of the beer on the third sip. It’s really light. Like you’ll get a thicker consistency out of one of those fruit-juice-added carbonated waters. And yet there is a deep smoky bacon flavor that your tongue associates with crunch, salt, savory and thickness — elements that just aren’t there.

Anyway, you buck up eventually is the point, and once you get a few sips in, the bacon flavor resembles, identically, bonito flakes — dried and smoked tuna. And that sounds gross, but it’s not. And it makes a lot of sense that bacon and light wheat beer would combine to create that flavor. It is moist, light, smoky and salty, the perfect flavor-child of Upslope’s design.

When you get about halfway through, the novelty of the bacon does wear off, as does the strength of its flavor, and you’re left with an ultra-light sweet beer, so that’s not great. But for the creativity, and its uniqueness, the bacon grätzer is worth a few sips.

Putting the craft in cocktails

A family malt and a farm brew

A Square Peg for a Spare Keg