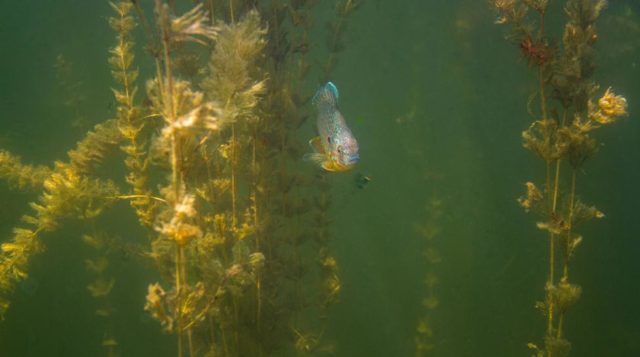 EWM is a highly transmissible invasive aquatic plant that causes disruption to ecosystems and recreation when established. It spreads easily from waterbody to waterbody, catching rides on fishing equipment, boots, paddleboards or boats.

“Eursain watermilfoil is the number one priority invasive aquatic plant in the state,” says Kate Dunlap, who works in the City of Boulder’s Utilities Department.

Twice a year, Colorado Parks and Wildlife (CPW) takes a look at the Boulder Reservoir for EWM and other invasive species. In the middle of August, a fragment of EWM was found for the first time. Dunlap says a DNA test was used to confirm that the “floating fragment” was indeed EWM.

But that’s all EWM needs—one fragment—to spread to a new waterbody.

If a fragment settles in sediment and grows roots, it forms a new plant colony. EWM also grows through plant runners and seeds, although this is more common when it is already established in a waterbody. CPW found no rooted EWM in Boulder Reservoir. The perennial plant grows early in the season and up to two inches per day, which gives EWM a jump start on native plant growth. By early summer, the mostly-submerged plant can form dense tangled mats on the surface that impede swimming, boating and fishing.

EWM can also clog intakes and outlets, causing taste and odor issues with drinking water. Boulder Reservoir Treatment Plant treats water mostly from Carter Lake, but the reservoir is a valuable water supply for the region and a backup water supply for the city of Boulder.

Boulder Reservoir has enforced a strict watercraft inspection program for the last 13 years to protect the area’s water supply and also the reservoir’s recreational uses, inspecting every incoming watercraft for invasives. Watercraft are decontaminated and/or quarantined if invasives are found.

Since the EWM fragment was discovered, the city had begun inspecting watercrafts leaving the reservoir too.

Visitors are also encouraged to clean fishing gear and boots of any plant debris, and draining and drying boats before going to another body of water.

Dunlap says it’s hard to stop the spread entirely because of how many different ways EWM can travel.

“There’s really no way to know how it got into the reservoir in the first place,” she says.

The extent and location of EWM in the reservoir is not fully known. At this time of year, it is difficult to find EWM because the water levels are so high and EWM looks like northern water milfoil, a native species.

CPW will return to the reservoir later this fall to conduct a more in-depth study of the area when the water levels are lower. The city will develop next steps based on the findings of that vegetation survey.