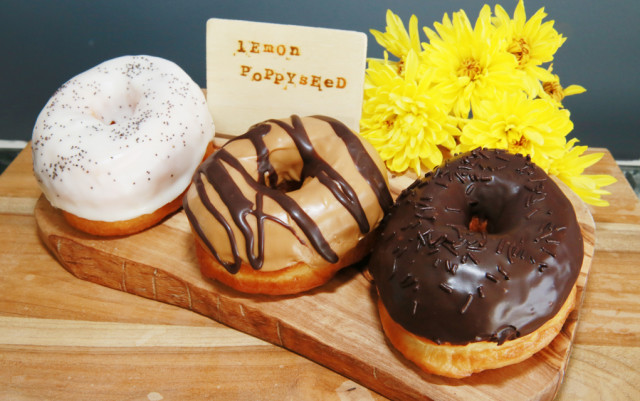 Boulder County has had a tumultuous relationship with the doughnut in recent years. Reputable chain bakers like Winchell’s, Daylight and LaMar’s have held court, but when local doughnut shop Dizzy’s died, nothing came in to fill its void. So starved for donuts were we, that a new Dunkin’ Donuts had lines out the door for two months when it plopped down in Boulder several years ago.

Of course some restaurants and shops serve up specialty doughnuts in the county, but it’s odd that Boulder hasn’t re-embraced the doughnut boutique, which boomed, what, 10 or so years ago, but has had some staying power. Now, in Louisville, the specialty doughnut shop has returned in BlueBox Doughnuts.

The store is quite the boutique. On a recent visit, one sterling representative of each of the daily doughnuts was displayed on a pedestal under spotlights behind a glass case. The pastries beckoned, plump and colorful, and quite frankly, there wasn’t much else to look at in the store — the doughnuts are the thing. (That said, there was at least one fritter and one brioche bun displayed.)

The idea is to take the doughnuts to go, for now it seems, so I ordered a half dozen treats and a brioche, which amounted to just about everything BlueBox was selling that day. Varieties of their baked goods change daily, with what seems like six to 10 varieties available each day.

The doughnuts were placed in a Tiffany’s-blue sturdy doughnut box, and the brioche was thrown in a white paper bag.

Shortly after, I set about the awesome task of tasting the doughnuts by cutting out segments of each and lining them up like a doughnut flight. Now I’m admittedly not a huge dough-nut to begin with — hold for uproarious laughter — but I can get behind inventive takes on culinary classics, which is what BlueBox has clearly set out to do.

Each doughnut, though distinct in flavor, all had the same foundation. The doughnuts were thick, moist, buttery and sweet, like high-density popovers or croissants. The base had a slight, pleasant chew, and on some of the ’nuts with less or no frosting, the crusts were perfectly crispy. The doughnuts’ base retained structure throughout eating, and what’s a silly point, but nonetheless important to parents in new cars and the generally meticulous, the frosting and glazes weren’t globbed on so as to make eating the doughnuts a downright fiasco.

The espresso was probably my favorite doughnut. It was robustly flavored with more of the scent of brewed coffee than the taste of it. There was mild sweetness, and a nice crunch from espresso bits on top.

Another favorite was the chai variety. It was glazed and modest-looking, but the flavor was spot-on. Often with chai-flavored treats, people go too far, and it tastes like you’re eating bathroom freshener. BlueBox’s chai doughnut had deep, warm cinnamon flavor with an almost smoky foundation.

I also had the vanilla bean and dark chocolate doughnuts, which were all well-flavored. The bacon, green chile and corn brioche bun I had was fantastic. It was moist, didn’t fall apart like some B.S. muffin and had a great balance of salty, sweet and savory, with multiple textures and temperatures. I’d go back for this.

As far as flavors, which I think is what BlueBox does best, the lemon poppyseed doughnut was the most vibrant. The lemon was cultivated straight from the fruit, it tasted like, and the poppyseed served as a subtle dryness and a stabilizing base. The glaze flaked and collided, forming little tessellated peaks of sweetness like ice shards on a lake’s shore.

In fact, for better or worse, I appreciated the aesthetic of BlueBox more than I did the doughnuts themselves after a while. They are very sweet. And, for me, more than 1.5 would be a headache. But as a boutique, specialty doughnut shop, one filling a vital niche in Boulder County’s food scene, BlueBox can afford to sell out on the singular doughnut. It’s in a different class than the two-dozen-for-the-office shops whose flavors and characteristics are subdued. So the next time I go, I’ll get one for breakfast, and save another for dessert.