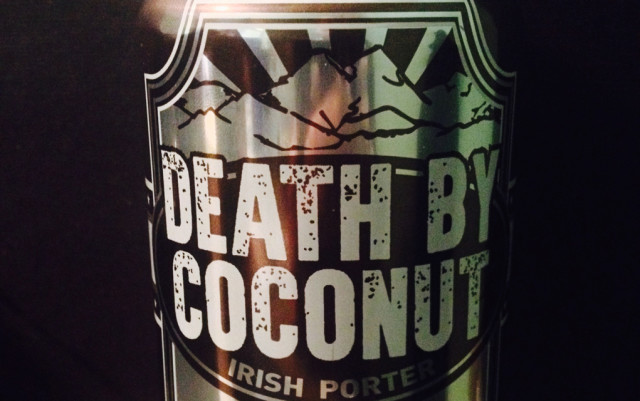 We’re in the heart of dark beer season. Every so often, it’s pleasant to come across a beer that both honors the season with its color and consistency, while also hinting at brighter things to come.

That dynamic is evident in the Death by Coconut Irish porter from Oskar Blues. It’s made a few rounds in years past, but this year’s batch is spot-on and ideal for those, like me, starting to look around for dark beer flavor variety.

Death by Coconut is a 6.5 percent ABV and slightly sweet porter that is brewed with Cholaca. You may have seen Cholaca in your local coffee shop — the team over there is really making the rounds — and it’s caught on because it’s an incredible foodstuff. Cholaca is basically liquid chocolate that’s made up from fair-trade cacao (sourced from farms in Ecuador and Peru), water and coconut sugar. Baristas use it in coffee drinks, chefs use it in savory and sweet dishes, and breweries are now using it in their beers.

What’s also a nice change from some other beers of the season is that the Death by Coconut is a porter, and not a stout. Though brewed with similar ingredients and in a similar manner, porter is generally lighter than stout, and the Death by Coconut benefits from that reduced consistency burden.

The beer won the Great American Beer Festival Silver Medal in 2014 in the chocolate beer category, and after being sold in 19.2-ounce cans in years prior, the brew is now available in liquor stores throughout Colorado in 12-ounce varieties. This year’s batch, in particular, has been noted for its exceptional quality. Thus, I was excited to give the beer a shot when I came across it in a Boulder beer store.

The first thing I noticed when I cracked open the can was the aroma. The scent was abundantly toasted coconut, or like smelling a hot coconut husk that’s been punctured and so some sappy coconut syrup has seeped out and congealed.

I poured some into a glass to let the aroma open up a bit. In the meantime, the light caramel-colored head settled, and the body of the beer had a beautiful dark glossy black, almost deep cherry red, almost burnt crème brûlée color. After the oxygen got into the beer, the aroma became very strongly that of sweet, fresh coconut flesh. I tried to pick out some chocolate in the aroma, but I don’t have a great nose for that anyway.

But the first taste reveals that deep, dark chocolate flavor. It’s almost as if you’re letting a dark chocolate square dissolve on the tongue when you sip the Death by Coconut. The coconut works in two part: the lighter bits pop off the tongue with the carbonation, while a deeper coconut flavor interacts with the dark chocolate to create a flavor like butterscotch. It’s all only very slightly bitter, and it’s got a creamy mouthfeel.

As the drinking process continues, the sweetness takes over a little bit. For me, it’s a sipper and so the sweetness is subdued, and my palate is satisfied with the interesting flavor alchemy. For others, it might be a bit too close to drinking carbonated syrup for their liking. All in all, it’s a unique beer that resoundingly achieves what it sets out to do, and it’s worth a try.