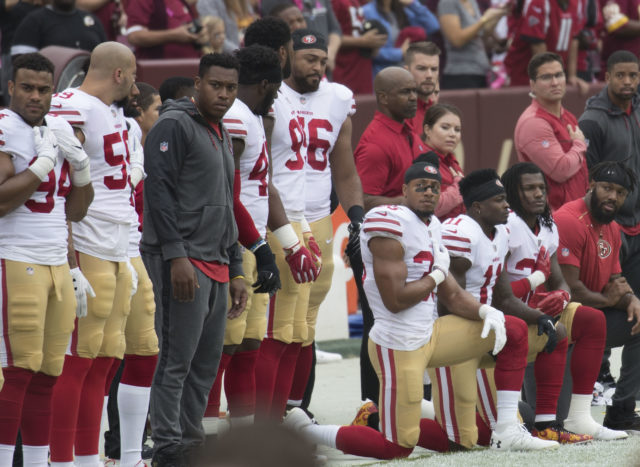 I’m a veteran of the U.S. Army. So it may come as a surprise that the day I read about NFL players kneeling during the national anthem, I could not have been prouder. I was proud because after serving my country for seven years, it felt like someone was finally looking out for me.

As someone who served as a sergeant in Afghanistan, only to take a civilian job helping veterans upon returning home, I fully understand patriotism. I work hard to embody it every day. That’s precisely why I think it’s so important to stop mischaracterizing Colin Kaepernick’s movement as unpatriotic. Players are not kneeling to protest the national anthem, as they’ve explained time and time again. They are kneeling to say that the ways in which police officers and the criminal justice system treat African-Americans — people like me and my family — constitute a national crisis.

I’m grateful for the players’ decision to take a knee. Because when many people set eyes on me, the first thing they see isn’t someone who may have missed his sister’s wedding, lost his father and buried several friends during his tour of duty. They don’t see a former combat medic who’d risked his life for their country or a man whose seven years of honorable service didn’t include a moment to grieve. Instead of a veteran, they see a black man first and foremost. And in 2014, police saw a potential criminal.

The awakening came only a few years after leaving the Army and returning home to my beloved New York. I’d enrolled in college, one of the major steps for reintegrating back into society after service. My new dream was to work on local policy.

I commuted daily from the Bronx to Manhattan to attend my classes at City College of New York. One night, during the two-block stroll from the subway to my apartment, New York Police Department officers stopped me in my path. I fit the description of someone who’d just committed a crime, they said.

“What was the crime?” I asked. They said they couldn’t tell me. When I asked if the description was for someone who looked like me — someone wearing a shirt and tie — they said I would have to call the station to find out. I was then put against a wall and searched. I felt humiliated and helpless.

It was only when they asked for my ID that they saw my veteran status at the top of it. Finally, the degrading and unwarranted search came to an end. They told me to have a nice day.

A part of me wanted to dismiss what had just happened to me as an isolated incident. But I knew that this practice disproportionally occurred in poorer neighborhoods and overwhelmingly targeted young black men.
A report by the New York Civil Liberties Union showed that innocent New Yorkers were subjected to stop-and-frisk tactics more than 5 million times since 2002, with people of color comprising the vast majority. These racially discriminatory NYPD stops were ruled unconstitutional in 2013, but this year officials revealed that black New Yorkers were still eight times more likely than white residents to be arrested for low-level marijuana charges, despite the groups using it at similar rates.

Tragically, racially biased policing isn’t contained to my hometown and leads to deadly consequences across America. Last year, a journalistic investigation found that black people were shot more often than white people by police, although black people were less likely to be found with a weapon.

When I left to join the military, it wasn’t for me — it was for my family and loved ones who I would leave behind. I felt like I was doing my part, so they wouldn’t have to live in fear of events like 9/11 happening again. But my service in Afghanistan hasn’t made my family safer from the people sworn to protect us in our own backyards.

So yes, I was proud of players like Colin Kaepernick, Eric Reid and Olivier Vernon because I knew how few people would be willing to risk their careers to shed light on issues that are urgent for people of color but that others often sweep under the rug. I’m proud that when Americans tune in to be entertained, the players in turn make the world more cognizant of the need to change how law enforcement operates.

The players are not disrespecting veterans by kneeling. My local Veterans Affairs hospital in Brooklyn has slowly shut down parts of the facility and forced veterans to seek care elsewhere. This truly is disrespectful and not the promise that this nation made to its service members. Disrespect is the struggle that veteran charities face when trying to raise money. If you feel that forcing America to grapple with its continued systematic oppression of racial minorities is disrespectful, take a deeper look at why it bothers you.

I pray that one day my fellow countrymen will see me for who I am: a veteran and a black man who wants to be treated the same as everyone else — whether I’m in uniform or not. I fought for our nation abroad, and now the players fight for my inclusion at home.