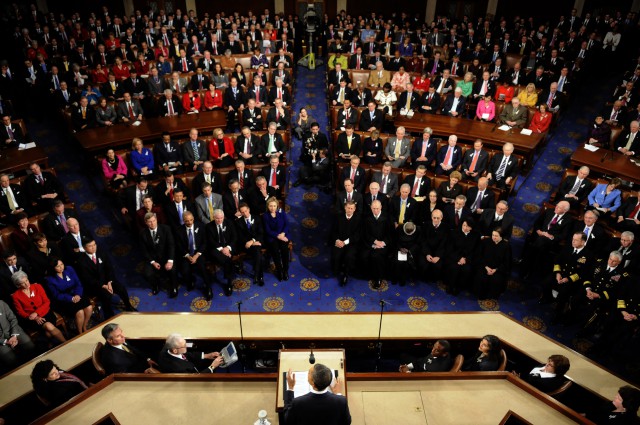 I have a modest proposal for increasing the security for U.S. Congressmen without isolating them from their constituents anymore than they already are.

OK, it’s a bit non-intuitive. First of all, forget about 24-hour security details, Kevlar body armor or even teaching Congressmen defensive shooting skills. They’re not cost-effective, and they serve to sow the seeds of distrust between the member and his or her constituents.

The way you increase the security of Congress members is to reduce their attractiveness as targets — both to militants and to wackos. And the way you do that is by increasing their numbers.

Currently there are 435 members of the U.S. House of Representatives. Based on the 2010 census, that works out to one Congressman for every 709,760 Americans.

Why 435 members? Because in 1929 Congress passed a law permanently fixing the membership of the House of Representatives at 435. (Actually, the House has had 435 members since 1911, when the population of the U.S. was less than a third of what it is now.)

As the number of constituents of each congressman has grown, so have the responsibilities, influence and celebrity of individual members. Congressmen are big shots, and each passing year makes them bigger shots.

And bigger targets. So taking a shot at a U.S.

Congressman is a big deal. News networks tear up their regular programming and go into crisis mode, which of course only encourages terrorist and political exhibitionist wannabes.

If you were in Congress, and someone took a shot at a Congressman, the odds of your number coming up would be 6,176 to 1 instead of 435 to 1. It works for ducks, wildebeests and prairie dogs — there’s safety in numbers.

Beyond that, being a member of Congress wouldn’t be nearly as big a deal as it is today, and neither would taking a shot at one.

Chances are the press wouldn’t make nearly as much out of shooting a congressman as they do now, and a lot of would-be assassins wouldn’t consider shooting a Congressman worth their time, if it occurred to them at all.

Hey, there are probably about 20,000 county commissioners in the country and you hardly ever hear of anyone taking a shot at them. And even when someone does, it’s usually to settle a grievance, not to make a political statement. Chances are if you tried to make a political statement by shooting a county commissioner, people would just laugh at you. Trust me on this.

But wouldn’t a 6,176-member Congress be unworkable?

Actually,
it might even be more efficient than the present Congress, because
members would have to do much more of their business with computers. You
could probably have a much better discussion of a complicated bill in a
moderated blog than you ever could on the House floor.

As
for debates, most Congressional debates today are managed affairs, in
which managers for each party line up a limited number of members to
speak on a bill and then allocate each of them a limited amount of time
in which to speak. Even on important bills, most members don’t speak on
the floor. That sort of debate can take place as easily in a
6,176-member body as it can in a 435-member one.

But
wouldn’t we need to build a new House chamber to seat 6,150 members? I
suppose. It wouldn’t have to be much bigger than CU’s Coors
Events/Conference Center or any of a number of museums on the Mall.

Alternatively,
House meetings could take place outdoors on the Mall west of the
Capitol, with members standing throughout sessions, as the citizens of
the Swiss canton of Appenzeller do during their cantonal meetings. That
would keep them focused on the business at hand. Especially in the
winter. And the summer.

Or
better yet, the House could meet in the Washington Nationals arena when
the team is on the road. Congress only works four days a week as is, so
there shouldn’t be much of a scheduling problem.