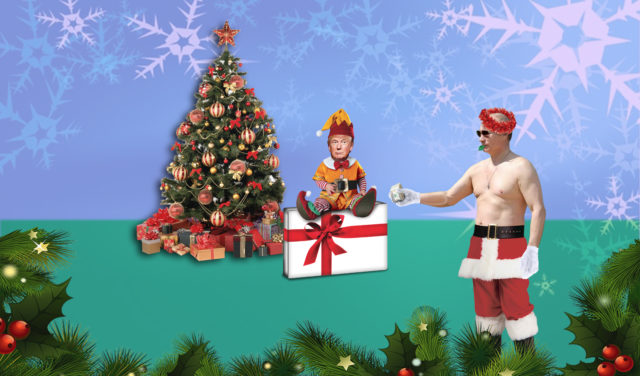 ‘Twas the night before Christmas, when all through the house

The fishnet stockings were hung with care,

In hopes that St. Vladimir soon would be there;

The children were nestled all snug in their beds;

While visions of profit danced in their heads;

A mamma in her ’kerchief, danced in Trump’s lap,

A reminder to our brains of the coming years of crap,

When out on the lawn there arose such a clatter,

Donald sprang from his bed to see whom his guards batter.

On the way to the window his thinking so rash,

He tore open the shutters to look down on us trash.

The moon on the breast of the new-fallen snow,

Lit up the whole scene like a nuclear glow,

When what to his squinting eyes did appear,

But a million Americans with eyes full of fear,

They chanted and sang so lively and quick,

They dreamed of the day they’d throw out the orange prick.

But more rapid than eagles his appointees they came,

And he whistled, and shouted, and called them by name:

On, Mattis ! On, Puzder! On, Tillerson and Exxon!

The higher they climb, the further they’ll fall,

As leaves that before the wild hurricane fly,

When they meet with an obstacle, they know how to lie;

So into the war room the coursers they flew

All of the white guys, and the orange guy too —

And then, in a twinkling, they whispered the truth

That the whole darned election had been Vladimir’s spoof.

As Trump smiled at the mirror, he heard a loud sound,

Down the chimney came Vladi in a spectacular bound.

He was only half dressed, from his head to his foot,

The bundle of money he had flung on his back,

Made him look like a mobster as he opened his pack.

His eyes — how they twinkled! his dimples, how merry!

The wreath on his head made him look ever so scary!

His droll little mouth was drawn up like a bow,

As he told the orange one, “This is my show;”

Trump wanted to know why he was beneath,

A shirtless Russian whose head wore a wreath;

That shook when he laughed, like a bowl full of jelly.

Made him chubby and plump, like a jolly orange elf,

Not worthy of ruling like his impressive pecked self;

With a wink of his eye and a twist of his head,

Vladi said, “Do what I say or find yourself dead;”

Trump spoke not a word, but went straight to his work,

Grabbing women and tweeting, oh my what a jerk,

Then laying his finger aside of his nose,

Vladi nodded as up the chimney he rose;

On the roof he directed Trump’s team with a whistle,

Start drilling and fracking if you must use your pistol.

Then I heard him exclaim, ere he drove out of sight —

“Happy Christmas to all, and to Planet Earth good night!”