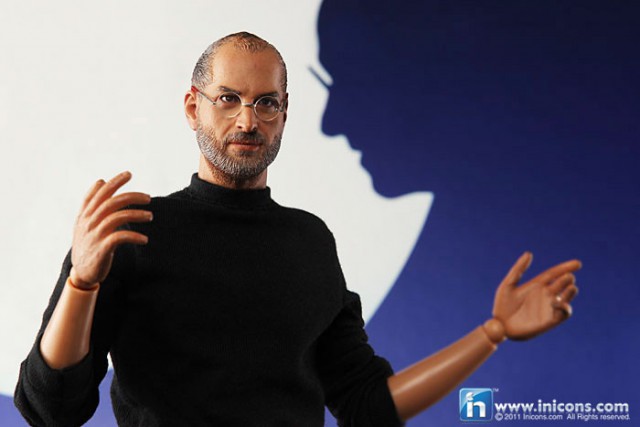 LOS ANGELES — An eerily lifelike Steve Jobs doll will
not be sold because the company behind the product received “immense
pressure” from Apple’s lawyers and the late CEO’s family to not sell the
figurine.

“We understand that this decision will cause many of
the fans disappointment, but please forgive us as there is no other
alternative unless to have the blessing from Steve Jobs family,” In
Icons said in a rambling statement on its website, which features quotes
from Jobs and numerous images of the doll prototype. “We will aim to
have full refund to the fans who have pre-ordered.”

In Icons had been taking pre-orders of the 12-inch
doll, which cost $100 and came with “one realistic head sculpt and two
pairs of glasses,” “one highly articulate body and three pairs of
hands,” one black turtleneck, one pair of blue jeans and two apples —
one with a bite taken out of it.

The company had planned to start shipping the dolls in February and said on its website that it was running out of stock.

In the statement announcing the company’s decision to
not offer the doll, In Icons said the figurine was adjusted “countless
times” to achieve the Apple visionary’s likeness. The company said
making the doll was a tribute to Jobs.

“Regardless of the pressure, I am still Steve’s fan, I
fully respect Steve and his family, and it is definitely not my wish or
intention that they be upset,” said the statement, which was signed
“inicons.com.” “Though we still believe that we have not overstepped any
legal boundaries, we have decided to completely stop the offer,
production and sale of the Steve Jobs figurine out of our heartfelt
sensitivity to the feelings of the Jobs family.”