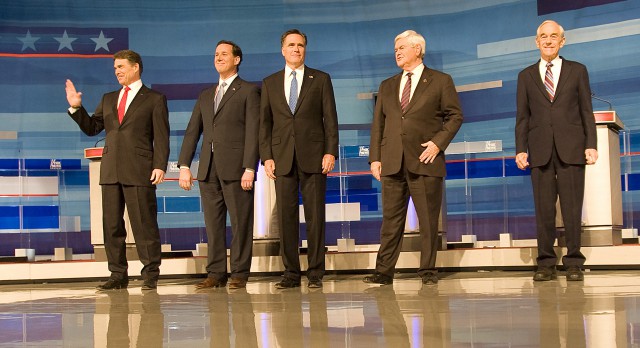 MYRTLE BEACH, S.C. — In one of the most sustained
batterings he has endured in the 2012 presidential primary debates, Mitt
Romney was repeatedly put on the defensive over his business and
government record and the attack ads by his supporters that are swamping
South Carolina’s airwaves.

The former Massachusetts governor’s rivals have been
increasingly desperate to derail his front-running candidacy as Romney
looks to put a virtual lock on the Republican nomination in Saturday’s
primary.

Rivals Rick Santorum and Newt Gingrich took aim at
Romney, landing blows that, despite hitting their mark, may have
canceled out either of their chances of emerging Monday night as
Romney’s key challenger.

Together the opponents sought to argue that Romney
lacked principles, was exercising an unfair advantage through a “super
PAC” created by his former aides, and was hiding his income taxes to
deflect criticism.

Santorum delivered one of the first blows, laying a
trap for Romney about voting rights for prisoners. A super PAC
supporting Romney has been running ads accusing Santorum of backing the
right of felons to vote from prison — a charge the former Pennsylvania
senator said was false.

Santorum defended his Senate vote, noting that Monday
was Martin Luther King Day, and that the measure he supported was aimed
at restoring voting rights for criminals who had served their time and
finished their probation and parole requirements, a population that
disproportionately includes blacks. He pressed Romney about whether he
supported such a measure.

Romney said he did not believe that people who have
committed violent crimes should ever be allowed to vote, leading
Santorum to parry that when Romney was governor, violent Massachusetts
felons could vote even while they were on probation and parole.

“If in (fact ) you felt so passionately about this
that you were now going to go out and have somebody criticize me for
restoring voting rights to people who have — who have exhausted their
sentence and served their time and paid their debt to society, then why
didn’t you try to change that when you were governor of Massachusetts?”
Santorum said.

Romney responded that his state’s legislature was 85
percent Democratic, and he went on to criticize the existence of super
PACs, despite the fact that he has benefited the most from their
existence this election cycle.

“We all would like to have super PACs disappear, to
tell you the truth,” he said later in the debate. “Wouldn’t it be nice
if people could give what they’d like to campaigns and campaigns could
run their own ads and take responsibility for them?”

Gingrich drew hoots of approval from the audience
when he said Romney’s inability to get his supporters’ super PAC to
remove an ad that distorts Gingrich’s position on abortion “makes you
wonder how much influence he’d have if he were president.”

Romney shot back that Gingrich’s supporters were
running an ad, replete with erroneous charges about his business record,
that is “probably the biggest hoax since Bigfoot.”

With his experience as co-founder of a private equity
company, Bain Capital, under attack, Romney said for the first time
that he’d “probably” release his tax returns later this year if it was
apparent he would be the nominee.

Gingrich defended his assaults on Romney’s business
record, which includes job losses at some companies Bain invested in,
and what Gingrich called a pattern of loading a “handful” of companies
with debt, after which they went broke.

To applause, the former House speaker said
questioning Romney’s record in private business “is exactly what
campaigns ought to be about. And we need to satisfy the country that
whoever we nominate has a record that can stand up to Barack Obama in a
very effective way.”

One of the debate panelists, Gerald Seib of The Wall
Street Journal, asked Romney about American Pad and Paper, a company
that went bankrupt, costing hundreds of people their jobs, while Bain
Capital took out $100 million in profits and fees.

Romney said the company was caught in a shrinking
industry and some of those who lost jobs were union workers who didn’t
want to transfer to a non-union plant. And he pushed back against the
notion that he practiced a particularly harsh brand of capitalism.

“If people want to have someone who understands how
the economy works, having worked in the real economy, that I’m the guy
that can best post up against Barack Obama,” Romney said to cheers from
supporters in the crowd at the Myrtle Beach Convention Center.

Short of money and time, Gingrich and Santorum are in
a struggle to become the social conservative alternative to Romney. So
far, none of the GOP contenders has been able to corral a clear majority
of the vote on Romney’s right, allowing the former Massachusetts
governor to pull away from a divided field.

Texas Gov. Rick Perry also hopes to compete in that
mini-contest, but he has struggled to excite Republican voters and is
facing a real threat of elimination after Saturday’s primary.
Demonstrating a comfort level as a debater that eluded him in early
forums, Perry repeatedly delivered crowd-pleasing lines, one coming when
he sharply criticized the Obama administration’s description of videos
of Marines allegedly urinating on Taliban corpses — which he said
demonstrated the president’s “disdain” for the United States.

When Defense Secretary Leon Panetta “calls that
‘utterly despicable’ — let me tell you what’s utterly despicable:
cutting Danny Pearl’s head off and showing the video of it,” said Perry,
referring to the 2002 killing of a Wall Street Journal reporter in
Pakistan. The newspaper was a co-sponsor of the debate along with Fox
News.

South Carolina’s primary electorate has a higher
proportion of military families and veterans than earlier states, and
Perry, an Air Force veteran, hopes to tap them. But the other veteran in
the race, Rep. Ron Paul, is at a disadvantage because of his dovish
views on the use of military force.

Paul continued to defend his isolationist foreign
policy beliefs, maintaining that the nation would be safer if it was
less militarily engaged.

“I would say that maybe we ought to consider a Golden
Rule in foreign policy. Don’t do to other nations what we don’t want to
(be done) to us,” he said, as the crowd booed. “So we endlessly bomb
these countries and then we wonder why they get upset with us?”

The Houston area congressman also argued that King
would agree with his opposition to wars, noting that he opposed the U.S.
action in Vietnam.

The debate featured a slimmed-down field of five
after Jon Huntsman Jr. pulled out of the race hours earlier. The former
Utah governor endorsed Romney and took a blast at the GOP campaign’s
“toxic” atmosphere — to which he contributed with his own attacks on
Romney.

Romney did not attend Huntsman’s event, held in the
same convention center where the debate took place. The endorsement is
likely to provide, at best, only a marginal boost to Romney’s campaign
in South Carolina, since Huntsman was drawing about 5 percent in recent
public polls.

Political veterans in the state warn that the race remains fluid.

The debate, the 16th of the Republican campaign,
kicked off what will likely be the last concentrated series of televised
faceoffs. Four debates are scheduled in a nine-day period between
Monday and Jan. 23 in South Carolina and Florida, the two states that
will hold primaries this month.