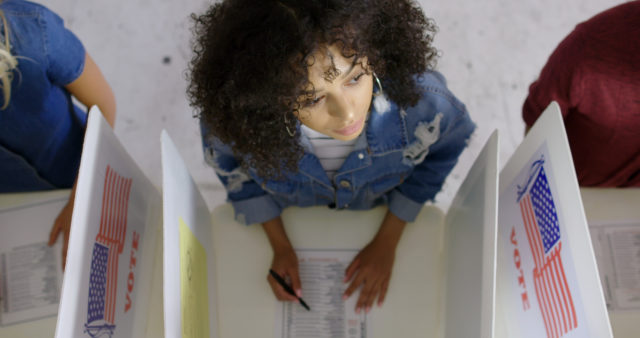 The passing of Supreme Court Justice and women’s equality champion Ruth Bader Ginsburg, in conjunction with National Voter Registration Day, brought a surge of voter registration and requests for mail ballots across the country — a 118% increase over the previous weekend according to the national nonpartisan technology platform vote.org.

But for survivors of domestic and sexual abuse, registering to vote can come with significant consequences: residential addresses become public record, making it easier for abusers to find them. Over the last decade, Colorado has worked to guarantee survivor confidentiality in the voting process.

“Everyone has the right to participate in our democracy,” Boulder County Clerk Molly Fitzpatrick says. “And we should be doing everything we can to ensure that reality can be achieved for people who have experienced domestic violence, for people who are survivors.”

Statewide survivor data is hard to quantify, says Lydia Waligorski, public policy director at Violence Free Colorado. But national statistics show that on average 1 in 3 women and 1 in 4 men across the country will experience rape, physical violence or stalking by an intimate partner; 29% of women across the country have reported such experiences, including the fact that it impacts their functioning in at least some way, according to the National Domestic Violence Hotline.

Those still living with abusers face barriers to voting, like isolation leading to a lack of access to election information, the ability to request absentee ballots or leave the house to vote in person, according to a 2018 Center for American Progress policy brief. There can also be pressure to vote for a particular candidate or in a certain way.

Many abusers will go to great lengths to find survivors after they’ve left. Although it can be difficult to determine how an abuser tracks down a survivor, Waligorski says she’s worked with several clients whose abuser found them using public voter registration information.

“What we know about abuse is that it’s all about power and control. And when an abuser loses that power and control of you, they will do pretty close to anything to get that feeling of control back,” adds Rebecca Zimmerman, domestic violence researcher at Denver University’s graduate school of social work, who also works with Violence Free Colorado.

In Colorado, finding a current address through the state’s voter registration website, govotecolorado.gov, only requires knowledge of a person’s full name, birth year and zip code. Fitzpatrick says what’s publicly available is determined by state statute, and includes a voter’s address, party affiliation, birth year and vote history. Data requests for voter information are also common, as campaigns ask for a variety of different lists of voters in their election efforts.

Addresses are required in the registration process to ensure people vote in the right district, but Colorado, among other states, offers a few programs for survivors of domestic violence, sexual abuse and even stalking, which makes up a large portion of the population seeking address confidentiality. (Anecdotally, Zimmerman says a friend of hers was recently stalked by someone who disagreed with her politics — the stalker found her home address through her voting records, sending her terrible mail.)

Colorado’s Address Confidentiality Program (ACP) was passed by the state legislature in 2007, following the state of Washington’s lead, which instituted the first such program in the nation in 1991.

“Once in a while we do hear from survivors that this program has saved their life,” says Program Director Jackie Cash, although she’s hesitant to share specific examples in order to protect any identifying information.

Working with the U.S. Postal Service, ACP creats ghost addresses for survivors, all of which have the same address in Centennial but with different apartment numbers. Staff at ACP then bundles mail and sends it to the survivor’s physical address or post office box.

“All state and local government agencies must accept the ACP address as the person’s legal address,” Cash says. “The idea is that the ACP is the only repository of survivor information.”

The program is beneficial beyond voter registration as well: survivors can use ACP to enroll children in schools, on their driver’s licenses, even in court. Enrolling in the program really only works if a survivor has just moved or is planning to move, so that all records already out in the community would need to be updated.

ACP sees new participants enroll every month, Cash says. Some 8,000-9,000 people have passed through the program, since it began in 2008, with 4,000 people currently enrolled. While some people are only in the program for a few months, about 25% of survivors have reenrolled after the initial enrollment period of four years. Survivors can leave the program whenever they want and on their own terms.

Currently, 36 states around the country have such programs and survivor protection laws, and the number keeps growing, Cash says.

“The more difficult it is for people to vote, it just magnifies that experience for domestic violence survivors,” Anne Tapp, executive director of Safehouse Progressive Alliance for Nonviolence (SPAN) Boulder, says. “I think states that are really committed to reducing barriers to voting are ones that have taken into account the additional concerns domestic violence survivors have about participating in the process safely.”

Most of SPAN’s staff are trained ACP liaisons who can help survivors enroll in the program.

“We’re interested in ensuring that survivors aren’t disenfranchised from that very important ability to vote and have their voices heard,” Tapp says, but, “if you’re in the middle of a crisis and trying to simply survive and stay alive, voting is sometimes not a priority.”

County clerks around Colorado also have confidential voter programs, which keeps identifying information off of public voter lists. Survivors can sign up directly through county clerk offices by filling out paperwork, providing identification and paying a $5 fee.

Through this program, the voter still gets their ballot mailed to their actual address, but that information doesn’t appear on public records requests and isn’t available at the statewide voter registration website. As such, the voter will not be eligible for the statewide ballot tracking program, and they will have to fill out paperwork in a county clerk’s office to change or update their registration, Fitzpatrick says. Boulder County currently has approximately 575 confidential voters.

Not all survivors are stalked by their abusers, however, and many share children or rely on protection orders and arrests to keep their abusers away, Waligorski says. But even if these confidentiality programs aren’t necessary, Violence Free Colorado works to educate survivors about the importance of voting.

“The way our society is governed and what the rules are, have a daily effect on if survivors get justice, if survivors are protected, if survivors are able to regain their voice and their life,” Zimmerman says. “Survivors have the power to become a really effective voting block… And I hope that as people begin speaking out more about their experience of surviving violence that will materialize: survivors as an empowered group making change.”