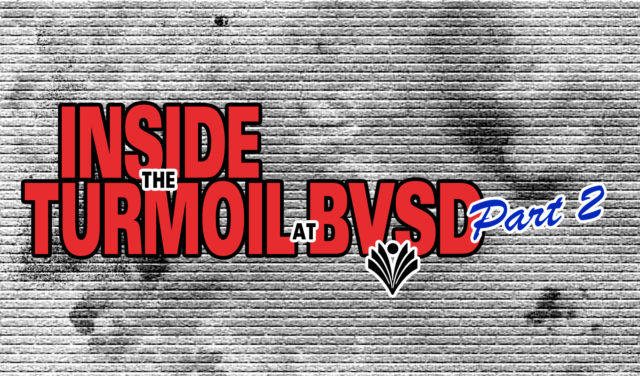 As previously reported by Boulder Weekly, Boulder Valley School District Board of Education terminated superintendent Dr. Bruce Messinger’s contract in May following an investigation into a complaint filed by Assistant Superintendent of Strategic Services Leslie Arnold. In March, Arnold filed the complaint alleging she was on the receiving end of what she believed was inappropriate behavior by Messinger. She also alleged that after she had expressed her concerns to both the Assistant Superintendent of Human Resources, Shelly Landgraf, and to an outside evaluator Abby Curnow-Chavez, Arnold believed Messinger retaliated against her, culminating in what she felt was a demotion in February.

After Arnold filed her complaint, the Board of Education (BOE) placed Messinger on paid administrative leave and launched an investigation using outside counsel Berg, Hill, Greenleaf and Bruscetti and an independent investigator, Kathryn Miller. Following Miller’s investigation into Arnold’s allegations, the board voted 7-0 to unilaterally terminate Messinger’s contract without cause on May 9, agreeing to pay him the remainder of his contract at a price tag of $120,000. Landgraf resigned three weeks later. In July, Arnold settled with the District to the tune of approximately $230,000 (one year’s salary while she’s on paid administrative leave, with an additional $100,000). The settlement includes a clause preventing Arnold from reaching out or responding to any media outlets regarding her claims.

On Oct. 11, Boulder Weekly received an envelope in the mail containing multiple documents associated with the investigation, including the 2017 investigative report by Miller. There was no return address on the envelope but a short note of introduction was signed “a collection of concerned BVSD employees.”

These documents confirm Boulder Weekly’s earlier reporting, and also reveal that BVSD outside counsel from Caplan & Earnest and Board President Sam Fuqua knew about Arnold’s concerns with Messinger’s behavior towards her as early as June 2016 following a 360 evaluation for Messinger conducted by Curnow-Chavez approximately eight months before Arnold filed her official complaint with the BOE. The documents also confirm that some members of the BOE — those who were in place in 2015 — knew about previous allegations against Messinger. The 2015 complaints were brought forward by two members of the BOE who claimed they were made to them verbally by a high-ranking BVSD employee who had recently left District. For reasons explained below, these claims were never investigated based on advice from legal counsel.

In the summer of 2015, board members Tom Miers and Shelly Benford claim they were told by a former BVSD senior-level administrator about alleged difficulties in the workplace that carried over to evenings and weekends. Though she no longer worked for BVSD at the time, the former employee was told by one of the board members in writing that they intended to pursue an investigation into the allegations. The former employee made the decision not to be involved in any way in an investigation. She made this decision clear to Miers and Benford as well as BOE outside counsel Richard Bump of Caplan & Earnest. She responded in an email that she was “dismayed” by the decision to move forward and stated she had made it “very clear that I have not initiated a complaint against BVSD or the Superintendent and have no desire to do so at this time.” The board members, however, believed what they had been told qualified as a valid verbal complaint according to board policy AC-R, which states “whether or not the individual files a written complaint or otherwise requests action, the district is required by law to take steps to correct unlawful discrimination or harassment and to prevent recurring unlawful discrimination, harassment or retaliation.”

Both Miers and Benford recorded their notes from their conversations with the former employee and sent it to Bump despite requests  not to pursue the issue by the alleged complainant. Boulder Weekly has reviewed the four-page list of alleged complaints. We’re not reprinting the allegations because they have never been investigated or litigated. We can confirm they were serious, and when presented to a local law enforcement investigator as a hypothetical scenario with no names attached, we were told that such allegations would normally warrant further investigation.

Following an executive session called to discuss the 2015 allegations — this executive session was mentioned in the 2017 investigator’s report — it appears the decision was made not to pursue a formal investigation, which would have included interviewing witnesses who worked around Messinger and the former senior-level administrator.

“We did receive allegations in 2015,” current BOE President Fuqua says. “I think the board acted appropriately based on the information we had at the time with advice from counsel.”

When asked, Miers would not comment on his conversations with the previous employee or the specific alleged complaints, although he did acknowledge he received what he believed to be serious allegations that should have been investigated further.

“I did receive a verbal complaint on multiple occasions in the summer of 2015,” Miers tells BW. “In June, a short telephone call; then in the end of July a telephone call; and then an extended hour and 46 minute telephone call on Sept. 2 followed with an in-person meeting on Sept. 6. According to our policies and also the training that I’ve had in my job on workplace harassment, I felt they were valid complaints. Our policies say that a verbal complaint is a complaint and our policies say we should follow up on those complaints regardless of whether the claimant wants to pursue it or not. I subsequently recorded all my notes, met with both our inside and outside legal counsel on two separate occasions and presented what I felt was a complaint that should have been followed up on.”

Benford also would not comment further on the specific complaints from 2015. She did say, however, “I received the complaint, I reported the complaint and nothing was done.”

Messinger also confirmed in a conversation with BW that these two Board members brought forward allegations in 2015, which he discussed with the BOE. “Concerns were brought forward by two members of the board, not by an employee,” Messinger says. “It was never verified the employee ever expressed concerns or complaints. Certainly there was nothing ever recorded in the Human Resources office or the attorney’s office that came from any employee or former employee.”

He also says he discussed the allegations with the Board in an executive session, where he says “the majority of the board felt they were unfounded.”

Then in the spring of 2016, BOE hired an independent evaluator, Curnow-Chavez, to conduct a 360 evaluation before extending the superintendent’s contract through June 2019. As previously reported by BW, during the course of this evaluation, Arnold shared her concerns regarding Messinger with Curnow-Chavez.

As part of her 2017 investigation, Miller spoke with more than a dozen BVSD employees and former employees, as well as Curnow-Chavez. The Board waived a nondisclosure agreement Curnow-Chavez signed with the District in August 2016, wherein she agreed “to keep confidential her writings, notes and the like generated from the work.” This allowed Curnow-Chavez to talk to Miller, according to the 2017 investigator’s report. In the report, Curnow-Chavez confirmed Arnold told her about her concerns with Messinger’s behavior during their interview on May 18, 2016. According to the report, Arnold “expressed feeling discomfort at his ‘intense’ interest in her, his requirement that she attend every meeting with him, and carpool with him to meetings with no one else.” Arnold also “expressed fear of losing her job if she complained.”

According to the investigative report, “Messinger denies giving unusual attention to Arnold” and “He asserts that Arnold was not treated differently than others.” Additionally, in conversations with Boulder Weekly, Messinger says he was never made aware of these allegations in 2016.

Also, when Curnow-Chavez interviewed board members Benford and Miers for the evaluation, they told her about the 2015 allegations, according to Miller’s 2017 investigative report.

“Hearing about these issues from multiple individuals, Curnow-Chavez became alarmed at what could be considered to be a pattern of inappropriate behavior. She states her ‘HR bells were going off’ and she consulted her own counsel to determine what she should do with this information,” the investigative report states.

In the end, Curnow-Chavez did not include “the details regarding these allegations of inappropriate conduct” in the evaluation summary she gave to Messinger, according to the investigative report. Rather, “she decided to discuss with him verbally.”

“There was no concern brought forward in my evaluation,” Messinger tells BW. “I will tell you that Abbey (Curnow-Chavez) did not bring anything forward to me from any member from Cabinet or the administrative team or any employee or previous employee.”

He does acknowledge he knew Miers and Benford had brought up the 2015 allegations, but there were no “new allegations, simply those were brought forward again and put to bed again,” he says.

The report says, and Messinger confirms, that he believed “such disclosure” by the two board members “breached the agreement he had with the BOE that these concerns would remain confidential.” Additionally, he discussed this with Fuqua and attorneys from Caplan & Earnest. The report states, “During this meeting, he (Messinger) states he was told to be very careful in his interactions with all Cabinet members. Arnold was not specifically named. Among other things, they advised him to stop carpooling with Cabinet members.”

As part of Miller’s investigation, Curnow-Chavez says she did not include any allegations in her final evaluation. She did, however, tell Board President Sam Fuqua and lawyers from Caplan & Earnest about her concerns regarding Messinger’s behavior. As the investigative report states, “She told [Fuqua] she was going to capture it in writing. He indicated a preference to have a verbal discussion with lawyers at Caplan & Earnest.” At the meeting on June 22, 2016, almost a year before Messinger was formally investigated, Curnow-Chavez “told them she had essentially received a complaint from one staff member and she was concerned it may be similar to what they had previously received from [the former high-ranking administrator]. She wanted them to know in her opinion they had risk.”

Approximately two months after this conversation, she signed a nondisclosure agreement on Aug. 17, according to the investigative report. Fuqua declined to comment on anything regarding the 2017 investigation. Caplan & Earnest and Curnow-Chavez did not respond to requests for comment before press time.

Although several members of the BOE are directly named in the report, they were not interviewed as part of the investigation, given that the BOE “is the final decision-making body in this matter” and “members of the BOE cannot also be witnesses,” the report states.

From both the investigator’s report and Boulder Weekly’s conversations with the rest of the board, it appears neither Fuqua nor anyone from Caplan & Earnest notified the other six board members of Curnow-Chavez’s concerns about what Arnold shared with her in 2016. The BOE approved the superintendent’s evaluation, which did not mention any allegations or complaints, in September 2016. The BOE extended Messinger’s contract in October that year, with Miers, Benford and Richard Garcia voting against it.

However, it was after Arnold shared her concerns with Curnow-Chavez in 2016 that she alleges Messinger began retaliating against her, as reported in the previous BW article and conveyed in the 2017 investigative report. Arnold brought her complaint directly to the BOE, bypassing both the HR department and Messinger. Miller’s investigative report concluded Arnold’s allegations were “substantially supported by the evidence.”

In light of these new documents that have come forward, Boulder Weekly plans  additional reporting on other aspects of this subject in the future.