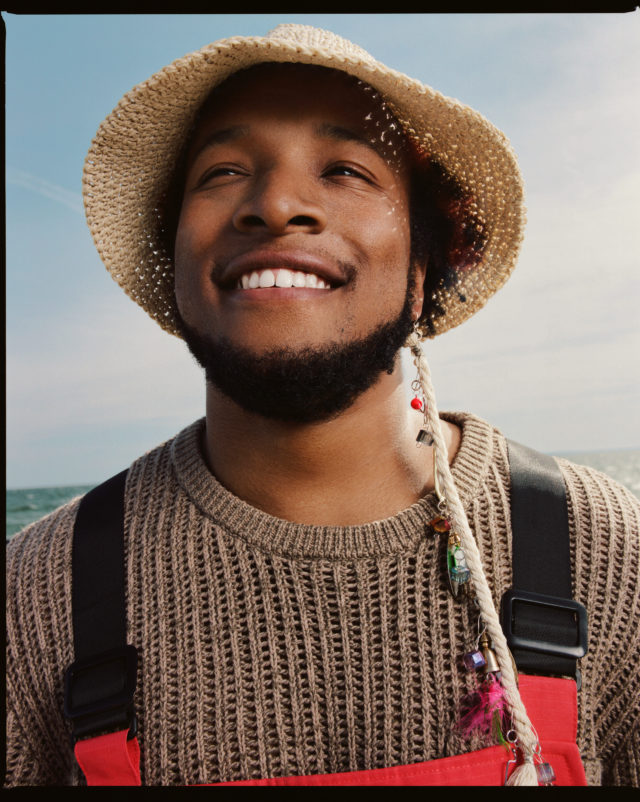 Cautious Clay, stage name for multi-instrumentalist and singer Joseph Karpeh, captures the tension of life—his music is laid back yet complex, the lyrics somewhat theoretical yet deeply personal, overall hopeful yet realistic about the world we live in. Karpeh released his debut album Deadpan Love in 2021 to high acclaim, following up with a deluxe version earlier this year. The album, in a lot of ways, lays out Karpeh’s personal philosophy, the way he both sees and interacts with the world around him.

With his latest single “Puffer,” released mid-June, Karpeh is returning to the EP format of his earliest work (Blood Type, 2017, Resonance, 2018, and Table of Context, 2019), and planning to release the untitled collection of tracks in September. The format is currently appealing, Karpeh says, and the tracks he’s working on conceptually reflect this moment in time. The new EP is “less moody” and “a little bit quicker” and perhaps a little less dense than his LP, but it still has a level of emotional intensity to it. Something fans have grown accustomed to in Karpeh’s work, and something the singer says, “I think it’s always gonna be an element of my music … I think it’s still dealing with a lot of palpable ideas in terms of the world and relationships.”

A play on words stemming from Muhammad Ali’s given name of Cassius Clay, Karpeh chose his stage name back when he was DJing and producing, and the name just sort of stuck. He doesn’t see it as much as an alter-ego, but a way of incorporating vulnerability into his interaction with his audience, while staying true to himself. There’s a certain independence to his creativity, a way of documenting his perspective at different time periods in his life while trusting his intuition to guide him along the way.

Raised in Cleveland, Karpeh grew up around music, both parents employing tastes that introduced him to a variety of music most of his peers weren’t privy to. He was also fortunate to have inspiring teachers who helped shape his musical prowess. He began playing the flute at age 7, after falling in love with the instrument while watching a snake charmer play one in the cartoon Aladdin.

His first teacher was Greg Patillo, one of the major proponents of the beatbox flute method, when the flutist was a student at the Cleveland Institute of Music. With flute beatboxing, the woodwind instrument becomes rhythmic, as the player hums and blows into the flute at the same time, adding the vocal percussion typical of beatboxing along with quick finger movements.

“I think seeing him do that was super inspiring for me,” Karpeh says. “I could just make beats and play the flute.”

The bond Karpeh formed with Patillo was formative—the persistence, encouragement and talent allowed Karpeh to pave his own way with his music, transitioning into the saxophone, guitar, base, keys, drums, and eventually vocals.

“I just never thought there were any limitations,” he says. “I think that was the biggest impression that [Patillo] made on me—just the fact that the world really is your oyster and it doesn’t have to be this particular genre or particular thing. Do what feels like works for you … I think that was always really a big part of why I kept putting music out and I kept trying to not fit into one particular sound.”

Now, Patillo and Karpeh are both based in Brooklyn, and the two recently reconnected, swapping flute techniques and production methods. Brooklyn is also where 29-year-old Karpeh has lived for the last six years, occupying a mansion with anywhere from nine to 15 roommates at any given time. He actively chooses the communal life over a solitary one, even as his musical career has taken off.

Communal living never feels like a chore or gets uncomfortable. He says it’s taught him not to take things personally, to roll with the punches while also being direct and communicative about how each person affects the rest.

“It makes me a better writer, a much better person, and I think it’s helped me connect to my audience even deeper,” he says. “And it’s allowed me to just tap into a different way of thinking.”

Karpeh attaches meaning to the way the music makes him feel, as opposed to the particular sound it may have, which makes his artistry difficult to qualify. Part R&B, part soul, part indie rock and everything in between, Karpeh has writing credits with artists as varied as Taylor Swift to John Legend, in addition to his own body of work. Throughout it all, he has evolved as an artist both in terms of belief in his work and in himself, finding a sense of belonging in the creativity itself rather than any one genre.

“I’ve never really felt like I’ve had to find an aesthetic for myself that fits me into a certain category of artists,” he says. “I’ve just sort of been myself this whole time.”