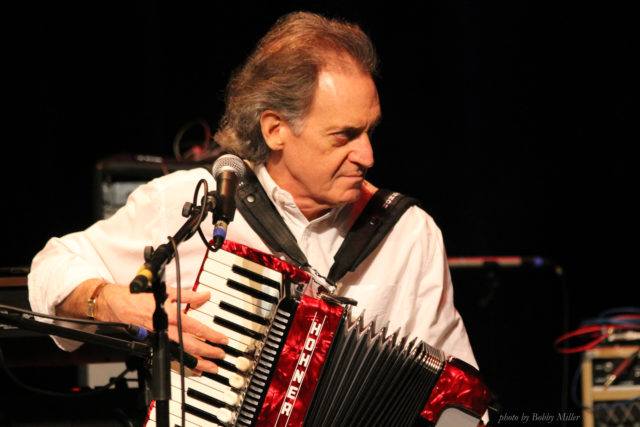 Steve Conn is one of those serial Boulderites. The legendary musician has moved to town, left Boulder, regretted it and then returned … repeatedly.

“I love Boulder … at least the Boulder I remember,” Steve Conn says. He calls on Zoom from his home outside Nashville and punctuates his recollections with riffs on his ever-present piano.

Fifty years after he first visited and played in Colorado, Steve Conn will perform Saturday, Aug. 27 at Nissi’s in Lafayette one more time. Following a set of his original songs, Conn will lead a reunion of Gris Gris, the great Boulder-meets-New Orleans funk band. Community elders are eager to hear the Louisiana-born artist again. Everyone else is asking:

Meet the most diversely talented musician Boulder has ever helped to launch that almost nobody knows today.

A major player in local bands in the 1980s, Steve Conn was the founding musical director when Boulder’s eTown debuted in the 1990s. He has hit the road backing everyone from Albert King and Kris Kristofferson to Sheena Easton and Bonnie Raitt.

You can hear his keyboards, accordion and vocals on 10 Grammy-nominated albums and on recent recordings by Shemekia Copeland, Jake Shimabukuro and Vince Herman (of Leftover Salmon).

For decades, as Conn notes, a Louisiana-Colorado music connection has thrived, with musicians ranging from late pianist Henry Butler to Cajun fiddle star Doug Kershaw calling the state home. Conn first visited Colorado in 1972 backing another legendary fiddler, Michael Doucet (of the band BeauSoleil), who owned a house in Allenspark.

Conn was smitten with the state immediately. “I wanted to come back to Colorado as soon as I could. I returned in 1975 determined to stay this time,” he says.

“We hit it off immediately and put a band together called Juke. We played bars in Colorado for six months. It was one of the best things that ever happened to me,” Conn says. Landreth has remained one of Conn’s best friends and favorite collaborators.

Fast forward to 1980, and Steve Conn was in Boulder again. “I was only back a week when I stopped by the Mezzanine in the Hotel Boulderado during happy hour. There was a guy playing the piano, but I thought I could do better. After I auditioned for the manager the next day, I was hired on the spot,” he says. Conn replaced Peter Kater, the double Grammy winning local pianist who’s successful career also started here.

“I’m not a very nostalgic person but it was an amazing time in my life. I’d play at the Mezz for three hours, five days a week,” he says. Conn’s knowledge of popular standards was nurtured by his dad, a swing era bandleader.

Boulder was jammed with live music venues in the early 1980s. “We would go from Jose Muldoon’s to JJ McCabe’s to the Blue Note and Mollie’s Back Room and even Peggy’s HiLo to hear all these different kinds of bands,” Conn says.

The Birth of Gris Gris

One kind of music seldom heard in Boulder back then was New Orleans’-born rhythm, blues and jazz. When the Hotel Boulderado manager asked Conn if he could put together a band for its Mardi Gras party, it only took a few days.

Gris Gris was a funkified mind-blower to folks dwelling in the then-mellow land of “Rocky Mountain High” playing rollicking tunes by Dr. John and The Meters and classics like “Iko Iko” and “Big Chief.”

After Gris Gris ran out of steam, Conn worked in New York and Los Angeles, before moving back to Colorado in 1991 when Nick Forster asked him to be eTown’s first music director and band leader.

A desire to focus on writing songs and avoid being pigeon-holed as a “Professor Longhair wannabe” eventually drove Conn to finally move to Tennessee where he still resides.

“I write songs every day. I’m religious about it. I write things that have a strong personal meaning, not [for] other singers. I guess that’s why I haven’t made it as a songwriter in Nashville,” he says.

Steve Conn crafts artful but intense portraits of lost souls and lovers on five solo albums that are reminiscent of the best by Darrel Scott, Marc Cohn and John Hiatt. He’s unafraid to climb inside hard emotions of mortality, depression and hope and emerge with four-minute classics such as “I’ve Got Your Dog,” “One and Only Truth” and “Love Always Wins.”

Conn applies his deft keyboard work and softly accented Southern voice to story ballads, Americana blue rockers and commentary songs that are country at heart but with a percussive Bourbon Street backbeat.

For his upcoming show, Conn will be joined by Chris Engleman, Steve Ivey and Bob Rebholz for a set of his songs, adding Bones Jones and Fly McClard for a night-ending Gris Gris dance party.

Conn hasn’t performed locally since 2016. Because of the pandemic and his introverted tendencies, he doesn’t know when he’ll be back again.

He also accepts his career arc with a soupçon of sarcasm. One of Conn’s catchiest sing-along anthems is aptly titled “I’ll Be Famous When I’m Dead.”

John Lehndorff has written about music in Boulder since the late 1970s.