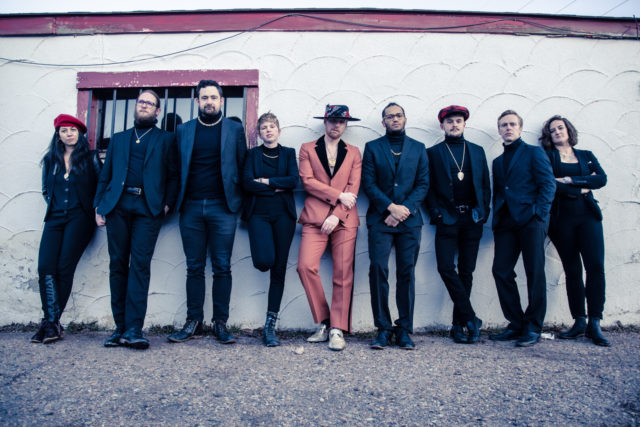 A music pastor and a trumpet player walk into a bar. It’s May of 2013, and Johnny Burroughs — a licensed minister — is at open mic night at Patrick’s Irish Pub in Greeley to perform soul songs by Otis Redding, Bill Withers and other covers from his favorite genre. Craig Basarich — another soul music fanatic and a trumpet player at University of Northern Colorado — is there to take in the music.

Burroughs transfixed Basarich on that late spring evening: his movement on stage, the raw passion in his voice, the way he captured an audience (even a pub crowd) with relative ease. Basarich wanted in. It was there, between distant mountain ranges and nearby pastures, under a soft-orange Greeley sunset, that the two musicians agreed upon a joint performance. Basarich got the horn section together, and Burroughs handled the rhythm section.

“We planned one show only,” Burroughs laughs. That was the agreement, but then the first show happened.

“People went bananas,” he says. “I turned to Craig and gave him that ‘holy crap’ look, like, ‘How is this happening?’ Then we were offered another show.”

That offer turned into another, and another, and another. Local shows snowballed into sets all over the country. Nine years later, the eight members of the “one-off group” known as The Burroughs are now cult heroes for soul music in the least likely of places.

Greeley couldn’t be farther from a hub of soul and funk, both geographically and culturally. Burroughs will be the first to tell you this. The town is an agricultural hub steeped in country twang and old-West tradition. Acres of corn and annual rodeos come to mind, not disco balls and sweat-soaked dancing.

None of this matters to Burroughs, though. As long as he’s got a microphone and a stage to create organized chaos, local popularity is inevitable. Oftentimes, it doesn’t need to be a stage — Burroughs remembers jumping from table to table with his bandmates at the Bohemian Biergarten just off Pearl Street, figuratively setting the pour house on fire with sweaty soul music in the wee hours of the morning.

“I’ve literally been doing it my whole life,” Burroughs explains. “I grew up in the church, and have been leading worship since I was 15.”

The goal has remained the same for Burroughs, whose live presence comes naturally.

“With any show, when people let go and give themselves to that moment, something beautiful happens,” he says.

‘The town supported us first.’

Burroughs never ceases to push for something new in front of an audience. Soul music, throughout its deeply rooted history, demands improvisation. Luckily, Burroughs has a group so deeply entrenched with talent that, if he wants to take a risk, his eight-piece ensemble (four in horn section, four in rhythm section) picks it up seamlessly. The group, whose only remaining original members are Burroughs and baritone saxophone player Hayden Farr, hail entirely from the University of Northern Colorado’s nationally renowned jazz program.

“Our bass player, Brian Claxton, is a doctor of jazz drumming. He tours around the world on the drums, but remains a dazzling bassist with us,” Burroughs says. “Greeley is just an incredible music community that’s allowed us to grow.”

Another facet of The Burroughs’ success is their unwavering dedication to community.

“We’ve always tried to not just talk about what we believe will lift our community up,” says Burroughs, “but to actually stay fully involved.” Their work stretches to numerous organizations, like Weld Food Bank, Greeley Boys and Girls Clubs, Habitat for Humanity, and an ongoing partnership with the Greeley-Evans School District, titled #BandsGiveBack — a campaign giving local artists a chance to uplift area students with the power of music education.

“We used it during the pandemic to raise around $10,000 to purchase instruments for Weld County schools,” Burroughs says. “Since then, we’ve opened it up to music masterclasses for schools around northern Colorado.”

The push-pull between Greeley and The Burroughs is a big part of what gives the band its unique energy, and is a testament to the power of community in fostering a vibrant creative scene. “The town supported us first,” Burroughs says. That’s why, during the band’s inaugural Christmas show, they solicited donations to the Weld County Toys for Tots in lieu of traditional tickets.

Taking a step back and looking at The Burroughs’ ties to the town they represent, the band’s success in playing a regionally unorthodox sound is hardly surprising, and perhaps expected.

The Burroughs first full-length studio album, Got to Feel (2018), came a few years after their debut self-titled EP in 2014. The Burroughs take their time between releases, and when asked about the possibility of another studio album, Burroughs hints at something huge.

“This past spring and all throughout the summer, we’ve been doing some very intense recording and mixing sessions,” he says. “It won’t come out until next year, and this is the first time I think I’ve spoken about it on paper. We are unbelievably excited to give fans our first full-length since 2018. It’s a no-holds-barred, smackdown record, like James Brown and Prince going at it.”

Their most notable release to date, Sweaty Greeley Soul, is a 2015 live recording at the city’s Moxi Theater. It encapsulates everything The Burroughs look to project on stage. On “Intro/Turn It Loose,” Burroughs hypes up his octet in front of a roaring crowd, between pockets of max-volume, horn-bleating, drum-smashing goodness.

Burroughs anticipates a similar atmosphere when the band headlines the upcoming Lafayette Music Festival on Saturday, Oct. 8 at Nissi’s.

This approach to musicality — one of unflinching love and positivity, transferred through the mind, soul and sweat glands — is why a little old farm town, and nearly every town that has hosted The Burroughs since that first performance nearly a decade ago, buys into the mission.

“I just want to make sure everybody walks out of that place feeling like life is good, and that it’s only going to get better,” Burroughs says. “And if it’s only for that night that you could feel it, then we’ve done our job.”