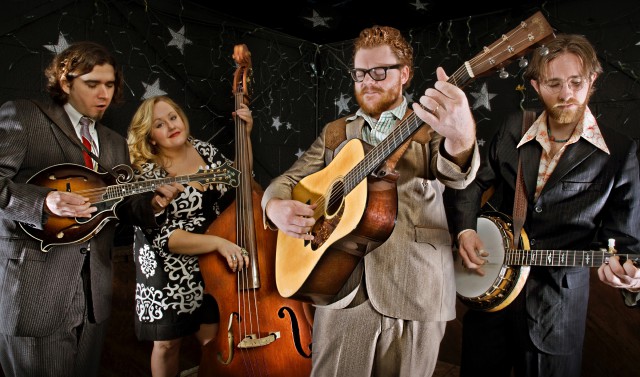 It’s been a long climb for Spring Creek, the first Coloradans ever signed by the blue-chip bluegrass label Rebel Records, and the first band ever to win both the Telluride and the RockyGrass festivals back to back. The band’s fast-ascending status lives up to their new, by far most conspicuous CD, Way Up on a Mountain. They just performed as a showcase act for the International Bluegrass Music Association World of Bluegrass convention, and getting chosen means beating six-toone odds about what a kid has to beat to get into Princeton.

And now they’re coming back from a cross-country tour to play three gigs that make Princeton look piddling: Oct. 16 at the Gold Hill Inn, Oct. 23 at the Fox Theatre and Nov. 27 at the Boulder Theater. On the Boulder Theater, guitar-picking Spring Creek singer Taylor Sims says, “It’s a prestigious venue. Shoot, to be in that ballpark with big names that come through there Son Volt, the High Plains Drifters. It really looks good on a resume!” But the Gold Hill Inn may be even more aesthetically appropriate to the down-home intimacy of Spring Creek’s sound, and they’re eager to get there.

The band got its start improbably in 2002 at South Plains College in Levelland, Texas, where Sims met fellow future fellow Spring Creek singer/songwriters Chris Elliott, who plays banjo, and Jessica Smith, on bass fiddle. If they’d gone to Princeton instead, they might never have made it.

“South Plains is a diamond in the rough,” says Sims. “Not too many people know about it, but it’s got this tremendous commercial music program.” For professional performers, Texas is a great state for music, except for one genre.

So the band (along with singer-songwriter mandolin man Alex Johnstone, whom Sims picked up hitchhiking) got a job in 2004 as the house band at Harmel’s Guest Ranch near Crested Butte in bluegrass-friendlier country. “Our model was we didn’t really have a model. It was just gonna be a fun thing to do for the summer. I was 19, Chris 20 or 21, Jessica 23 or 24.”

So why did they go professional? “We just got to a point where we were really havin’ a good time. We really cut our teeth, played three or four times a week at all five or six venues in the valley. We got a pretty strong foothold. We’d gotten to where we’d played everyplace there was to play.”

They decided to go back en masse

in 2005 to Levelland, so Sims, Elliott and Alex could go back to school. Even their manager came along. They each worked on their craft, and honed the band sound, with obsessive attention to close harmonies. “A lotta great bands’ claim to fame has been harmony, and people loved the shit out of ’em: the Beatles, Eagles, Beach Boys.”

In 2006, they packed up lock, stock and manager and struck out for what may be the most bluegrass-intensive 1,600-person town in America, Lyons. Their timing was exquisite. The one-two punch of O Brother, Where Art Thou? and Cold Mountain made a quaint style hip. “They helped bluegrass turn a corner, from a hillbilly novelty music to something cool.” It doesn’t matter how good you get if there’s no market for your expertise. Now there was.

And Lyons proved the perfect miniature springboard to bigger things. They started making an album a year ago, won Telluride and RockyGrass and an Independent Music Award for the Coloradothemed High Up in the Mountains.

The crucial big break they’re riding right now started when they scored Jeff White to produce the third album, Way Up on a Mountain. A Nashville eminence who played for years with Vince Gill and Alison Krauss, White was just what the sonic doctor ordered. “He brought a lotta polish to our sound,” says Sims.

The sound is rooted in gospel, among other things, but also obeys the first commandment of modern traditional music: no depression. “We’re not a sad band singin’ about terrible lonesome topics,” says Sims even though their second album is called A Lonesome Way to Go. “The melancholy stuff comes from the tradition of sad songs that cheer people up. You sing about your sorrows and supposedly they’ll go away.”

One pure moment on the album is the transition from Smith’s soulful, admonitory waltz-time lament “Slow Down” (“When you’re called up yonder, what will you have to ponder? It’s your heart, not the things that you had. Slow down, you’re moving too fast”) to Sims singing “In Despair,” a peppy number that leaves despair in the dust.

Sims likes listening to Smith’s voice better: “She’s got a great kind of mountainy timbre to her voice, very emotive mountain singing. She’s got a raw quality.” Smith sounds like Gillian Welch if somebody slipped her some coffee on the sly to trick her out of those lugubrious tempos, without losing the smoky croak of woe that makes listeners feel sensational.

Sims’ own favorite on the album is “Tangled in the Pines,” about a young man whose dreams are on a oneway track about to collide with his girl’s coming the other way. “Our banjo player, his cousin Ronnie Elliott wrote that. He’s just a workin’ stiff in East Texas. He thought it would fit our style.” In fact, it goes a good ways toward defining it.

To Sims, the band’s current success just makes sense. “We’ve put a lotta time into getting it right,” he says.