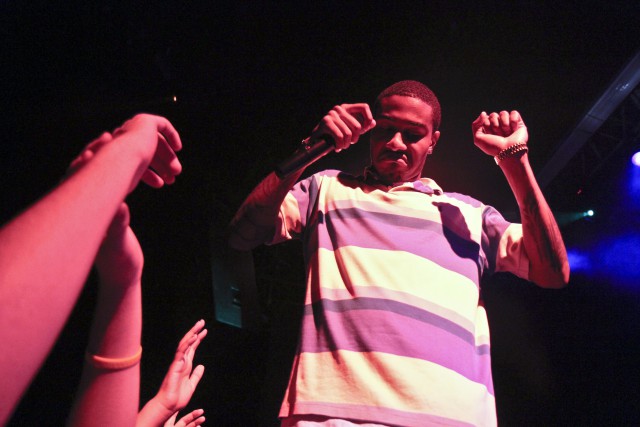 “It’s the new, black
version of the Beastie Boys!” sang The Cool Kids to a hungry young crowd at the
Fox. I don’t know about that. I don’t know how that is really even possible — that’s like
trying to convince someone that “We’re the new white version of N.W.A.” The
Cool Kids are not out to flip racial hegemony, way more interested in being
their subtly quirky selves and welcoming the audience into a good time.

Sure, the crowd
was mostly male and nearly all white, but what else do you expect from a hip-hop
show in Boulder? It was a summery Tuesday night when they stormed the stage and
the crowd peaked at around 300 people, about half of the Fox’s capacity. No one
made a big deal out of this fact, neither the group nor the crowd themselves. Even
well-established hip-hop acts have undersold the Fox, and without a lot of
recent buzz, The Cool Kids drew a much better crowd than I expected. But small
shows like this are always inherently interesting. They are all-or-nothing
moments, and an awesome sight to witness because it means the artist will
either greatly fail or greatly succeed.

The Cool Kids had
no problem vibing with Boulder. They noticeably toned down their hipster
appearance, swapping the full-body prints for frat polos and taking the stage
with a relaxed and genial swagger. And Boulder had no problem vibing with the
Kids, eager to throw hands in the air and sing along to every song. The only
people who left early were the ones who were escorted out for “forgetting”
their wristband, which seemed to be one person every 10 minutes.

The crowd was
young, no doubt, but the Kids seemed to have grown up a little since becoming a
breakout act around 2007. Their debut album, When Fish Ride Bicycles,
took until this year to materialize and the duo has moved forward with their
recognition after spending years without any more than a handful of blogged
mp3’s. Songs like “Gold Chain and a Pager” became typical of their style, with
a taste for icy 808 thumps and a somewhat ironic choice in bling. But even
though the title “hipster hop” continues to follow them, their personalities
don’t reflect the hipper-than-thou connotation and the best part of the show
was their openness to the audience, however small it happened to be that night.

It’s nights like
this when the fans really take over, when a particularly enthusiastic kid in a
white printed tall tee is yanked onto the stage without warning and handed the
mic. The result was less than impressive: though incredibly enthusiastic, he
gave an inaudible plug for some company he’s starting before gushing about how
The Cool Kids’ beats and raps are the best, the best, the best … they’re the
best!

And that’s all the
convincing it took for Mikey Rocks and Chuck Inglish to split to the sides of
the stage and give him the full spotlight. “You think you know this next song?”
they asked the clearly nervous and underage kid, then instructed the crowd to “get
after him” if he doesn’t. Then the two members peeled away and it was this
lone, unsure kid who unexpectedly had the mic in his hand and the crowd waiting
for magic to happen. Unfortunately, it took exactly a half of a second for him
to run to the nearest member and give back the mic, but the effect worked out
just fine. This was everyone’s party, and if the kid hadn’t apologized to the
band for so long it wouldn’t have been surprising for them to grab the next MC
in line.

But even though
the young crowd was, typically, super-enthused with everything going on, the
general vibe from the audience was just as cool as the Kids. The 808 shake of “Bassment
Party” was my pick of the night, which both brought the crowd to a peak and
summarized the carefree party jams that they are known for. “Summer Jam” was an
effective if ill-timed bit of relaxation.

“I feel like I’m
on a boat right now” Chuck announced as Mikey organized one of the most
coordinated arm sways I’ve ever seen at a small hip-hop show at the Fox.

It was a great
night for fans (unless you were caught being 18 and drunk), and it was a shame
to see such a lack of non-fans, simply because they would have easily been won
over. The solid performance far outpaced the undersold crowd and gave the Kids a
further nudge into longstanding legitimacy. With lots of room to move around
and every hand in the air, what more can you ask from a Tuesday night show?