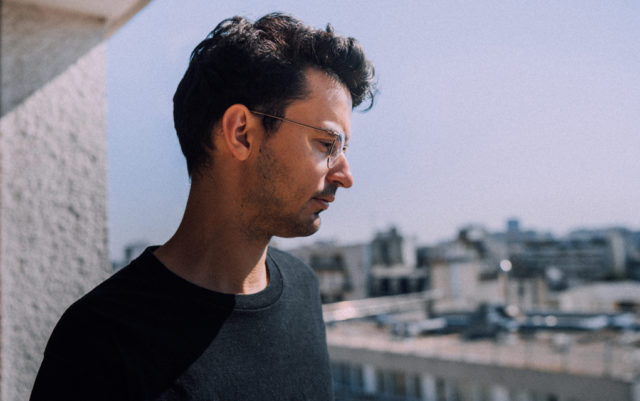 Two black holes circling each other deep in space, going round and round until they finally collide. The impact sends waves rippling out into the universe, gravitational radiation warping space and time. Undetectable until just a few years ago, Albert Einstein’s theory of relativity first predicted the existence of gravitational waves in 1916, sending scientists on a century long journey of discovery — a search to record and observe the effects of massive, violent cosmic collisions and explosions.

Zimmer’s dad was one of those scientists, and the Parisian DJ and producer’s first single, “Landing,” off his forthcoming album is a tribute to the years of work that culminated in the scientific discovery.

“I wrote the track in one afternoon,” Zimmer says from his apartment (and studio) in Paris. “I felt this sensation… after awhile I realized it was the exact same feeling I had when my dad told me he had discovered gravitational waves. It’s all based on that feeling of looking for something for a very long time and it finally coming together.”

Like the gravitational waves that break through the space time continuum, rippling through the universe at almost undetectable speeds, the different elements of Zimmer’s music bump up against each other creating entire worlds as they interact. Tropical drumbeats run into synthesized melodies, torn in two by gently plucked piano and blaring trumpet notes. Almost impalpable laser sounds layer in the background, occasionally breaking into center focus with hypnotic capability. While potentially chaotic, the end result is anything but; what it’s saying is up to the listener.

The musician began his career about a decade ago, inspired by the nu-disco and related French Touch movements, a mixture of 1970s disco, ’80s dance and ’90s house music, popularized internationally by artists like St. Germain and the duo Daft Punk.

For the album, Zimmer spent 18 months in the studio, immersed in memories that influence each track. His apartment building in Paris is taller than most others around, with large windows overlooking half of the city, creating an airy, floating sensation Zimmer encapsulates in his music.

“I basically just sit here all day watching through the window and watching the colors change, I can see the sky, and everything is moving,” he says. “And I feel like I’m in a little cloud, and that’s influenced a lot of tracks on the record.”

He’s made a name for himself in the DJ world, comfortable performing behind a CD turntable and mixer, somewhat separate from crowds, whether it’s at a dark night club or a tent at Coachella. But, for his current U.S. tour, Zimmer will forgo the DJ booth and perform live, alone on stage.

“It’s kind of exciting and scary for a French kid, but it’s awesome at the same time,” he says. He’s thrilled by the freedom of a live show, to play off the audience, switch up the tempo, skip tracks, throw out the set list entirely. It’s an immersive experience, he says, replete with fog machines and an intricately constructed light show.

“It’s kind of weird because there is no formula for it,” Zimmer says, excited by the prospect. Like traditional rock bands with various members playing individual instruments, Zimmer has broken down the different elements of each track into different instrumental aspects and will use synths and a variety of machines to mix live.

“I’ll be there with basically all my songs cut down like a band, with the drums and the bass and I can interact with each element,” he says. “And sometimes I’ll play the melodies or the bass depending on each crowd and then I can kind of mix up everything together and create new parts by combining different parts of different songs.”

Zimmer describes a certain sense of mystery that encompasses the French electronic scene he’s establishing himself in; it “works both in the underground and in the mainstream without ever being cheesy,” he says. It’s “pretty underground and danceable, and at the same time pop in a good way, in a listenable way.”

And yet, he says, the dreamy, California aesthetic he experienced as a young kid plays an even greater role in his music than the clubs of Paris, as he spent his childhood living in both France and Los Angeles, where his dad worked on detecting gravitational waves at CalTech.

“Knowing there’s something else than where you’re living as a kid, I think it made me more curious and open,” he says. This curiosity is the essential fabric of Zimmer’s music, a universal curiosity that can lead both to scientific discovery and artistic expression.

Check out Boulder Weekly’s playlist of French Touch inspired by our conversation with Zimmer on Spotify.