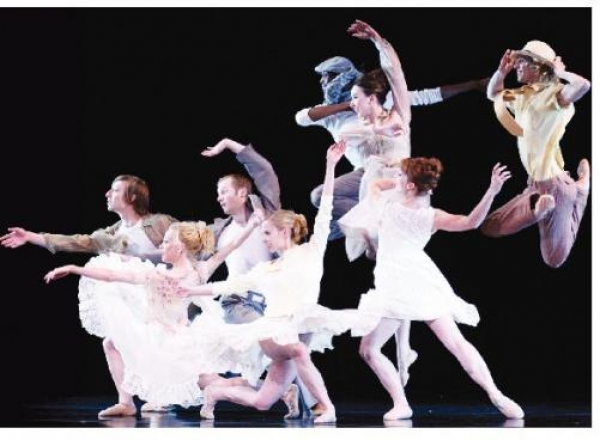 What began as a coincidence has become a ballet. After being serendipitously featured together in both Westword and 5280 magazines, Denver band Paper Bird and Ballet Nouveau Colorado have joined forces to create “Carry On,” a full-length, multimedia performance that will be presented Feb. 4-6 and Feb. 11-13.

BNC choreographer Garret Ammon’s interest was piqued when he read reviews of Paper Bird in the same magazines in which his dance company was featured.

“When I read a description of their music that included every genre of American music you can think of, I had to hear it. I went and bought all of their music and just fell in love with it,” Ammon says. “To seamlessly bring together all of those genres in a very genuine way like they do is just such a beautiful thing.”

When Ammon approached Paper Bird about collaborating, the band emphatically agreed. The seven member folk/Americana band then embarked on a several-months-long period of songwriting and intense practice, which ultimately broadened the scope of their sound.

“When you have a band that’s doing something right, you tend to just stick with it, but for these shows we wanted to really push the limits of this self-imposed formula we’ve been working with,” says Macon Terry, who plays the upright bass for the band. “We saw it as an opportunity to really stretch our creative means and bring out different elements or ideas that we’d been kicking around for awhile.”

To increase the breadth of its musical exploration, the band decided to bring in two new members for the shows. Between them, they’ll bring accordion, percussion, piano and clarinet to the band’s auditory arsenal.

“The sound is going to be so much bigger,” Terry says. “There are some songs that are reminiscent of what we’ve done before, but people who know our music will notice that there’s a lot more depth. Having two more people has allowed us to get into different genres that we might have hinted at before but weren’t able to completely pursue. It’s a different side of us; we’re practically a different band at times.”

Having never written music for a ballet before, the band began its creative process by watching videos of ballets and listening to dance scores. While Ammon had given them some vague outlines to work with, he mostly wanted them to have free reign to follow whatever inspiration stuck them. The band ended up writing about an hour of new music, most of which is seamlessly segued with instrumental sections.

As the band worked on the new music, unplanned thematic elements began to emerge. Themes of impermanence, travel, tranquility and the ocean manifested lyrically, while certain melodic motifs appeared as well.

When the music was complete, the band sent it off to Ammon, who then interpreted the music into movement and worked out the choreography with the nine dancers from the company who will be performing. While the dancers are all classically trained ballerinas, the movement in “Carry On” falls under the contemporary dance genre. It’s only been within the last few weeks that the band and dancers have begun rehearsing together.

“It’s unreal,” Terry says. “It’s collaboration on a whole new level that I don’t think any of us in the band have experienced before. At points, the dancers visually and literally represent the lyrics, like when we’re singing about the ocean and they form waves. At other times they’re moment to moment involved in every beat we’re doing; they’re right there with us.”

That sort of cross-disciplinary collaboration is what Ammon is most passionate about. During his time with BNC, he’s worked with poets, visual artists and even a jazz quartet to blend dance with a variety of art forms.

“This show is a must-see for any Paper Bird fan, dance fan or anyone who enjoys great local live music,” Ammon says. “The hope is that we’ll have some dance fans that become Paper Bird fans and vice-versa, so that people can see how these different art forms really complement each other so well.”

“Carry On” plays
the Lakewood Cultural Center Feb. 4-6 and the Performing Arts Complex
at PCS in Denver Feb. 11-13. Tickets start at $17, $15 for
child/student/senior. For more information, visit www.bncdance.com/
carry-on-2011/