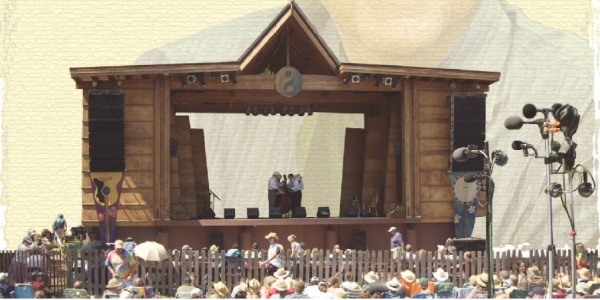 Peter Rowan is one of those risk-takers who’s so dexterous in his abilities as a bluegrass guitarist that he can play with just about anyone, under any circumstances. And it’s this versatility that placed him in the middle of some of those legendary moments in the halls of bluegrass mythology.

Whether it’s his stint as Bill Monroe’s guitarist, or a successful run with Old and in the Way, for Rowan, these moments — all the collaborations and events — add up to a collective legacy, and he’s paying tribute to it with his forthcoming album, appropriately titled, Legacy.

“This band I have now, this is the first time I’ve had a bluegrass band under my own name,” Rowan says. “You’ll hear a lot of Old and in the Way in this band, because it’s the same approach. And it’s the first band since Old and in the Way that gives me that feeling. We’ve come this far and lost a lot of people along the way, and so my music is all about that. It’s the legacy of the whole thing.”

“Plus, I have a new gospel tune called, ‘God’s Own Child,’ and that features Del McCoury and Ricky Skaggs,” Rowan says. “And then I’ve got a tune called ‘So Good,’ and it’s got Gillian Welsh singing and Dave Rawlings playing guitar. It’s ‘Legacy’ in that it’s all my old and new compadres in the string-band music, plus some traditional tunes that we draw upon all the time. It’s a very traditional-based band. But they go with me where I want to go. If I have an adventuresome song, they’re good with it.”

For Rowan, the bluegrass legacy began back in 1964, when he won an audition in Nashville to play guitar for the Father of Bluegrass, Bill Monroe. Thus began Rowan’s professional career as a musician. For two-and-a-half years, Rowan toured with Monroe across America and England, playing the Grand Ole Opry each week.

And before his tenure with Monroe ended, he had recorded a total of 14 songs as one of Monroe’s Bluegrass Boys. But
Rowan had the itch to expand his style, whereas Monroe had his way of
doing things. To be a Bluegrass Boy meant playing it by the book, with
loyalty to Monroe’s way and nothing else.

“By
the time I had reached him, it was fiddle, guitar, banjo, bass and
mandolin — the five solid building blocks of bluegrass,” says Rowan,
who at the time wished to push the envelope stylistically. “He was in
his 50s and he’d passed through that experimentation stage. I think he
went through it like everybody else, always trying to find where square
one is — home base. When I was with him there were sparks flying all
the time, because I was young and wanting to do this and do that, and
he told me, ‘It’s been as much work to keep things out of bluegrass as
it is to add them to bluegrass.’“ Rowan would eventually form
bluegrass-rock hybrids, complete with drums, which at the time was a
disturbing blasphemy to genre purists.

But
after Rowan left Monroe, he joined mandolinist David Grisman in 1967
and formed Earth Opera, which released a couple of albums on Elektra
Records and even opened for The Doors on many occasions. They disbanded
in 1969, however, with Grisman heading out to the West Coast, and Rowan
joining up with a band called Seatrain. In 1972, Grisman brought a
Grateful Dead album to Rowan that contained a cover of the traditional
song “Cold Rain and Snow,” which Rowan had coincidentally played often
in Bill Monroe’s band. Intrigued, Rowan went with Grisman to play with
Jerry Garcia, which led to the birth of Old and in the Way, a
traditional bluegrass band that included fiddle genius Vassar Clements
and John Kahn. Although this was a highly structured bluegrass band,
Rowan’s yearning to expand the music still called to him, and he opened
the door for some extended jamming with the song “Midnight Moonlight,”
in which he wrote a guitar solo.

“The
first song that got recorded was ‘Midnight Moonlight,’ where I wrote a
bridge that was the solo section,” says Rowan. “And I’d look over at
Garcia, and his eyebrows would just be way up there going, ‘Yeah, this
is good.’ Whereas other people would be like ‘Is it gonna be four bars?
Is it gonna be eight bars? How long are we gonna do this? When do we
come back in?’ And to this day, it’s all done by feel. And that’s what
keeps it fresh.”

Old
and in the Way lasted until 1974, and the self-titled album wasn’t
released until 1975, a year after they disbanded. During this time,
Rowan penned the rockin’ country songs “Panama Red,” and “Lonesome L.A.
Cowboy,” which were staple hits for New Riders of the Purple Sage. A
little later, in 1976, Rowan met Tex-Mex accordion player Flaco
Jimenez, and together with fiddler Tex Logan, the three formed the Free
Mexican Airforce. After that, Rowan embarked on what has become a
highly successful solo career that has ranged from bluegrass to country
hybrids, and even reggae. Then, in 2002, surviving members of Old and
in the Way reformed for a reunion tour called Old and in the Gray.

Rowan explains that at the time, he wasn’t sure about the intentions behind the reunion.

“It
was like, ‘Are we carrying on the legacy? Are we revisiting the past?’”
he says. “It raised the question, ‘What are we representing?’ You had
five different guys with five different minds up there. But in the end,
the music wins out. The thing about Old and in the Way was, as Garcia
said as we walked off stage and people started grumbling about this and
that … he said, ‘No thoughts.’ Just go for it. Go for the groove.
Stop thinking.’” Rowan’s latest album was 2007’s Quartet, the
second collaborative effort with acoustic guitar master Tony Rice. But
with his new album, Rowan is taking all of his collective experience,
all of those legendary moments, and wrapping them up in what amounts to
his first traditional bluegrass album release since back in the day.

“Bill
Monroe said, ‘Pete, you stick with bluegrass. If you can play
bluegrass, you can play anything,’” Rowan reminisces. “I took the
electric band concept as far as I could. You know, drum-based,
bluegrass-style kind of jamming and picking and stuff. That was fun.
Now everybody’s doing it, so now I’m back to the basics. I never dared
to put the name Peter Rowan together with ‘bluegrass band’ before. But
that’s how it is now.”