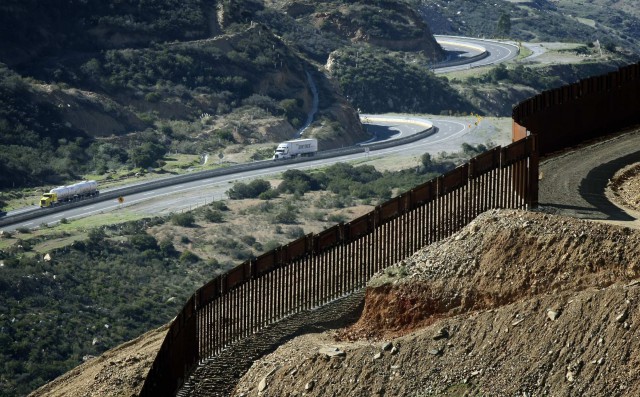 — The bedraggled immigrants were picking their way through the boulders
and scrub when a group of heavily armed men descended on them just
short of the – border. They corralled them in a cave and pointed their guns on the 10 men and one woman.

These lawless badlands in the hills east of
have long teemed with bandits and rapists, but these criminals demanded
only phone numbers. They started calling the immigrants’ loved ones in , and : Send us money or we’ll shoot, they said.

The days-long kidnapping ordeal in May illustrates
what authorities say is a growing trend as roaming gangs of
well-organized, heavily armed gunmen turn their sights on illegal
immigrants, making a treacherous journey ever more dangerous for people
trekking north.

In the rash of kidnappings, which began about two
years ago, gunmen hold people captive until family members in the U.S.
send wire transfers of up to to accounts in . Some immigrants are beaten; several have been killed, including a pair of brothers from . Many straggle across the border and turn themselves in to U.S. Border Patrol agents. Others end up in migrant shelters in , too frightened to report the cases to Mexican police.

Little was known about how the criminals operated
until Mexican authorities dismantled two gangs in recent months,
including the one involved in the May case, in which 11 suspects were
arrested after a shootout and a wild foot chase through the hills.

The arrests provided authorities with a rare glimpse
into criminal networks whose reach stretches from the border to cities
across the U.S. and . The gang was allegedly run by a career criminal from the state of
and included a former Mexican army soldier. They admitted kidnapping
more than 100 immigrants over 18 months, holding them in remote caves,
makeshift camp and ranches.

“We threatened the families that if they didn’t pay we would kill the immigrants,” said , the alleged ringleader, in his statement to detectives, referring to the abductions in May.

Authorities believe several gangs continue to
operate. With a network of lookouts scattered at key points across 60
miles of rugged, isolated terrain, few immigrants slip by them without
the gangs’ knowledge.

“They know all the trails leading to the border, from to and the ” mountain range, said , a assistant attorney general. “They know exactly where they’re going, how many are walking, and they’re all intercepted.”

The current situation resulted from a convergence of factors in the U.S. and that put increasing pressure on the traditional human smuggling groups in the area, according to authorities in both countries.

Organized-crime bosses in ,
squeezed by a drug war, demanded higher payoffs, while U.S.
authorities, adding fencing and staffing on the border, were making it
more difficult to get immigrants through.

With a smuggling infrastructure already in place, it
was easy and profitable for criminals to switch to kidnapping. Federal
authorities in the U.S. immediately noticed the trend. Many immigrants
began showing up at the border seeking medical attention instead of
eluding agents.

“They’re traumatized,” said , a supervisor for Immigration and Customs Enforcement in , which investigates smuggling groups in the area. “They jump the fence into the U.S. looking for help.”

The journeys start out straightforward enough. In ,
recruiters scour fleabag motels that house immigrants waiting to cross
the border. Offering safe passage, the recruiters transport the
immigrants to staging areas in the ranch lands east of the city. Many
of the recruiters and drivers are women who bring along their children
to put the immigrants at ease.

At the staging areas, guides lead the migrants into
the mountains, on well-worn paths, into the hands of gunmen. “For the
guides it’s a win-win proposition: They don’t have to cross the border,
or risk being captured by the Border Patrol, and they still get paid,”
one Mexican federal agent said on condition of anonymity because he was
not authorized to speak with the media.

The deception doesn’t end there. One gang, arrested
in April, would plant a member in the group of immigrants. When asked
for a phone number, he would immediately provide it and be rewarded
with good treatment. Other immigrants, seeking to avoid beatings, would
do the same.

“You’ve saved yourself,” the kidnapper told a gang
member disguised as an immigrant, according to one victim in a
videotaped interview with authorities that shielded his identity. “He
acted like an immigrant, but we found out later that he wasn’t. We
realized that they had never hit him.”

In the May kidnapping, 11 immigrants were walking through the hills off the –
toll road when they were confronted at gunpoint. They were stripped,
tied up and watched over by several gunmen while their families were
contacted and ordered to wire to gang associates in .

A couple of days later, Mexican authorities stumbled upon the gang during a routine patrol. In the ensuing gun battle, a
deputy police chief was wounded in the leg by AK-47 gunfire. The group
was eventually captured, and members led police to the alleged
ringleader, Flores.

The highly publicized arrests have made immigrants
aware of the dangers. Cupartin Sanchez, 27, interviewed at an immigrant
shelter in , said several smugglers had promised to get him across the border. He doesn’t trust any of them, so he’s going home to .