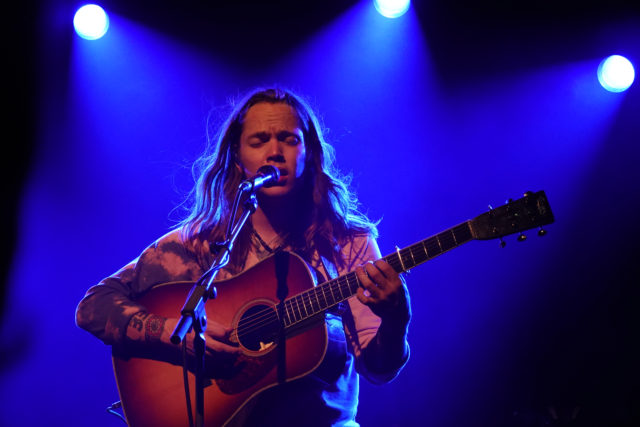 When Sam Bush takes the Boulder Theater stage on Feb. 20, he will be coming back to his musical second home. With the groundbreaking New Grass Revival, the mandolin legend first played Boulder shows in the late 1970s. Local fans were immediately wowed by the new hybrid of jazzy, bluegrass-y rock music the band played.

Whether it was labeled “newgrass,” “progressive bluegrass” or eventually “jamgrass,” Colorado sipped the Kool-Aid and birthed a bevy of bands including Leftover Salmon, The String Cheese Incident and Yonder Mountain String Band.

How this state became the unlikely epicenter of an American music genre is celebrated in High on a Mountain—An Oral History of Jamgrass in Colorado, a new book by veteran Denver author, journalist and musician Nick Hutchinson.

“When we got to Telluride for the first time and we looked out from the stage there, we felt like, ‘Wow, this audience is just like the country out here—wide open and ready.’”

Nick Hutchinson says he first heard the “J” word when he started writing about music for local publications. “They knew I was a Deadhead, so I became that guy if a band came to town that fit somewhere in that ‘jammy’ category. I was covering a lot of jam bands like Phish and a lot of local acoustic bands, and they converged. This was the music I absolutely wanted to write about,” he says. Hutchinson’s writing has appeared in Relix, Westword and at jambase.com, and he also penned the book Channeling Jerry: How the Music Plays his Fans.

What Hutchinson noticed is that even though jamgrass was a significant American musical genre whose roots branched back more than half a century, nobody had written a book about it.

High on a Mountain takes its name from the tune first recorded by Del McCoury in 1973, and later recorded by Boulder’s Hot Rize. “The book was an exploration for me to answer these questions I had about the music,” Hutchinson says.

For the volume, Hutchinson interviewed the musicians who instigated and propagated the genre, including Peter Rowan—“a gem!”—plus Vince Herman, Tim O’Brien, Billy Strings and Paul Hoffman, as well as Planet Bluegrass head Craig Ferguson. They tell the tale of a half century of high-altitude music.

Should we just call it “metagrass?”

Like any good oral history, High on a Mountain is chockablock with spirited disagreements about the name of the genre, its origins and instrumentation.

“I don’t think people even like the term (jamgrass). . . It’s still not my favorite expression, but everyone knows what it is,” Ben Kaufmann, bassist for Boulder’s Yonder Mountain String Band, told Hutchinson.

No matter what it is labeled, the musicians do agree on the origins of grass music in traditional bluegrass and its intersection with rock and jazz.

All the music was built around elevated musicianship, an open mind and a willingness to stretch out in an instrumental conversation. In other words, they started jamming in the 1960s. “It wasn’t called jamgrass, but it existed,” Peter Wernick—“Dr. Banjo” of Hot Rize—told Hutchinson.

Hutchinson interviewed the Niwot-based Wernick twice for the book and praises him as a “living encyclopedia.”

“He was there at so many pivotal moments in the development of this music,” Hutchinson says.

It may have many origination points and parents, but almost everyone interviewed in High on a Mountain agrees that jamgrass music as we know it was forged in Telluride. On the heels of Woodstock, the Telluride Bluegrass Festival became the nexus for several generations of progressive bands and the template for festivals nationally.

“It started with John Hartford and New Grass Revival who loosened things up. They set the stage for bands like Leftover Salmon, who called it ‘polyethnic Cajun slamgrass.’ Jamgrass started bubbling up with Salmon and String Cheese. They had drums and more electric instruments,” Hutchinson says.

In the process, a hard-to-access outlaw town in a Colorado mountain valley, along with Lyons, Boulder, Nederland and Crested Butte, became hotbeds of progressive music in its myriad mutations.

“It was like-minded people coming together. The musicians weren’t all from the same place but they were on the same page musically. Colorado’s one of those places where that can happen,” Hutchinson says.

Jamgrass: The next generation

The consensus torchbearer for jamgrass is the remarkable guitarist, singer and bandleader Billy Strings. The genre continues to be invigorated by new local musicians and bands including Trout Steak Revival, Bowregard, Woodbelly, Meadow Mountain and The Railsplitters

All along there was one thing missing from jamgrass, as it had been missing in bluegrass: Women. Except for a handful of singers and musicians, women have rarely been seen on these stages in Telluride, Lyons, Red Rocks and Boulder.

Gradually, the grass ceiling is being shattered. Pioneers like Alison Krauss and Alison Brown have been joined by exceptional musicians including Sarah Jarosz, Molly Tuttle, Sierra Hull and Becky Buller in undoing the boys’ club.

Jamgrass has often been ridiculed and dismissed, but its triumph in Colorado is obvious. The proof is in the booking. The coming months are jam packed with local concerts by Bush, Tuttle, Yonder Mountain String Band, Infamous Stringdusters, Billy Strings, Railroad Earth and Punch Brothers, plus all the famous festivals.

“(The jamgrass bands) keep the music alive and well. It’s exciting to think what the next iteration will be,” Tim O’Brien told Hutchinson.

John Lehndorff has written about bluegrass music in Colorado since the late 1970s and covered the Telluride Bluegrass Festival for 30 years. He contributed a personal account of the early days of Colorado jamgrass to ‘High on a Mountain.’

ON THE SHELF:  High on a Mountain is available at: store.bookbaby.com/bookshop/book/high-on-a-mountain