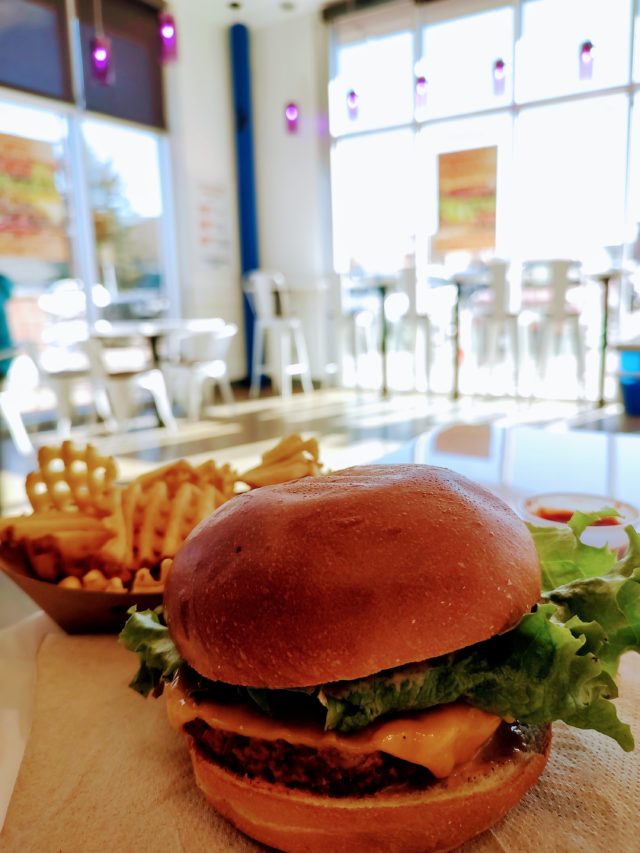 It’s not like Boulder was in dire need of another burger joint. Within a few blocks of the newly opened Meta Burger at 29th Street are Five Guys Burgers, Smashburger, Shake Shack, Snarfburger, Larkburger and Good Times, not to mention McDonald’s and Burger King.

There’s also no dearth of veggie burgers in the neighborhood since almost all the burger places also serve plant-based patties. But Meta Burger—located near the electric vehicle charging station on the north side of the outdoor mall—steps it up a notch with a totally plant-based menu.

I ordered Meta Burger’s Classic, a patty on a bun with American “cheese,” 1000 Island-like special sauce, sliced tomato, leaf lettuce and pickle slices with appropriate condiments. On the side: skin-on waffle fries and a peanut butter shake.

Inside the fluffy brioche bun, the substantial, moist, four-ounce patty closely echoes the flavor and crumbly chew of beef. The orange “cheese” is less convincing with telltale nuances of nutritional yeast. Taken together with toppings, it’s a satisfying burger that doesn’t taste like a sacrifice.

I dunked waffle fries in an oatmilk-based peanut butter shake that was cold and sweet, but lacked the creaminess and additive-laced dairy mouthfeel of a Wendy’s Frosty.

This is the latest foray in my mission to meat-and-greet the major plant-based fast-food and fast-casual burgers. After tasting the Meta Burger, I’d rank it tops on my faux burger list, followed by the Red Robin Impossible Cheeseburger, Carl’s Jr. Beyond Famous Star Burger and the Burger King Impossible Whopper.

McDonalds still hasn’t managed to get its poorly named McPlant burger into its eateries.

As the novelty about plant-based burgers, fried chicken and eventually seafood wears off, taste may matter most. Increasingly, sustainability and corporate integrity are becoming a deciding factor for diners. With a plant-based menu, compostable containers and straws, recyclable cups, no plastic and lack of drive-up window, Meta Burger seems to walk the sustainable talk. For diners, that means a decrease in fast-food guilt and a happier meal.

The Oasis Brewery now brews and serves in a renovated Denver church, but it opened originally in 1991 as one of Boulder’s first craft breweries at 1095 Canyon Boulevard. Greg Nesley, an Oasis Brewery cook at the time, shared this recipe for creamy Potato Parmesan Soup in 1997. Needless to say, the soup should be accompanied by a brew like Oasis’ Tut Brown Ale.

2 cups heavy cream (substitute half & half)

Boil cubed potatoes in water until softened but not mushy. Drain and set aside.

In a saucepan, saute celery, onions, shallots and garlic in butter, add white wine and a pinch of salt and pepper. Simmer until slightly softened. Blend in a blender or food processor if you want a smooth soup.

Pour back into the saucepan, add potatoes and cream and simmer over medium heat, stirring constantly for about five minutes. Turn heat to low and stir in grated cheese and paprika. Taste and adjust salt and pepper. Pour into bowls and garnish with green onions and a sprinkle of cheese.

Variations include adding a 1/2 cup of roasted chopped green chile and substituting bacon fat for the butter.

The Boulder Valley School District’s Iron Chef Cooking Competition for teams of middle schoolers is serious stuff. It comes with the opportunity to have their recipe featured on next year’s school lunch menu. Recipe entries due Feb. 18. Details can be found at: food.bvsd.org/programs/community-events