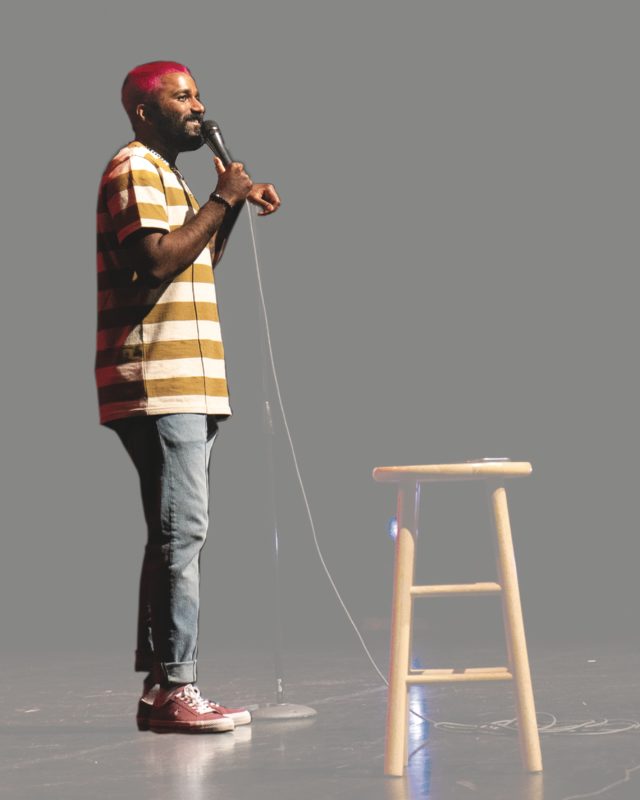 Mark Twain once wrote, “Laughter without a tinge of philosophy is but a sneeze of humor. Genuine humor is replete with wisdom.”

Boulder comedian BK Sharad’s philosophy is that everyone is fair game.

Sharad doesn’t want to be mean about it, he says. The jokes aren’t meant to punch down, and he certainly doesn’t spare himself during his shows. Even after a rough set, Sharad looks for the humor and laughs it off.

“I have a joke that came from when I was driving home (after a bad set), where I was thinking about driving off the road but my car’s lane assist is too good,” Sharad says wryly.

Jokes about his mental health aside, Sharad says using comedy as a platform to discuss mental health is important to him. Sharad is frank about his struggles with depression and anxiety, especially after the isolation of COVID lockdowns.

“I try my best,” he explains. “Sometimes people get weird about it, because it’s an uncomfortable conversation to have, but it’s important to have that conversation so people know they aren’t suffering alone.”

It’s probably why Zoe Rogers put him on the lineup for this year’s Boulder Comedy Festival, June 23-26, a diverse roster of comics from Boulder, Denver and beyond performing at venues around the county.

“I don’t like mean comedy,” Rogers says, “the punching-down stuff where you don’t want to laugh because you feel bad. I like the very vulnerable, personal and self-deprecating (comedy), where we’re laughing with the comic.”

Rogers says that the Boulder audience responds well to that style of comedy, meshing well with the lineups she wants to make space for. Bringing comedians to the stage who offer differing perspectives broadens the appeal, she explains, giving the audience more to connect with.

Rogers’ comedy—hilarious recountings of the trials of motherhood and marriage—came from her own need to connect with people over the constant disasters of parenting. Rogers recalls an anecdote, working with another comedy writer who happened to be a single guy. The writer jokingly said that using her kids for material was cheating, because they practically write the jokes for her.

“Do you want to trade?” Rogers says with a laugh. “I’ll sleep in, shower and form full sentences. You can occasionally get a funny tidbit about how broken you feel.”

Starting in the Los Angeles comedy scene before moving to Colorado, Rogers made it a goal to find more diverse comics after her experiences sharing the stage with more cis white men than women or people of color.

“If it was a really diverse show back then, it was eight straight white guys, me and maybe a Black comic,” she says.

The irony wasn’t lost on Rogers when she was told that having two women on the same set might seem redundant. Two women with wildly different life experiences and comic tendencies couldn’t possibly be more redundant than eight straight white guys, so she started booking her own shows.

Diverse line-ups and all-women comedy sets would help Rogers create reference sheets for other comedy bookers, she explains. Setting up shows would in turn help those diverse comics get booked in more shows.

“I tried to consciously do it, where I’d look at my lineups and say, ‘Oh, this is heavily male,’ or, ‘This is looking pretty white,’ or, ‘I don’t have any gay comics,’ because that’s what pops in my head,” Rogers says. “Because that’s what pops up when I look at other people’s shows. How many different perspectives am I getting? Is this going to be a rerun? So I do consciously make things diverse, because representation does matter.”

All of which would lead to Rogers and her friends launching the Boulder Comedy Festival, returning for its second run this year (after COVID halted the original launch in 2020). Across four nights and a half-dozen venues throughout the county, 30 comics—including Sharad, Rogers and Gabby Gutierrez-Reed—will take the stage to break some funny bones.

Denver-based Gutierrez-Reed leans on the kind of self-deprecating humor that pokes fun at her own mental health, family and ethnicity as a Mexican-Norwegian woman, along with her job as an educator. Gutierrez-Reed started studying improv about a decade ago, she says, before making the switch to stand up.

Gutierrez-Reed says she was enamored by the joy of standup, particularly the addiction of making other people laugh and how people relate to her sets. Acknowledging that she’s been lucky enough to get booked consistently over the past few years, even through a pandemic, her hard work has paid off. The support she’s received from other comics has been a boon through all of it.

“As a Latina woman I would say there are all kinds of different experiences,” she says. “I’m really happy that our scene has evolved into being very supportive. Women and nonbinary comedians are very supportive and there’s an amazing queer scene.”

Passive-aggressive comments still happen, but Gutierrez-Reed says she tries not to dwell on them too much. Instead, she focuses on the better parts—laughing with her friends, hearing new sets and producing women-run shows like Firecracker Comedy. Producing has helped her think about the flow of comedy shows and, like Rogers, building out diverse lineups.

Through the pandemic, when live shows were impossible, both Gutierrez-Reed and Sharad took to performances through Zoom. Echoing each other, both comics lamented the difficulty of being distanced from an audience. Gutierrez-Reed says the best shows were when the virtual audience had their mics on and you could hear the laughter.

“The worst ones were when everybody was muted. It was like you were in a blank void and just performing standup in a mirror,” she says.

Fortunately for comics and comedy lovers alike, in-person events returned as vaccines rolled out. Rogers said last year’s Boulder Comedy Festival got a tremendous response in both turnout and laughs for the comics.

“People were really happy to be out. The first night, when I said, ‘thank you for coming out,’ the whole audience was like, ‘Thank you for doing this!’ So that was great,” Rogers says.

For this year’s festival, shows are spread throughout Louisville, Lafayette and Boulder. Highlights include a fundraiser for Out Boulder County at Tilt Pinball in Louisville on June 23, as well as a boozy brunch on June 24 at The Tiki Hut in Louisville. Folks interested in the working side of comedy can also register for a standup comedy class Sunday morning before the brunch, hosted by Rogers and comedian Heather Pasternak.

Whether or not the audience finds wisdom from the humor of all the comics, one can all but guarantee a sneeze of a laugh at this year’s festival.

Email questions or comments to editorial@boulderweekly.com