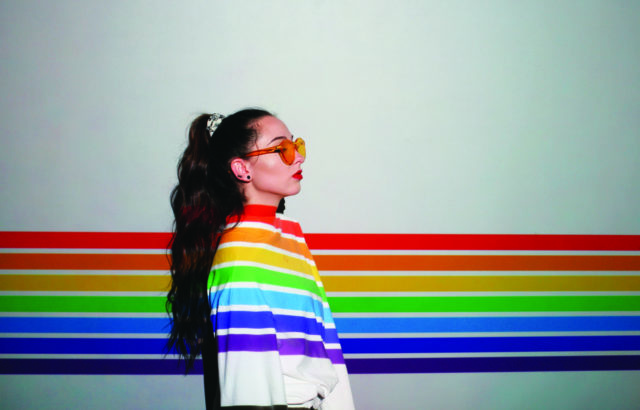 Elaine Waterman was teaching a youth fashion design class a few years ago when she took note of a trans student enjoying the work and realized there wasn’t a fashion program specifically designed for LGBTQ+ youth in Boulder County.

“From the experience of being able to create in a space that was free and open, I realized there was a need for that in (the LGBTQ+) community,” says Waterman, executive director of the Firehouse Art Center in Longmont.

An idea began to germinate, but it wouldn’t sprout until Waterman eventually met Steven Frost, a textile artist and associate chair of CU Boulder’s department of media studies. The two originally intended to collaborate on a project that didn’t pan out, Waterman says, but they kept in touch in hopes of finding something to do together.

For Frost, who uses they/them pronouns, the idea came from an experience seeing an LGBTQ+ youth camp in Maine, something they never had as a teen. Though the original project never coalesced, Frost and Waterman would go on to brainstorm “Slay the Runway.”

Utilizing their experience as artists and educators, the plan was to create a fashion-design workshop where LGBTQ+ teens could explore self-expression with support and guidance. Concerns with the pandemic shifted the schedule for the first year of the program, leading to the sessions split over eight weeks in the fall of 2021 instead of the intended
summer workshop.

Some teens walked in knowing almost nothing about sewing that first year, Waterman explains, but quickly rose to the challenge. Beyond learning practical skills and flexing their creative muscles, giving LGBTQ+ teens the opportunity to explore the intersection between identity and appearance is the main drive. They all designed multiple looks, with one young designer creating moving wings using 3D printers courtesy of the Boulder Public Library’s makerspace BLDG 61.

Creating a safe space for exploration is a personal choice for Waterman, whose youngest child identifies as nonbinary (they/them). Her kid was one of the designers and models during the first year of the program, and Waterman says though they were initially apprehensive about joining, they enjoyed the process so much they created three looks for the final performance.

“For me, (fashion) has always been about self-expression,” Waterman says. “It doesn’t have to do with sexuality, it has to do with how you express yourself and how you see yourself. I think children are very aware of that. Some might be younger, others might take more time.”

Having a safe, supportive environment for the teens also helped open dialogue with parents, Waterman says. The workshop culminated in what she calls the Caregivers Conference, a virtual panel discussion with members of the arts and LGBTQ+ communities in Boulder County, including Out Boulder County and Boulder County Public Health’s Open and Affirming Sexual Orientation and gender identity Support (OASOS).

“Not only was (the program) about giving these kids a chance to create, it was also an opportunity for families to
delve into how to bring that celebratory space home,” Waterman explains.

The feedback from parents and families was positive, especially when it came to learning the language surrounding gender and sexual identity. Waterman plans on bringing the Caregiver Conference component back in some form, though the details haven’t been stitched together yet.

Waterman says she’s glad that this year’s “Slay the Runway” can be the summer workshop she and Frost initially envisioned.

Open to Colorado teens ages 13-18, designers will spend time planning their looks on paper, selecting materials and learning the requisite skills to make the design a reality. Waterman wants the students to work on simplicity in their designs this year, hoping to encourage them toward at least one outfit they can wear outside the catwalk.

“Slay the Runway’’ is free for all aspiring designers, with costs for each student covered with support from OASOS and Boulder Public Library. The eight-day workshop culminates in a professional runway show—complete with a DJ, emcees and professional lighting—presented by the ATLAS Institute’s B2 Center for Media, Arts and Performance at CU Boulder.

“The show last year was just amazing,” Waterman says. “It was a great experience for the kids, because it brought what they designed and wore to a whole other level.”

Applications for “Slay the Runway” are due by June 20 and there are plenty of spaces available for students to sign up, Waterman adds, emphasizing that allies and LGBTQ+ peoples are welcome. Her hope is that some teens who may not have the sort of support they need at home will find the program as well.

Send comments or questions to editorial@boulderweekly.com.