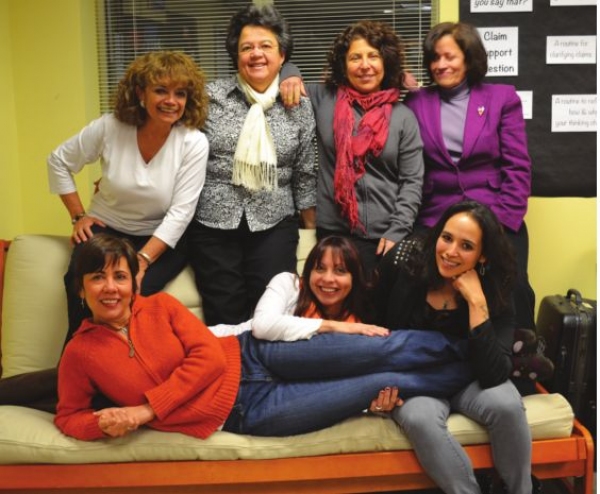 Len Barron, a retired 80-year-old educator, has enjoyed a lifelong fascination with one Albert Einstein. He says he has gone into more than 200 schools since 1989 doing talks on the physicist and education, and for years that included a one-man show he’d perform, trying to spread the gospel of Einstein to the children of Boulder County.

A few years back, he shook things up.

Barron expanded his show to include the tale of physicist Niels Bohr, one of the godfathers of quantum physics and Einstein’s lifelong friend. In 2012, Barron created a play discussing the two men’s characters and designed it to be read by seven grandmothers from the Boulder community, including former state Sen. Dorothy Rupert. Now, one of the other grandmothers, Delia Teresa García, has brought about another version of the play — one translated entirely into Spanish. Instead of grandmothers, the piece stars seven current or retired bilingual Latina schoolteachers.

When García first became involved with Barron’s play — then called Einstein, Niels Bohr and Grandmothers … A Fairy Tale — she was taken by the two physicists’ profound take on education.

“The piece is a story, a fairy tale, about these two men who loved fairy tales, loved children, recognized the value of playing freely, understood the real value of education, and also believed in justice for every human being,” García says.

As a bilingual educator — she worked for more than two decades in Boulder Valley elementary schools — García believed the message of the play important enough to spread to those whose first language wasn’t English. For that reason, she spearheaded the effort to translate the piece into Spanish, her native language. She and Barron have renamed the play Einstein y Bohr … Un cuento de hadas — the lat ter part meaning “fairy tale” in Spanish. Most of the women who are part of this production — García herself, Laura DeCarto, Gloria Lanboy, Nyrna Zalaquett. Ivette Disval, Ana Cox and Lorena García — are bilingual schoolteachers, with one librarian, a businesswoman and an assistant principal in the mix.

“My idea, my goal was for Latino people, for anybody who is bilingual, to have the enjoyment and to listen to this incredible piece, which has so many beautiful and anecdotal bits of advice and bits of wonderful ways of looking at education,” she says. “When you hear something in your second language, you grasp what you’re saying, but when you hear something in your [native] language, you can really understand it on a better level.”

What she and Barron have created is actually somewhat of an oddity in Boulder County. There’s just not all that much Spanish-language theater here. With Census data showing Boulder County’s Latino population growing 14 percent since 2000, they might be on the front end of a trend.

“Now that I’m going around telling people, they actually are very surprised … that the whole thing is going to be in Spanish, delivered by native Spanish speakers,” García says. “I hope we start something new here.”

One of the things that interests Barron about Bohr and Einstein is the fact that both men, despite being geniuses on different intellectual planes than the rest of humanity, cultivated lighthearted, wondrous attitudes towards life.

“Einstein and Bohr [were] like a puppy,” Barron says. “They had a large capacity for enjoyment. … When they talk about geniuses, they don’t talk about the sense of play, which is really absolutely central to their inventiveness.”

The two men shared a love of fairy tales, a love that Barron says enabled their genius.

García says that fascination is one of the quirks that endeared her to the two men. Einstein once wrote an essay called “Education for Independent Thought” that outlined the need for critical thinking in schools, something that resonated with García.

“What [Einstein] said was that we have to create these thinkers that can actually imagine and wonder, and what better to do [than read] them fairy tales, because that’s what the parents did to these two men when they were little,” García says. “They read fairy tales and they felt that by reading fairy tales you feel that nothing is impossible, that if you dream it you think anything can be true. The child needs to play, to experience and learn through touching and laughter. It’s a very important experience.”