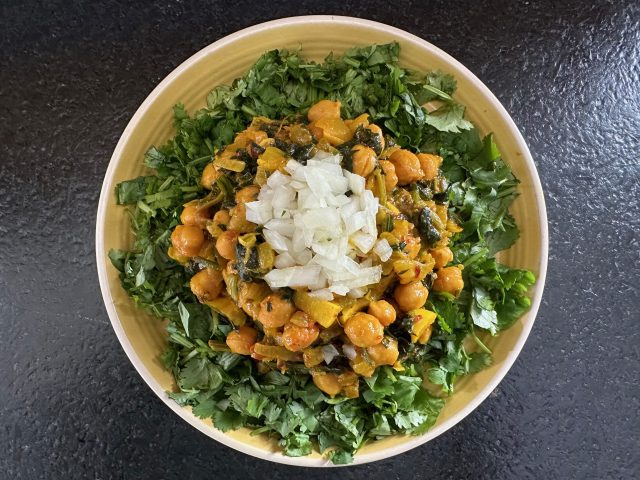 I am confused by veggie burgers, vegan cheese, margarine and all substitutes for animal products that seek to imitate the very thing the eater wishes to avoid consuming. This time of year I’m triggered by the Tofurky, but it’s a year-round phenomenon.

Have you ever seen a meat eater attempt to reconfigure a T-bone steak to look like a pile of beans? I’m guessing no. So why must vegetarians turn beans into burgers? It reinforces the idea that meat eating is somehow more normal, and that vegetarians should try to hide their true selves and pretend to fit in.

Food culture on the Indian subcontinent is the opposite. There, it’s common to see restaurants proudly display their credentials with outdoor signage that announces “Veg and non-Veg” in large type. This delivers the message that veg is normal and non-veg is the alternative. Given that India will soon overtake China as the world’s most populous nation, this dietary preference is fortunate for the earth, and essential for India’s food security. Vegetables are much easier on the climate than meat, and a vegetable-based diet will feed more people from a given amount of land than a meaty cuisine.

Fortunately, Indian chefs have many tricks for making their food so satisfying. They do it with spices, sauces, and lots of chopping. Imitation animal products are not on the menu, yet Anthony Bourdain, as committed a flesh lover as anyone, once said that India is the only place where he could be a vegetarian.

Vegetables are beautiful, delicious and more interesting than meat and most animal products. I love vegetables, despite being an ungulate-hunting omnivore, and I love vegetarians – except some of those who give me grief for hunting. A meat-free lifestyle is a beautiful thing, so don’t apologize, vegetarians! Don’t try to play somebody else’s game with your dry, wannabe sausages. Be proud of your choices and flaunt your lifestyle. Veg is beautiful, and so are you.

A New Jersey-based vegetarian friend of mine named Matthew has been texting me some of his favorite unapologetic vegetable dishes that proudly celebrate the true identities of their ingredients.

He’s lucky enough to live near the West Windsor Community Farmers Market, pound-for-pound one of the nation’s best, which gives him access to a year-round diversity of produce and fungus.

Mushrooms, with their earthy diversity, deliver meaty satisfaction without trying to be meat. Matthew is fluent in what each variety brings to the table, and each week he brings home some combination of maitake, oyster, shitake, black pearl, trumpet, enoki, lion’s mane, chicken of the woods and others. They pack a decent amount of protein content alongside their dark, rich flavors, and he adds fungus to his meals the way I add bacon bits to mine.

Here are two of his favorites: First, a simple dish of broiled brussels sprouts with mushrooms. Next, an Indian-inspired meal of chickpeas with turmeric and lemon.

With so many benefits to the veg life, and a never-ending supply of flavors, why pose as a meat eater? Embrace your lifestyle, vegetarians, and give it a squeeze.

The recipe calls for maitake mushroom, which looks like a dense head of curly hair, but any mushroom will work. Since fancy fungus comes with a fancy price tag, one frugal trick is to use normal mushrooms like button, crimini or portabella to augment a smaller amount of exotic species. The cheaper ones will absorb the flavors of their pricey cousins, extending their impact. Either way, it’s going to be cheaper than meat.

Combine all the ingredients in an oven-safe pan and broil for about 15 minutes, stirring often, until the outer leaves of the Brussels sprouts get crispy.

The raspy flavor of the turmeric, the piercing bite of the lemon, the herbal aroma of the cilantro and earthy, dare I say meaty flavor of the spinach combine for a dish that is both simple and complex.

While practicing this recipe I realized that it’s a mere stone’s throw away from the popular Indian dish channa masala, so I made a sub-batch with cumin, tomatoes and garam masala spice mix, just to see how it compared. To my surprise, the family preferred Matthew’s simpler version.

If you’re wondering why I added some baking soda, it’s to soften the chickpeas. This trick works on all beans, and can save you hours of simmering if you don’t like them crunchy.

Chopped onion as a garnish

In a heavy-bottom pan, sauté the onions, garlic, and ginger in the oil. When the onions become translucent, add the salt, lemon juice, garlic powder, red pepper, and stir it together. After five minutes add the chickpeas, including the water in the can. Add the baking soda if you want softer beans. Adjust seasonings to taste as it simmers. When you are satisfied, and the liquid is gone, add the spinach and cook until the spinach has melted into the beans. Turn off the heat.

Fill the serving plates with generous heaps of chopped cilantro. Scoop the chickpea mixture on top, and garnish with chopped onions.