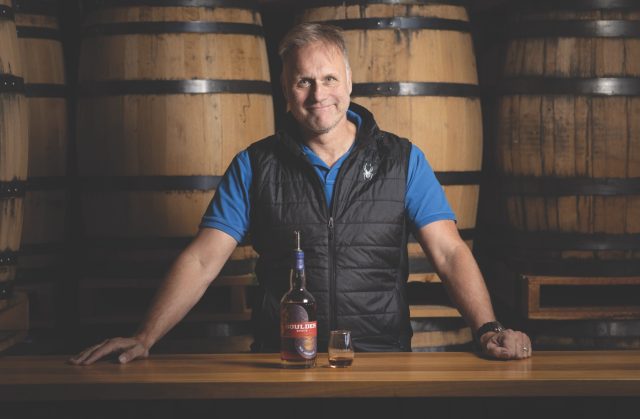 “I tell people that we’re rich in whiskey, but poor in cash,” jokes Boulder Spirits (5311 Western Ave., #180, Boulder) owner and founder Alastair Brogan. Yet the native Scotsman, who moved to Boulder full-time about 10 years ago, isn’t kidding around when it comes to giving back to the community that helps support his craft hooch. Brogan’s growing whiskey company has donated to victims of the Marshall Fire as well as to charitable causes including The American Heart Foundation.

“So far our biggest effort has been for the victims of the fire,” Brogan says. “We got the fire chief in here with some of the firefighters and filled 500 bottles of whiskey with their assistance. We sold the bottles at an inflated price and were able to write a $40,000 check to the Boulder Community Foundation. We also did a thing with Von Miller where he signed a few bottles and we sold those off for charity; and we just raised money by auctioning off a full barrel of whiskey for the American Heart Foundation. The winning bid was $11,000. We love doing it, and people also get some whiskey for their money.”

Boulder Spirits’ award-winning water of life is clearly something that discerning drinkers appreciate. Among other liquors, Brogan and company, who are proud to include a 1,000-gallon (copper) Forsyths still in their production arsenal, produce high-malt bourbons and American Single Malt whiskeys, using a distiller’s mash of malted barley from Europe, aging their products in freshly charred American Oak barrels for a minimum of three years. Understandably, the native Glaswegian is proud of his independent Colorado operation.

“A true craft distillery makes their own product,” he imparts in his Scottish burr. “We’re not owned or financed by a large organization and we don’t source our whiskey. We’re a grain-to-glass operation. We also make a really good gin, but we’re focusing on the whiskey at this point because I think that’s where the company’s future is. We’re focused on American single malt whiskey, which is becoming an official whiskey category in the next few months (as designated by the U.S. Alcohol and Tobacco Tax and Trade Bureau). It will be the first new category in 55 years. This helps with rules and regulations that protect producers so people can’t undercut them. ”

Boulder Spirits, which has been distilling since 2008, offers a few intriguing items for the holidays, including their popular “Whiskey Adventure Kits” (sample packs that include six 50-ml bottles of their brown liquors), and a new high-potency (133.8 proof) cask-strength bourbon that was aged for more than five years. “It’s great whiskey, but it’s like dynamite,” Brogan warns with a chuckle. “The American palate loves sweetness, because they were brought up on that, but Europeans like to taste the malted barley, which calms down that sweet a little bit and adds another flavor to the bourbon.”

The whiskey makers also offer a new line of bitters in partnership with their Boulder-based “sister company” Cocktail Punk, including an old fashioned syrup, ginger bitters and elderberry bitters.

With the holidays upon us, it’s a good time to hunker down and enjoy what our local artisans provide. Maybe make a bourbon pecan pie, or savor a single malt by the fire as the snow blankets the ground.

“I’ve just come back from Scotland, and they already had Christmas decorations out,” Brogan shares. “We start counting down early over there.”