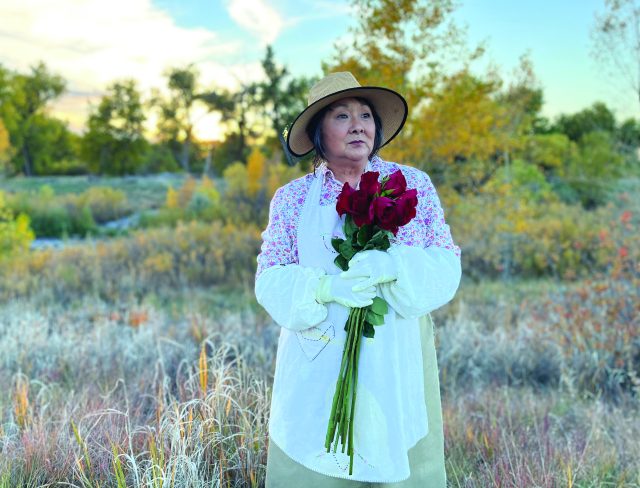 Denver’s Sakura Square is haunted. But it’s not the usual apparitions stalking the city’s historic Japanese American neighborhood in ZOTTO, the new immersive production opening this weekend. Instead, it’s the ghosts of racial strife, past and present: historical horrors like Japanese internment during World War II, alongside the discriminatory inheritances of redlining, resettlement and gentrification.

The show follows Dr. Kitsu, a kitsune (a fox spirit from Japanese folklore) who invites the audience to journey through the ZOTTO Holistic Health Office. They are tasked with helping a fifth-generation Japanese American patient named Miya locate her grandmother. This leads visitors into an interactive world where they come face to face with our troubled past. And it all takes place inside a Sakura Square building full of vacant offices in Denver’s LoDo District, where the city’s once-thriving Chinatown was destroyed by a white mob in 1880.

The Front Range may not be top of mind when it comes to such cutting-edge theatrical experiences. But with outside-the-box productions like DCPA’s Theater of the Mind — whose run was recently extended through January due to public demand — and interactive art mainstays like Meow Wolf Denver’s Convergence Station, the region is making a case for itself as a hub for experiential art.

“Denver is becoming known as a place to create new immersive work,” says Courtney Ozaki, founder of the Japanese Arts Network, and creative producer of ZOTTO.  The group recently took part in the Denver Immersive Gathering, an international networking event and exhibition for immersive creators.

ZOTTO was presented there as a work-in-progress, attended and critiqued by immersive and experiential entertainment professionals from all over the world. “It was super exciting to have a Disney Imagineer in the audience during the convention,” Ozaki says. “We were honored to get their perspective and receive positive validation from other creators at the top of their field about our work.”

But Ozaki hopes ZOTTO will do more than validate the artistic efforts of her team. She hopes it will raise awareness of Colorado’s lesser-known histories by exploring the trauma and joys of three generations of Japanese American women in Denver.

ZOTTO is a group effort in the truest sense of the word. The work was produced by the Japanese Arts Network — a national organization that brings together communities, stakeholders and artists to support Japanese arts in America —  in collaboration with Control Group Productions, Luster Productions and Theatre Artibus.

After the success of a previous drive-through iteration of the project during the early days of the COVID-19 pandemic, Ozaki put together a team to produce a more developed version of the show. She asked Akemi Tsutsui-Kunitake to be the project’s cultural consultant, and Meghan Frank and Buba Basishvili to co-produce. Leah Podzimek came on board to co-produce and serve as director of flow and fundraising, while Patrick Mueller and Caroline Sharkey were brought in to support the technical elements.

The result of this all-hands-on-deck approach is a celebration of how the Japanese community survived in America after World War II. The experience’s script was written by Ozaki but revised by actors through improvisation, producer collaboration and community interviews. The narrative was inspired, in part, by Ozaki relatives’ stories about being detained during the war.

“People have a hard time relating to stories of incarcerated individuals when told from textbooks or other traditional forms of media,” Tsutsui-Kunitake says. “That’s what’s so great about immersive experiences. We get to put people in these true stories … that allow people to reflect on their actions; that’s more powerful than if we just told the story to them.”

To that end, attendees should prepare themselves for a multi-sensory experience. “We want folks to engage all five of their senses,” Podzimek says. “People will taste things; we’re using next-level sensescapes so you can smell elements of the journey; you’ll hear all sorts of things through sound design and dialogue; you’ll see the actors and set, and we’re working on creating components for people to touch along the way.”

This style of immersive theater is a relatively new art form, and the group realizes this will be a new experience for many. “It can be exciting, but it can also be uncomfortable at times,” Tsutsui-Kunitake says.

Part of that intentional discomfort comes from direct interaction between the actors and audience members, who are a crucial part of the experience.

“This is a show with only 12 audience members at a time, which will be very intimate,” Ozaki says. “You are not a voyeur. You are in the show and will be acknowledged.”

Ultimately, the team behind ZOTTO says such an intimate, immersive experience was made possible by community members and partners with an appetite for social justice and experimental storytelling.

“The reason that we were able to tell this story now is that there was such an immense amount of support for the story,” Frank says. “I am very excited for the audience to be able to experience this particular story in Sakura Square, one of the last visual spaces that represents the deep and rich culture of Japanese American history.”