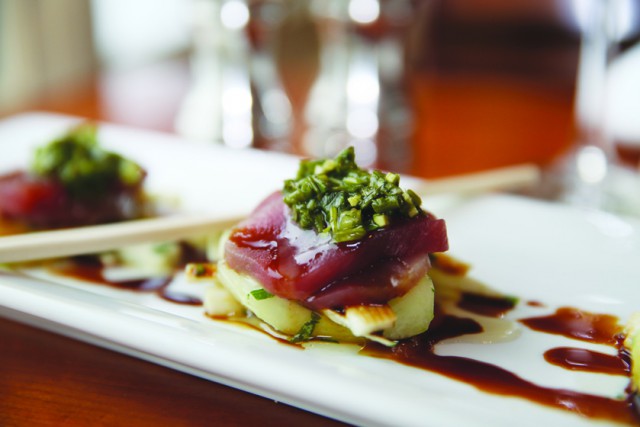 The Hotel Boulderado spent much of this year revamping its culinary amenities with overhauls transforming the basement-level Catacombs Bar into License No. 1, and the upstairs and upscale sitdown, Q’s, into Spruce. The, ahem, “sprucing up” was finished and launched in August, and those readers that haven’t yet had a chance to stop in and see the overhaul first hand are missing out.

The interior redesign worked to bring out the original moldings and carpentry of the historic hotel for lovely effect, making for an atmosphere that feels classy and approachable at the same time.

The same can be said of the menu at Spruce, which follows the downtown Boulder model of simple American standards done well.

The smoked porkloin chop from the big plates menu ($23), served with roasted potatoes, seared greens and a fresh vegetable succotash is delectable, with the sweet tang of pork perfectly complimented by the smoky bourbon barbecue au jus sauce.

The large bowl of caramelized brussels sprouts from the small plates menu ($7) is another standout dish, taking something decidedly unexciting on the surface and making it sing through thoughtful preparation and seasoning. Take note parents: this is how you make kids not just eat, but demand brussels sprouts.

Another example from that line of thought is also found on the small plates menu: the grilled Palisade peach, which is stuffed with basil chèvre, prosciutto and arugula and topped with a sweet balsamic drizzle. The roasting brings out an even sweeter flavor and meatier texture in the legendary peach.

The Colorado striped bass ($24) served with olives, artichokes, sundried tomatoes and capers, is a light and lovely meal, and the rotating selection of market-priced oysters from the oyster bar are about the best you’re likely to find this far inland.

The most impressive item on the seafood menu may be the crispy whole snapper, which is served with roasted red potatoes, almonds and slaw in a Romesco sauce for $26. I didn’t get a chance to try it, but felt the immediate onset of orderer’s remorse when a server delivered one to my neighbor’s table. Plated, the full deep-fried fish had a regal appearance like the first appearance of a Thanksgiving turkey.

The dessert menu isn’t easy to pick a single item from, but this reporter would recommend the peanut butter French silk tart, which is made with salted peanut brittle, vanilla beans anglaise and cocoa sauce. It is a mic-dropper of a dessert; richer than Trump, sweeter than victory and capable of completely wiping away one’s cares for a spell. Until you make it back to the gym, anyhow.

Spruce is a bit too expensive for the average wage-earner to become a regular at, but it’s also affordable enough that you can splurge without skipping a house payment. And if you’re looking for a nice but low-key night out, Spruce is just the thing.