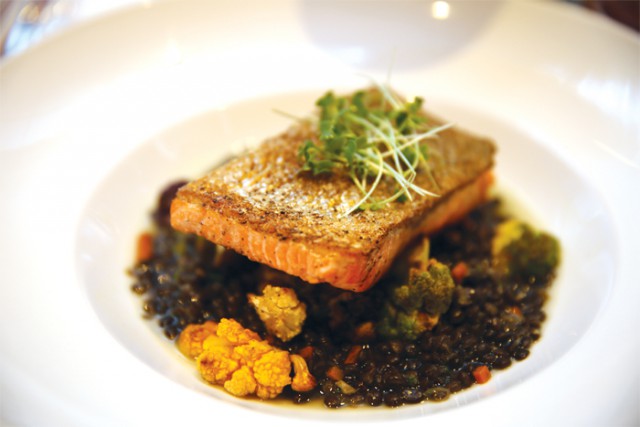 Well readers, it’s that time. After a year of locally sourced food puns and stuffing my face like I’m trying to turn my own liver into foie gras, I’m taking a job in Oregon, making this my last food review for Boulder Weekly. And it figures. Like so many good things, they come around right at the wrong time to fully enjoy them.

I’m speaking of Blackbelly Market, the long-awaited and recently opened restaurant from caterer, Top Chef, and sausage-o-phile Hosea Rosenberg, who Claus-like, made a list of nice restaurant elements, checked it twice and knocked it out of the park on almost all accounts.

To illustrate the almostness, here’s me trying to explain Blackbelly’s location to a companion meeting me for dinner: “It’s, uh, on Arapahoe, sort of on the left, but you won’t really see it… You know what: You better Google it.”

But the grievous city design flaws that haunt the parts of Boulder not built by pioneers are hardly the restaurant’s fault. They’re just working with what’s available. And doing a great job with it.

Blackbelly’s interior is tile, wood and piping, giving the decor a comfortable and solid feel, somewhere between a brightly lit corner shop and a neigh borhood pub. The kitchen is exposed, separated from the dining area only by a counter seating area similar to a diner.

But instead of dubious hashbrowns and “brown” gravy, Blackbelly is making food people should be eating.

The house-made sausages on the small plates menu ($6) are a delight, with rotating varieties and bold flavors. The hatch green chile posole ($6) is made from green chiles sourced from New Mexico and a house-smoked pork shoulder. In a region where food culture is as built on green chili as Jefferson Starship alleged San Francisco was built on rock and roll, Blackbelly’s still stands out as one of the best.

The ricotta cavatelli ($17) is a powerhouse pasta platter, with roasted mushrooms and and greens mixed up with handmade pasta and an egg. It’s as rich as flourless cake, with a flavor and texture like heavy cream, but no actual cream.

One of the most striking dishes is the prawns and pork belly ($22), which comes served on a special variety of smoked cheddar grits that Rosenberg sources from a boutique farmer in the South. They are without doubt the best grits this reporter has ever had, and even better with the collard greens and all-kinds-of-bold redeye gravy.

The summary is that Blackbelly Market is the total package. It’s nice but approachable; it serves comfort food, but comfort food that’s far from ordinary; it’s focused on local, organic and in-house ingredients, but is willing to buck religion and go elsewhere if it’s to fetch a better product like the grits. Were I going to be around to enjoy it, there’s a strong likelihood that Blackbelly Market might be my favorite Boulder restaurant.

Then I got the bill. Ouch.

Sorry Blackbelly. But until journalists start getting paid like lawyers, Illegal Pete’s is going to have to stay on top a while longer.