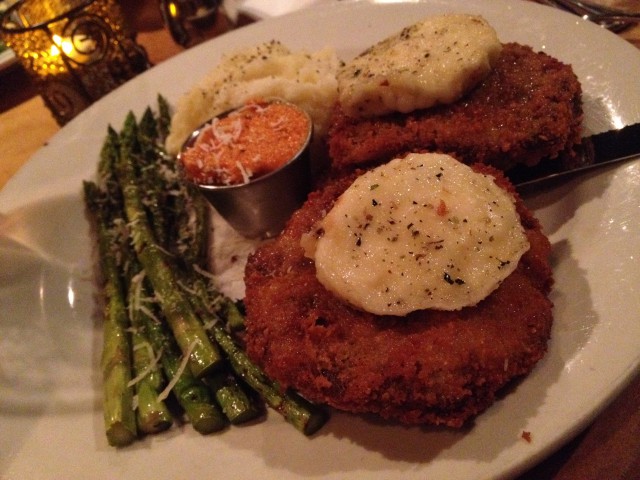 Perhaps one of the greatest joys in eating out is wandering into somewhere new on a whim and finding greatness. That’s probably not an experience you’ll have at Dagabi Cucina.

Not because the food isn’t fantastic, but because while most Boulder restaurants are clustered in one of the city’s two walking neighborhoods, or in major-roadway stripmalls you could easily wander into, Dagabi Cucina is tucked away in the back spot in a lonely shopping center deep in the residential northern section of Broadway and only open from 5 p.m. to 9 p.m. daily. About the only Boulder restaurant less prone to random walk-ins that comes to mind is the mountain-top Flagstaff House. If you want to go to Dagabi, then you’ll probably have to plan ahead.

And that’s a plan worth making.

The space is deceptively large, with a patio and three dining areas (including a bar), all decorated in a simple and classy feel.

My dining companion and I both moved to Boulder from Boise, Idaho, the city with the largest Basque population outside of Europe, so the menu was populated with delights we feared might have been left behind in Spudtown, such as croquettas de pescado (bite-size seafood fritters for $7), and manchego cheese available on almost anything. Considering those selections, it was a little surprising not to see kalimotxo on the drink menu, but not as surprising when looking at the décor, which was a few notches above combining red wine and Coca- Cola on the class belt, no matter how big it is in Europe.

I settled on filetes rusos ($18), a sort of Spanish chicken-fried steak made by batter-frying a pork and veal patty and sandwiching it between grilled tomatoes and grilled mozzarella, with manchego mashed potatoes and grilled asparagus on the side. It was rich and filling, not too greasy, and had a nice bite of tang from the red pepper sauce that came with the dish for dipping.

But as satisfied as I was with my Spanish comfort food, I got a bit jealous at my dining companion’s plate. Recently spurned by a mediocre pollo marsala, I’d passed it over on the menu. But just the few pilfered bites I had redeemed the dish with its perfect combination of sweet and hearty. The combination of green beans and artichoke hearts served on the side was a nice touch.

The menu also features a variety of pizza and pasta dishes, many with heavy seafood elements. The lasagna de la nona (rolled seafood and vegetable lasagna,vodkatomato-cream sauce and greens for $18) certainly stood out, as did the fact that we were visiting Dagabi on “paella Monday.”

But one of the biggest features on the menu is the selection of tapas, available from 5 p.m. to 6:30 p.m. daily, and all night on Tuesdays. Though it’s an even narrower window of time in which one can visit Dagabi to get a crack at the tapas menu, it’s worth it. Plates range from $3-$8 and there are dozens of different offerings, including simple choices like olives, sauteed mushrooms or cheese plates, to more complexly flavored dishes like Moorish pork skewers, ham-wrapped dates and full pizzas.

“More people should know about this place,” my dining companion said on our way out the door.