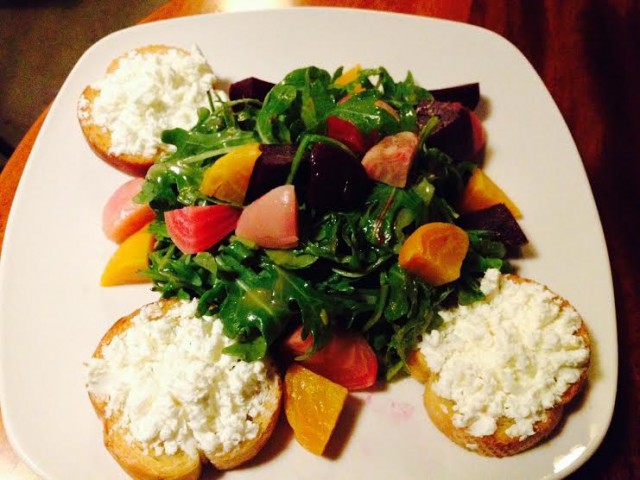 Boulder’s strict growth boundaries make heading north on Broadway a bit of a cliffdrop, with the city ending abruptly as the street y’s into U.S. 36. But nestled right up against the edge is a restaurant that would be as at home in the urban core as it is on the fringes: The North End at 4580.

The eatery follows a well-trod path in Boulder, with upscaled takes on American classics served in a relaxed atmosphere. Large south-facing windows in the dining room let in loads of natural light (and, at certain times in the afternoon, loads of glare off the polish of the tables), and the decor is largely comforting wood and soft tones. The feel is bright, fresh and clean.

That feel continues onto the menu, which strikes a fine balance between heavier comfort foods and lighter offerings.

The roasted root vegetable and lentil salad ($9) is a perfect example. It starts with a bed of French green lentils, then mixes in carrots, pomegranate seeds and other root vegetables.

And it was. But a light herb vinaigrette dressing gave the dish an unexpected freshness that went well with the browner flavor of the lentils. Its lightness also comes in the fact that it’s not a particularly filling dish, but it’s a nice pairing of flavors that are good for you.

Another standout offering is the burger ($11.95), which despite its half-pound patty and caramelized onions, manages an almost fluffy feel from the combined juiciness of the patty and a thick, airy bun. With the butter leaf lettuce and garlic aioli, it feels positively airy. Swap the fries out for a salad and the effect is magnified.

The North End also offers a rotating weekly burger/sandwich option that gets a little more experimental.

Another standout offering from the sandwich selections is the pastrami on rye ($12). Granted, bad pastrami is about as rare as blue whales, but The North End still does it right, with Swiss cheese and stone ground dijon on grilled rye.

My only complaint on both of those dishes is the pickle. Don’t misunderstand, it’s a mighty pickle, a fulllength, quartered wedge. But pickles are nearly as divisive an issue as the proper role of the federal government. Anything they touch ends up absorbing their flavor, which is fine if you’re pro-pickle, but I’m most definitely not. And it’s always frustrating when restaurants don’t mention its inclusion on the menu. That’s why I was stuck with a light case of picklemouth on both sandwiches I tried at The North End at 4580.

Other interesting options at The North End include lobster mac and cheese ($13), pan-seared duck ($26) and vegetable risotto ($15.50).

The North End at 4580 exists in a perfect space where you can upscale your experience a bit, but without going overboard.