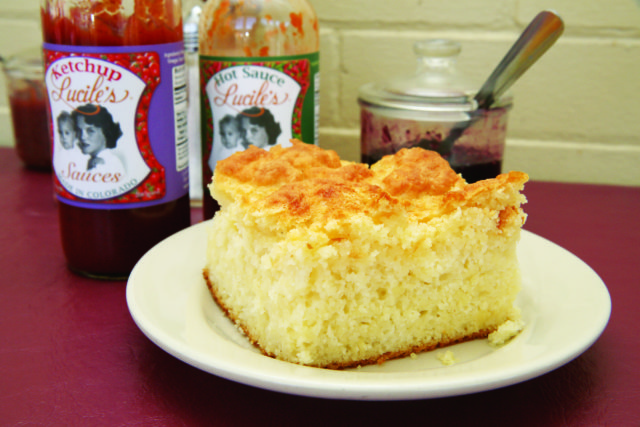 On Tuesday, Oct. 4, America’s favorite minimalist foodie Mark Bittman released How to Bake Everything, the fifth installation in what has become a beloved franchise and a staple graduation gift for incoming college freshmen across the country.

Now, to be honest, despite growing up in the foothills of North Carolina watching many a folk make buttermilk biscuits from scratch, it was Bittman (and his book that started it all, How to Cook Everything) who taught me to bake tender, flaky buttermilk biscuits (sorry, Mom). I was one of those incoming college freshmen who received the red tome before leaving home, despite having little more than a microwave and a coffee maker for the first two years of college.

In honor of Bittman’s five-year journey to create How to Bake Everything (and his 20-year mission to teach all of us how to cook everything), I thought I’d write about some of the best buttermilk biscuits in Boulder County, those at Lucile’s.

The cherished Creole eatery needs little to no introduction or fanfare since it’s been going strong at the pale-yellow Victorian house on 14th Street for more than 35 years. The restaurant in Boulder is the original in what has become a small (but growing) chain of six Lucile’s in the Denver metro area. If you’re new to Boulder or just visiting, make the effort to get to Lucile’s, maybe on one of these perfect fall days where the sun shines bright and the air is crisp. If you’re really lucky, you’ll get a seat on the porch where you can do a little people watchin’ and enjoy the season. But don’t worry if it’s too cool or busy to catch a seat on the porch. Inside Lucile’s you’ll find a cozy table set with cloth napkins and homemade jam. Zydeco music gently drifts through a dining room decorated with Mardi gras beads, masks and Creole posters.

But ambience ain’t what we’re here to talk about. Lucile’s makes nearly everything from scratch: jam, fresh-squeezed juices, gravy, chicory coffee, beignets and sausage. There are lots of foods at Lucile’s worthy of intense focus, but as a Southerner, I find myself drawn to their giant, homemade buttermilk biscuits.

Buttermilk is a staple in baked goods for a couple of reasons. First, and most obviously, is the subtle tangy flavor it imparts to the finished product. The acid in buttermilk helps give baked goods more lift, making biscuits lighter and fluffier, and it also prevents overcooking by creating a more alkaline environment in the baked good.

In particular, Southern cooking has historically made buttermilk a staple ingredient as unrefrigerated fresh milk soured quickly in the southern heat. Buttermilk, the heavy cream leftover from churning butter, ferments from naturally occurring lactic acid bacteria. It simply has a longer shelf life and, consequently, that delicious tangy flavor.

So it makes sense, as a Creole eatery, that Lucile’s would serve up a master example of the buttermilk biscuit. As big as an appetizer plate, these biscuits achieve the perfect balance between the moist, airy center and the ever-so-slightly chewy top. They open into halves with nary more than a gentle pull, perhaps a result of folding the dough over on itself once more before cutting the biscuits into rounds and placing them in the oven.

To be honest, Bittman says buttermilk is his second favorite choice when making biscuits; he prefers yogurt.

Yeah, they’re good that way, I reckon, but maybe Bittman and I will just have to disagree on that point.