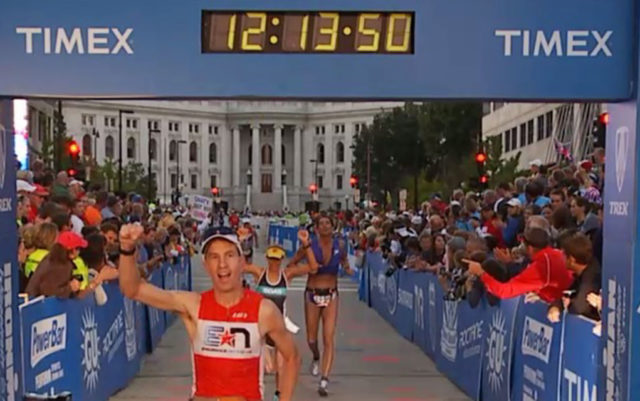 Injuries often take athletes out of the game, but for Boulderite J.T. Thompson, a fractured neck gave him the push he needed to enter the world of triathlons. The call to action began in 2007, when a family skiing trip became a freak skiing accident on the slopes of Verbier, Switzerland.

“I was skiing with my two kids in a foot-and-a-half of powder. I hit a boulder that was buried underneath the snow and kind of tucked and rolled and landed on top of another boulder,” Thompson explains.

He tried to get up but couldn’t. He stopped moving, knowing something was wrong with his neck. His sons, then 11 and 12, were skiing alongside him when the incident took place. Still conscious, Thompson was able to give them instructions on what they needed to do. He did his best to keep his neck stabilized and conserve his energy, but it was the end of the day, the slopes were barren and the sun was beginning to set; Thompson knew it was going to be a race against time to get him the mountain.

“I knew I couldn’t spend the night there. It was like, ‘Alright, I’ve got to get off this slope or I’m going to be dead,’” he says.

Thompson laid on the slope about an hour before ski patrol was able to get him into a helicopter and on his way to the hospital.

It turns out the rock had missed his spinal cord by about an eighth of an inch, making it possible for the fracture to slowly heal itself. He was given anti-inflammatory medication and brought back to the hotel where his kids were waiting eagerly to hear all about the helicopter ride. Three days later, the family flew home.

“I can still visualize it happening and kind of looking around that slope and stuff,” he says. “The crazy thing was that if I had landed 2 feet to the left of where I did, I would have landed in a foot-and-a-half of powder and nothing would have happened,” he says.

A month after the accident, Thompson was sitting on the couch, feeling pretty miserable in a full neck collar that was making sleeping difficult. He was flipping through channels on the TV when he stumbled on a replay of the 2006 Kona IRONMAN 70.3 World Championships. Engrossed, he decided then and there he was going to become a triathlete and compete in an IRONMAN.

Thompson worked through a grueling month of physical therapy. He hired a coach for beginning triathletes to help him gain the endurance he needed to compete in a 70.3 half triathalon. He built up his endurance to be able to swim 1.2 miles, bike 56 miles and run 13.1 miles. Because his motivation to train was self-directed, his motivation to heal grew even stronger.

A year after the accident in Switzerland, Thompson was competing in his first half triathlon, the Doc and Sok in Watchung, New Jersey, adding 10 more 70.3 triathlons to his list before a bike accident in the 2011 New Jersey Gran Fondo put his hard work on hold. Thompson shattered his collarbone, broke three ribs and punctured a lung.

“And after about five months when that all healed, I couldn’t raise my arm above my shoulder. It turned out I had nerve damage in my shoulder,” he says.

The extent of his injuries landed him on an operating table in New York City, where he underwent a microscopic nerve decompression surgery. What was supposed to be an hour-and-a-half outpatient surgery turned into a six-and-a half-hour nightmare.

“But then, to make it more fun, when I got to the recovery room, the left side of my throat, tongue and vocal chords were all paralyzed,” he says.

It took doctors five days to determine that Thompson had a stroke on the operating table due to changes in blood pressure caused by an undiscovered hole in his heart. (Thompson’s case was later written about in a medical journal.) It was six months before Thompson was set to compete in IRONMAN 70.3 Wisconsin. All he could think about was getting to the start line.

“In that situation, I was like, alright, I’ve got six months to get myself so I can swim. Because I know I can run and I know I can bike with a bum shoulder, but it’s the swimming that’s going to be the challenge,” Thompson says.

After four months of physical therapy, Thompson competed in IRONMAN Wisconsin, and while it may not have been his best race ever, he did it.

“It was very satisfying to get that done and subsequently I continue to kind of press on,” he says.

To date, he’s competed in six IRONMAN races. In September he competed in Australia’s IRONMAN 70.3 World Championships, qualifying for this race at the Boulder IRONMAN back in June. With 83 countries representing some of the best triathletes in the world, the race for J.T. Thompson was all about sticking to his plan and just enjoying himself in the moment.

“In my age group I was probably in about the 70th percentile. I mean, I wasn’t near the front and stuff,” he says. “I was out on the course and I was running pretty well and I was getting passed by a number of people. It just kind of struck home that when you get to that World Championship level, there’s a lot of really good athletes from around the world.”

When asked if he considers himself a true “iron” man, Thompson credits mental endurance and his triathlete community as the inspiration for his perseverance.

“Trust me, when you’re in the middle of an IRONMAN, sometimes you have those conversations with yourself like, ‘What the heck am I doing this for?’ But as I got into [racing] what I really found is I enjoyed the whole triathlon community and lifestyle and staying fit and having that goal out there and doing the training sessions with people that will help you achieve that goal,” he says.

Thompson and one of his sons are signed up for the Runner’s World half-marathon in Bethlehem, Pennsylvania, on Oct. 14. After that, Thompson plans on taking a break from swimming to focus on biking, running and skiing for a while. But one thing is for sure: There’s no stopping J.T. Thompson.